Liberty Delivers a Better World While Utopians Promise a Perfect One 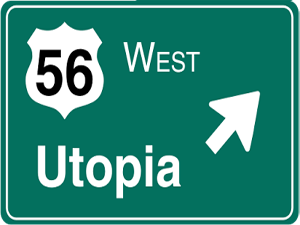 Why are unattainable utopian visions attractive and inspirational to so many while the promises of liberty, under which a vastly-improved society can actually be attained, are so often disregarded? Leonard Read, among America’s most prolific defenders of liberty in the 20th century, considered that question.

In Let Freedom Reign, Read argued that liberty’s failure to gain more adherents than utopian statism derived in substantial measure from the fact that the ends envisioned, rather than the means involved, often motivate people. Unlike the utopian visions, the freedom philosophy recognizes that a system of free markets is an “amoral servant” that does not claim to generate no objectionable results to anyone. For this reason, liberty faces an inspirational disadvantage.

A good illustration of utopianism’s “advantage” over freedom is the utopian’s assertion that he can deliver equality of results (implicitly assumed to be equality at a high level of prosperity). This in turn leads to rationalizations for cutting freedom off at the knees. Yet some forms of inequality are inseparable from astounding social benefits, particularly the massive gains from specialization among people with differing abilities and circumstances, coordinated through voluntary market arrangements.

As Read noted in Having My Way, rather than bemoaning any inequality of results, it would be more accurate to say, “inequality exists, fortunately!” as long as it is combined with freedom, which he called our “working handmaiden.”

[F]reedom and equality are ... mutually antagonistic. The equality idea…rests on the antithesis of freedom: raw coercion. It is ... impossible to be free when equality is politically manipulated ...

Not our likenesses, but our differences, give rise to the division of labor and the complex market processes of production and trade ... it is to our advantage to specialize and to trade with other specialists. ... By thus serving others — and becoming ever more skilled and outstanding (unequal) in the process — he best serves his own interest.

Read recognized that inequality among individuals was a fact and that the “working handmaiden” of voluntary arrangements allowed the members of society to better achieve what they desired. As a result, Read also saw that attributing disliked results, such as deviations from an idealized equality, to voluntary arrangements, misplaced the blame. Those deviations are rooted in an underlying reality utopians simply assume away. Therefore, restricting voluntary arrangements, beyond preventing force and fraud, cannot solve the real problems that arise from scarcity. However, the attempt to do so hobbles the market’s ability to coordinate the productive plans of people with vastly different skills and circumstances, causing harm in the misguided attempt to accomplish good.

Read saw that liberty’s defenders must face the fact that markets are amoral servants which enable people to do whatever they want better. They cannot be relied upon with certainty to only do good and inspirational things. But whenever they enable doing ill, they only reflect the desires individuals have. If we reformed ourselves, markets could do no harm. In contrast, coercively “reforming” ourselves by law does not eliminate the cause of such harm and so does little to actually stop it. Moreover, the restrictions on markets adopted in the process throw out the amoral servant that allows us to accomplish greater good than achievable via any other known means.

This brought Read to focus on the crucial distinction between “inspirational” utopian ends and the means such ends necessarily entail. The collectivist means, backed by force, that utopias require are immoral, so such systems cannot be moral.

Examine carefully the means employed ... in terms of right and wrong, and the end will take care of itself.

However lofty the goals, if the means be depraved, the result must reflect that depravity.

[M]eans implicit in the individualistic goal ... serve as a powerful thrust toward the individual’s material, intellectual, moral, and spiritual emergence ... those who comprise society ... are the secondary beneficiaries. ... If we would help others, let us first help ourselves by those means which qualify as righteous.

Visionary or utopian ends inspire some to pursue statist failures, sacrificing liberty for innumerable “good causes.” Read argued powerfully for instead focusing on the means (voluntary versus coercive) rather than stated ends that can be achieved only in someone’s imagination. Because the means utilized by statist “solutions” are immoral, such systems are morally inferior to voluntary arrangements.

Leonard Read recognized that liberty, which produces voluntary arrangements that evolve once one’s rights to one’s self and production are protected, provides the means of achieving the best that is actually achievable in advancing society. As we develop ourselves, we each have more to offer others, without requiring immoral acts. And what freedom has historically accomplished, beyond anyone’s ability to envision it, extended to further as-yet-unknowable possibilities, provides ample reason to trust it over coercive alternatives.

Defending liberty requires developing our ability to “see” the unseen (and often unimagined) good that can only be accomplished by freeing people’s ability to peacefully create and innovate. We must also be able to “see” and articulate the inherent failings of the coercive and immoral means employed toward utopian goals, which are unachievable despite such means. With such vision, liberty can be recognized as far more inspirational than any statist alternative.