Let Slip the Dogs of Secession 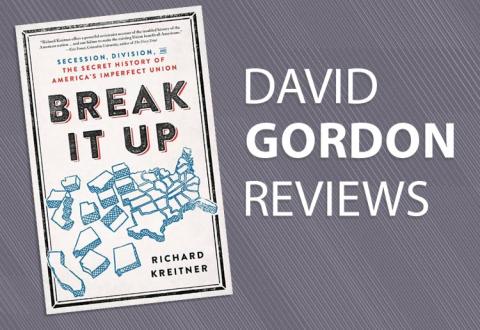 Break It Up: Secession, Division, and the Secret History of America's Imperfect Union
by Richard Kreitner
Little, Brown, 2020
viii + 486 pages

The extreme polarization in American politics today has led many people to ask: Is the United States too large? Don’t people who find the centralizing policies of the Leviathan state oppressive have the right to leave and govern themselves? Ron Paul thinks so. As Richard Kreitner notes, “Ron Paul called secession ‘a deeply American principle.’ For a country founded in the act of secession, Paul argued, there was ‘nothing treasonous or unpatriotic about wanting a federal government that is more responsive to the people it represents....If a people cannot secede from an oppressive government, they cannot be considered free.’”

Dr. Paul has many precursors for his view. As Kreitner observes, in 1863, the individualist anarchist Josiah Warren argued that “individuals were inherently sovereign; no government could legitimately wield power over them. ‘A state or a nation is a multitude of indestructible individualities, and cannot, by any possibility, be converted into anything else!’ Warren declared. He called for ‘a “Union” not only on paper, but rooted in the heart.’ As for the [Civil] war, Warren opposed slavery as the most extreme possible violation of individual sovereignty, but he could find no justification for forcing the South back into the Union. As he wrote, ‘There can be no secession from the freedom to secede!’”

You may wonder whether this position, held not only by Paul and Warren but by Ludwig von Mises and Murray Rothbard as well, is extreme within the context of American history. It is the great merit of Richard Kreitner’s excellent book to show that it isn’t. Kreitner, a writer for The Nation who has devoted five years of research to Break It Up, shows the remarkable extent to which disunity is the dominant theme in American history. He is by no means a supporter of the free market, and his own policy proposals, such as a call for action against “the coming climate chaos,” are best ignored. Nevertheless, his work is of great value to us. It covers American history from colonial times to the present, but I’ll concentrate on only a few items of particular interest.

Like Murray Rothbard, Kreitner notes that ratification of the Constitution was a veritable coup d’état against the American people. “Celebrated as the most profound debate in American history...the ratification struggle was hardly a fair fight. Throughout the contest, those who favored the Constitution resorted to deceit, censorship, and force. They suppressed critical pamphlets and accelerated votes to keep their predominantly rural opponents from scrutinizing the text....Ratification, though it occurred nearly two and a half centuries ago, remains the one time the Constitution was ever put to a vote. Even then, it barely squeaked to passage, and it did so thanks only to a scorched-earth campaign of violence, trickery, and threats.”

Despite these underhanded efforts, supporters of the new order gained only a limited result: “Though the Constitution itself was silent on secession, contemporaries clearly believed ratification could be withdrawn the same way it had been tendered: by popularly elected delegates voting at a statewide convention. No state would have joined the Union had its citizens not believed that such a right was necessarily implied.”

Indeed, the Constitution is best viewed as a “peace pact.” “I [Kreitner] have been influenced by ‘the unionist paradigm,’ which holds union to have been the central problem...of the American founding. Its urtext is David C. Henrickson’s Peace Pact: The Lost World of the American Founding...[it] suggests the Constitution is best considered a treaty among quasi-independent nations that prevented them from falling into a ghastly and brutal civil war. I only doubt, given that the war did come, how successful that diplomatic breakthrough really was.”

Kreitner ably shows that even zealous proponents of the Constitution sometimes abandoned their quest for national unity. “Ever since the Revolution, Gouverneur Morris had been a strong champion of national government, a close ally of Hamilton and Washington....Like most of his business-minded brethren, Morris saw ‘Mr. Madison’s War [of 1812] as hostile to Northern interests’....Morris preferred to break up the Union rather than surrender it to the South. ‘The Union, being the means of freedom, should be prized as such,’ he wrote in 1813 ‘but the end should not be sacrificed to the means.’ He thought Northerners should ‘examine the Question freely, whether it be...consistent with the Freedom of the Northern and Eastern States to continue in Union with the Owners of Slaves.’”

John Quincy Adams is rightly regarded as an ardent nationalist, but in 1839, “the former president had suggested to the New York Historical Society that it might someday be better for ‘the people of the disunited states, to part in friendship from each other, than to be held together by constraint.’”

The claim that the federal government exploits one section of the country to help others persisted, and it lay behind Southern opposition to Franklin Roosevelt’s New Deal. “In a 1937 book, Divided We Stand, Texas Historian Walter Prescott Webb attacked Roosevelt’s program as contributing to the massification of American life. Taking aim at everything from Wall Street finance to chain stores and industrial automation, Webb depicted Americans in the heartland as colonial subjects forced to pay tribute to coastal masters.”

The great anti-statist Albert Jay Nock emphasized another sort of sectional exploitation. “In a 1934 journal entry, Nock wrote that he had ‘asked several businessmen what actual good New England is getting out of membership in the Union, and they could not think of any, even though they tried hard. As for myself, I can think of none.’ Nock, however, was hardly a consistent advocate of Yankee nationalism: the only time he ever voted in a presidential election, he cast a write-in ballot for Jefferson Davis—on the principle, as he put it, that ‘if we can’t have a fine man who amounts to anything, by all means let’s have a first-class corpse.’ [!]”

One of the ways that states have endeavored to thwart the federal government is nullification of laws deemed unconstitutional. Kreitner, who throughout the book displays a pronounced anti-Southern bias, is sometimes unsympathetic to it, but he admits that it can be used to support freedom. Several of the Northern states nullified the Fugitive Slave Act of 1851, and on this occasion it was the Southern states that sought an increase in federal power. “A massive extension of federal power,...[it] preempted Northern states’ ‘personal-liberty laws,’ which granted accused runaways the right to a jury trial and other legal protections. For slavery’s sake, Southerners dropped all pretense of caring about state sovereignty and local control....Northerners were equally opportunistic in response. Once enthralled by Daniel Webster’s soaring odes to the glorious Union, many now took up the nullification doctrines he had denounced. After the fugitive-slave bill passed Congress, Northern states enacted even stronger personal-liberty laws, directly challenging the new statute. Vermont’s legislature extended the right of habeas corpus to accused runaways, essentially voiding the law in the state. Northern juries refused to convict citizens of disobeying the act. While a pro-Southern paper in Washington denounced the North’s embrace of ‘Nullification and Disunion,’ the poet John Greenleaf Whittier proudly called himself a ‘nullifier.’”

Kreitner concludes that secession is likely to grow in importance in our present dark times. “The twentyfirst century has seen an unmistakable resurgence of the idea of leaving or breaking up the United States—a kaleidoscopic array of separatist movements shaped by the conflicts and divisions of the past but manifested in new and potentially destabilizing ways. Earlier periods were defined by the ambitions of one or another region or the separatist impulses of this or that aggrieved minority. The new secessionism has appeared in multiple states at once, each pushing for departure from a Union that no longer functions. If the country as a whole is beyond saving, perhaps one’s own state is not.”

Those of us who wish to advance the ideas of Mises, Rothbard, and Ron Paul can take heart from this rich and detailed book.