Labor Unions and Freedom of Association 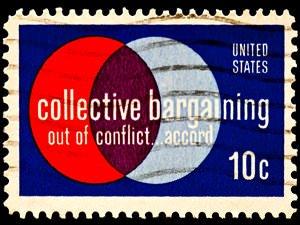 Mandatory union membership and mandatory dues imposed on those who do not want to join are again at issue. On the heels of contentious “right to work” disputes in several states, the Supreme Court has recently heard arguments challenging an Illinois mandate requiring home health care workers to pay representation fees to a union they did not want. That case, Harris v. Quinn, has the potential to even challenge the Court’s 1977 Aboud precedent upholding mandatory union dues for public sector workers. Such a result would be a victory for liberty.

Unions and their allies in Harris v. Quinn reiterate the claim, accepted in Aboud, that “union security” rules are needed to prevent workers from unfairly opting out of paying for union services. But that claim, which portrays the issue as defending the property, contract, and freedom of association rights of unions (to be paid for services rendered to workers they represent), intentionally misrepresents the core issue, which is the liberty of workers and employers.

“Union security” rules are clear violations of the liberty of workers’ and employers’ freedom to not be forced to associate with certain groups against their will, a freedom unions ironically steamroll in the name of freedom of association, asserted only for themselves, despite its inconsistency with freedom of association for all. Consequently, unions must find a legitimate sounding way of defending the coercion involved. That is where the free-rider argument comes in, which frames the issue as protecting legitimate rights, rather than the illegitimate use of government-granted coercive powers to impose employment terms violating government’s primary role: protecting individual rights.

Labor laws have made unions exclusive representatives for groups of workers. Therefore, unions assert that every worker must be forced to pay for his or her representation, or he or she will be able to “free ride” on those services. That is, workers’ rights must be abrogated to prevent non-members’ unethical behavior.

Given majority approval in a union certification election, current labor law interpretation requires all affected workers to submit to union representation and pay the union’s price for it. Those terms are imposed not only on workers who voted for the union, but for those who supported another union, those who preferred remaining union-free, and those who did not vote (including those hired after the union is certified, who never get an effective chance to vote). Workers (or the agents they select voluntarily) and employers are prohibited from negotiating their own arrangements, including labor-management cooperation not controlled by the union and “yellow-dog” agreements requiring abstention from union involvement (which, before labor laws eliminated such rights, the Supreme Court called “part of the constitutional rights of personal liberty and private property”).

The supposed “free-riding” workers are those who would refuse union representation, but are not allowed to. They are harmed by the imposition, revealed by their unwillingness to pay the “price” for those services. They are not free-riding on the union. They are “forced riders,” required to abide by, and pay for, violations of their rights and interests, to benefit unions. That violation of workers’ (and employers’) rights, not their attempts to escape the harm unwanted representation imposes on them, is the central issue.

Despite union rhetoric, they don’t really want to solve the “free rider” problem they hang their argument on, because it is easily fixable. But unions stop at nothing to prevent the solution. All a fix would require is ending mandatory exclusive union representation. If workers were allowed to choose representation by different unions or other agents or to negotiate for themselves, the problem would disappear. Each union would only negotiate for its voluntary members, eliminating so-called free riders. But unions have fought with tooth, nail, and their members’ wallets to impose and maintain exclusive representation, knowingly harming all dissenters and thereby creating the “free rider” problem. And their recent behavior, as in Michigan, reveals how far they will go to maintain that power to circumvent competition in the labor markets they control, now largely in the public sector.

Despite unions’ deceptive arguments for their government-granted exclusive, abusive powers in terms of freedom of association, real, general freedom of association does not invalidate the potential of workers forming unions. Scholars who are part of the Austrian School have been at the forefront of making that clear.

As Walter Block put it in “Labor Relations, Unions, and Collective Bargaining: A Political Economic Analysis,” “unionism ... admits of a voluntary and a coercive aspect. The philosophy of free enterprise is fully consistent with voluntary unionism, but is diametrically opposed to coercive unionism.” Voluntary unions are consistent with liberty because “if it is proper for one worker to quit his job, then all workers, together, have every right to do so, en masse.” And in his “The Yellow Dog Contract: Bring It Back!” he addressed this issue directly:

Are unions per se illegitimate? No. If all they do is threaten mass quits unless their demands are met, they should not be banned by law. But as a matter of fact, not a one of them limits itself in this manner. Instead, in addition, they threaten the person and property not only of the owner, but also of any workers who attempt to take up the wages and working conditions spurned by the union. They also favor labor legislation that compels the owner to deal with the union, when he wishes to ignore these workers and hire the “scabs” instead.

Ludwig von Mises, in his 1966 magnum opus, Human Action, also made the distinction between voluntary and coercive unions clear:

Requiring union representation and endowing those unions with monopoly powers violates the liberty and freedom of association of dissenting workers, employers, non-union workers, and consumers. Undoing that abuse would fix every union free-riding and forced-riding problem. And it would be easy to do. As Murray Rothbard put it, in his 1973 For a New Liberty, “All that is needed, both for libertarian principle and for a healthy economy, is to remove and abolish these special privileges.” That is why Harris v. Quinn, which offers the Court another chance to see through the “free-rider” smokescreen to the central issue, presents an opportunity for a reform that would benefit the vast majority of Americans.