GET NEWS AND ARTICLES IN YOUR INBOXPrint
A
A
Home | Mises Library | John Law: Proto-Keynesian 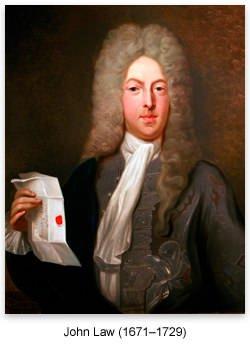 The prince of proto-Keynesian money cranks, both theorist and activist, was John Law of Lauriston (1671–1729). Son of James Law, a wealthy Scottish goldsmith and banker, John was born and grew up in Edinburgh, proceeding to squander his father's substantial inheritance on gambling and fast living. Convicted of killing a love rival in a duel in London in 1694, Law bribed his way out of prison and escaped to the Continent. After a decade in Europe pondering monetary problems, Law returned in 1703 to Scotland, where he was not subject to arrest. There, Law concentrated on developing and publishing his monetary theory cum scheme, which he presented to the Scottish Parliament in 1705, publishing the memorandum the same year in his famous or infamous tract, Money and Trade Considered, with a Proposal for Supplying the Nation with Money (1705). The Scottish Parliament considered but turned down his scheme; the following year, the advent of the union of Scotland with England forced Law to flee to the Continent once more, since he was still wanted by English law under the old murder charge.

Karl Marx, in a sense, should have been proud of the way John Law "unified theory and practice" in his proposal. On the one hand, Law was the theorist, arguing for a central land bank to issue inconvertible paper money, or rather, paper money "backed" mystically by the land of the nation. As a crucial part of his proposal, the grateful nation — in this case Scotland — was supposed to appoint Law himself, the expert and theoretician, in charge of putting this inflationist central bank scheme into effect.

John Law, as his subtitle states, proposed to "supply the nation" with a sufficiency of money. The increased money was supposed to vivify trade and increase employment and production — the "employment" motif providing a nice proto-Keynesian touch. Law stressed, in opposition to the Scholastic hard-money tradition, that money is a mere government creation, that it has no intrinsic value as a metal. Its only function is to be a medium of exchange, and not any store of value for the future.

Even more than William Potter, John Law assured the nation that the increased money supply and bank credit would not raise prices, especially under Law's own wise aegis. On the contrary, Law anticipated Irving Fisher and the monetarists by assuring that his paper money inflation would lead to "stability of value," presumably stability of the price of labor or the purchasing power of money.

Law also anticipated Adam Smith in the latter part of the 18th century in his fallacious justification for fractional-reserve banking, that it would provide a costless "highway in the air" — furnishing a money supply without spending resources on the mining of gold or silver. In the same way, of course, any expenditure of resource can be considered a "waste" if we supply our own assumptions that are not held by people on the free market. Thus, as Professor Walter Block has pointed out, if there were no crime, all expenditure on locks, fences, guards, alarm systems, etc., could be denounced as "wasted resources" by external observers criticizing these expenditures. Similarly, if there were no such thing as governmental inflation, market expenditure on gold or silver could be considered "wasteful" by observers.

If domestic price rises constitute the Achilles heel of monetary inflation, another worry has been the outflow of gold and silver from the country — in short, an "unfavorable balance of trade" or of "payment." But John Law dismissed this problem, too. On the contrary, he declared that an increase in the money supply would expand employment and output and "therefore" increase exports, thus causing a favorable balance of payment, with gold and silver flowing into the country. Note that there is no analysis of why an increase in the money supply should increase output or employment, let alone drag exports along with it, in this seemingly universal expansion.

"The cataclysm of John Law's experiment and his Mississippi bubble provided a warning lesson to all reflective writers and theorists on money throughout the 18th century."

Interestingly enough, one of Law's talking points about the need for more money was, as in the case of low interest, based on a striking misinterpretation of the reasons for the prosperity of the Dutch, whom all other nations envied in the 17th century. We have seen that everyone saw that the Dutch had low interest rates, leading English mercantilists to put the cart before the horse and attribute Dutch prosperity to low interest rates instead of realizing that high savings and higher standards of living had brought about these low interest rates. Hence the mercantilists suggested that England force the maximum usury rate still lower.

Similarly, John Law saw that prosperous Holland enjoyed a plenty of metallic money; he attributed the prosperity to the abundance of money, and proposed to supply paper money instead. Again, he overlooked the point that it was Dutch property and high production and export that brought a plenitude of coin into the country. The export surplus and abundant coin were reflections of Dutch prosperity, not its cause.1

Not that John Law neglected the low-interest argument for Dutch prosperity. But instead of direct usury laws, Law proposed to arrive at low interest rates in what would become the standard inflationist manner — expanding bank credit and bank money and thereby pushing down the rate of interest. Indeed, Law worked out a proto-Keynesian mechanism — increasing the quantity of money would lower interest rates, thereby expanding investment and capital accumulation and assuring general prosperity.

To Law, as to Potter before him and Keynes after him, the main enemy of his scheme was the menace of "hoarding," a practice that would defeat the purpose of greater spending; instead, lower spending would diminish trade and create unemployment. As in the case of the late 19th-century German money crank Silvio Gesell, Law proposed a statute that would prohibit the hoarding of money.2

It took John Law another decade to find a ruler of a country gullible enough to fall for his scheme. Law found his "mark" in the regent of France, a country that had been thrown into confusion and turmoil upon the death of its seemingly eternal ruler, Louis XIV, in 1715. The regent, the duke of Orléans, set up Law as head of the Banque Générale in 1716, a central bank with a grant of the monopoly of the issue of bank notes in France. Soon the banque became the Banque Royale. Originally, banque notes were receivable in French taxes and were redeemable in silver; soon, however, silver redeemability was ended. Quickly, by 1717, John Law had all monetary and financial power in the realm placed into his hands. To his old scheme he added the financing of the massive government debt. He was made the head of the new Mississippi Company, as well as director-general of French finances; the notes of the Mississippi Company were allegedly "backed" by the vast, undeveloped land that the French government owned in the Louisiana territory in North America. Law's bank created the notorious hyperinflationary "Mississippi bubble"; notes, bank credit, prices, and monetary values skyrocketed from 1717 to 1720.

One aristocratic observer in Paris noted that for the first time the world "millionaire" had become prevalent, as suddenly many people seemed to possess millions. Finally, in 1720, the bubble collapsed, and Law ended a pauper heavily in debt, forced once again to flee the country. As before, he roamed Europe, making a precarious living as a gambler, and trying to find another country that would adopt his scheme. He died in 1729, in Naples, trying to persuade the Neapolitan government to make him its inflationary central banker.3

The cataclysm of John Law's experiment and his Mississippi bubble provided a warning lesson to all reflective writers and theorists on money throughout the 18th century. As we shall see below, hard-money doctrines prevailed easily throughout the century, from Law's former partner and outwitter Richard Cantillon down to the Founding Fathers of the American Republic. But there were some who refused to learn any lessons from the Law failure, and whose outlook was heavily influenced by John Law.4