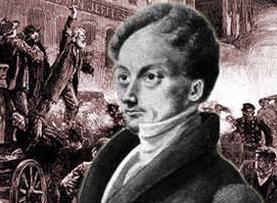 The theory of class conflict as a key to political history did not begin with Karl Marx. It began, as we shall see further below, with two leading French libertarians inspired by J.B. Say, Charles Comte (Say's son-in-law), and Charles Dunoyer, in the 1810s after the restoration of the Bourbon monarchy. In contrast to the later Marxist degeneration of class theory, the Comte-Dunoyer view held the inherent class struggle to focus on which classes managed to gain control of the state apparatus. The ruling class is whichever group has managed to seize state power; the ruled are those groups who are taxed and regulated by those in command. Class interest, then, is defined as a group's relation to the state. State rule, with its taxation and exercise of power, controls, and conferring of subsidies and privileges, is the instrument that creates conflicts between the rulers and the ruled. What we have, then, is a "two-class" theory of class conflict, based on whether a group rules or is ruled by the state. On the free market, on the other hand, there is no class conflict, but a harmony of interest between all individuals in society cooperating in and through production and exchange.

James Mill developed a similar theory in the 1820s and 1830s. It is not known whether he arrived at it independently or was influenced by the French libertarians; it is clear, however, that Mill's analysis was devoid of the rich applications to the history of western Europe that Comte, Dunoyer, and their young associate, the historian Augustin Thierry, had worked out. All government, Mill pointed out, was run by the ruling class, the few who dominated and exploited the ruled, the many. Since all groups tend to act for their selfish interests, he noted, it is absurd to expect the ruling clique to act altruistically for the "public good." Like everyone else, they will use their opportunities for their own gain, which means to loot the many, and to favor their own or allied special interests as against those of the public. Hence Mill's habitual use of the term "sinister" interests as against the good of the public. For Mill and the radicals, we should note, the public good meant specifically laissez-faire government confined to the minimal functions of police, defense and the administration of justice.

Hence Mill, the preeminent political theorist of the radicals, harked back to the libertarian Commonwealthmen of the 18th century in stressing the need always to treat government with suspicion and to provide checks to suppress state power. Mill agreed with Bentham that "If not deterred, a ruling elite would be predatory." The pursuit of sinister interests leads to endemic "corruption" in politics, to sinecures, bureaucratic "places" and subsidies. Mill lamented:

Think of the end [of government] as it really is, in its own nature. Think next of the facility of the means — justice, police, and security from foreign invaders. And then think of the oppression practised upon the people of England under the pretext of providing them.

Never has libertarian ruling-class theory been put more clearly or forcefully than in the words of Mill: there are two classes, Mill declared, "the first class, those who plunder, are the small number. They are the ruling Few. The second class, those who are plundered, are the great number. They are the subject Many." Or, as Professor Hamburger summed up Mill's position: "Politics was a struggle between two classes — the avaricious rulers and their intended victims."1

The great conundrum of government, concluded Mill, was how to eliminate this plunder: to take away the power "by which the class that plunder succeed in carrying on their vocation, has ever been the great problem of government."

The "subject Many" Mill accurately termed "the people," and it was probably Mill who inaugurated the type of analysis that pits "the people" as a ruled class in opposition to the "special interests." How, then, is the power of the ruling class to be curbed? Mill thought he saw the answer:

The people must appoint watchmen. Who are to watch the watchmen? The people themselves. There is no other resource; and without this ultimate safeguard, the ruling Few will be forever the scourge and oppression of the subject Many.

But how are the people themselves to be the watchmen? To this ancient problem Mill provided what is by now a standard answer in the Western world, but still not very satisfactory: by all the people electing representatives to do the watching.

Unlike the French libertarian analysts, James Mill was not interested in the history and development of state power; he was interested only in the here and now. And in the here and now of the England of his day, the ruling Few were the aristocracy, who ruled by means of a highly limited suffrage and controlled "rotten boroughs" picking representatives to Parliament. The English aristocracy was the ruling class; the government of England, Mill charged, was "an aristocratical engine, wielded by the aristocracy for their own benefit." Mill's son and ardent disciple (at that time), John Stuart, argued in a Millian manner in debating societies in London that England did not enjoy a "mixed government," since a great majority of the House of Lords was chosen by "200 families." These few aristocratic families "therefore possess absolute control over the government … and if a government controlled by 200 families is not an aristocracy, then such a thing as an aristocracy cannot be said to exist." And since such a government is controlled and run by a few, it is therefore "conducted wholly for the benefit of a few."

It is this analysis that led James Mill to place at the centre of his formidable political activity the attainment of radical democracy, the universal suffrage of the people in frequent elections by secret ballot. This was Mill's long-run goal, although he was willing to settle temporarily — in what the Marxists would later call a "transition demand" — for the Reform Bill of 1832, which greatly widened the suffrage to the middle class. To Mill, the extension of democracy was more important than laissez-faire, for to Mill the process of dethroning the aristocratic class was more fundamental, since laissez-faire was one of the happy consequences expected to flow from the replacement of aristocracy by the rule of all the people. (In the modern American context, Mill's position would aptly be called "right-wing populism.") Placing democracy as their central demand led the Millian radicals in the 1840s to stumble and lose political significance by refusing to ally themselves with the Anti-Corn Law League, despite their agreement with its free trade and laissez-faire. For the Millians felt that free trade was too much of a middle-class movement and detracted from an overriding concentration on democratic reform.

Granted that the people would displace aristocratic rule, did Mill have any reason for thinking that the people would then exert their will on behalf of laissez-faire? Yes, and here his reasoning was ingenious: while the ruling class had the fruits of their exploitative rule in common, the people were a different kind of class: their only interest in common was getting rid of the rule of special privilege. Apart from that, the mass of the people have no common class interest that they could ever actively pursue by means of the state. Furthermore, this interest in eliminating special privilege is the common interest of all, and is therefore the "public interest" as opposed to the special or sinister interests of the few. The interest of the people coincides with universal interest and with laissez-faire and liberty for all.

But how then explain that no one can claim that the masses have always championed laissez-faire? — and that the masses have all too often loyally supported the exploitative rule of the few? Clearly, because the people, in this complex field of government and public policy, have suffered from what the Marxists would later call "false consciousness," an ignorance of where their interests truly lie. It was then up to the intellectual vanguard, to Mill and his philosophic radicals, to educate and organize the masses so that their consciousness would become correct and they would then exert their irresistible strength to bring about their own democratic rule and install laissez-faire. Even if we can accept this general argument, the Millian radicals were unfortunately highly overoptimistic about the time span for such consciousness-raising, and political setbacks in the early 1840s led to their disillusionment in radical politics and to the rapid disintegration of the radical movement. Curiously enough, their leaders, such as John Stuart Mill and George and Harriet Grote, while proclaiming their weary abandonment of political action or political enthusiasm, in reality gravitated with astonishing rapidity toward the cozy Whig centre that they had formerly scorned. Their proclaimed loss of interest in politics was in reality a mask for loss of interest in radical politics.