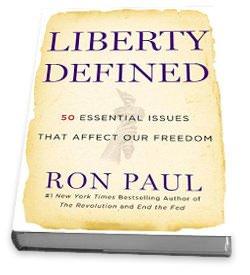 The worst effect of the state is intellectual. It puts our brains in a prison, simply by defining the terms in which we are permitted to think and speak. The one nonnegotiable point becomes the state itself. You are permitted to argue about what the state's priorities ought to be (bombs or butter), but not to question the fundamental model of a state-dominated society.

Believers in human liberty have played along with this game for too long. They've done this for decades. Sometimes they tack right and sometimes they tack left. What they should be doing is upending the game board itself. They need boldly to make that fundamental claim of the old liberal tradition, that society orders itself without the state. Liberty is the answer in every area of life.

This is precisely what Ron Paul does in his amazing book to be released April 19: Liberty Defined: 50 Essential Issues That Affect Our Freedom. It begins with the big themes about what liberty is and what it is not. It is not, for example, something that is created by "public policy." It is not a piece of legislation. It does not emerge from the political process. Precisely the opposite: liberty is the absence of all these things. It is what results in the absence of state interference. Liberty's only fundamental requirement is that the state let society alone to develop, grow, and prosper.

This point of view is hardly heard at all in the political debate today, which is otherwise hamstrung by partisan wrangling of what the state should be doing. By the time you finish the introduction to Ron Paul's book, you realize that you are going to be treated to a completely new and radical form of thinking about politics, one that reimagines the current world in the same way that Jefferson reimagined his world — and became the real father of this country.

What's especially brilliant about Ron's new book is that he doesn't just deal in abstractions. As the title suggests, he takes on 50 difficult areas of politics today and shines a new light of liberty on each of them. I think I'm correct in anticipating most readers' reaction: there will be wailing and gnashing of teeth. But the end effect will be that beautiful thing: enlightenment.

The book is arranged alphabetically, which makes the subject of abortion the very first entry. Where do you suppose Ron Paul stands on this issue? Let's just say that if you think you have followed the conventional debate, you are in for something completely different.

Ron is a vehement opponent of abortion, and he explains why in ways that will bring readers around to his perspective (which is that of a man who has delivered thousands of babies). Then he moves to the entirely different area of public policy, pointing out that a centralized edict on this subject runs contrary to every moral and practical dictate of human liberty. A centralized pro-life policy is as wrong as a centralized mandatory-legalization policy. He wants a repeal of Roe. He doesn't want state funding. But if a community wants to permit the practice, while he would certainly oppose that at the local level, his view is that the federal government should have nothing to say about it either way.

His position is shocking and out of the mainstream, to be sure, but it is also supremely practical. In innumerable communities around the country today, abortion clinics compete with alternative women's clinics to provide for those in need of pregnancy services. In fact, if you want to look where the pro-life movement has seen gains, it is not in the area of political organization but in providing a market service for those who are seeking an alternative to abortion. This is a case in point of how liberty serves to work out our core disagreements.

Now, this is only the first issue and there are 49 others that he deals with, and each with a perspective that is surprising, practical, moral, and balanced in a fascinating way. Unless you are seriously schooled in libertarian theory, you might find it difficult to anticipate what he will say. Even if you get the libertarian point of view, Ron's argument and evidence will surprise you.

Consider his writings on privacy, for example. He argues that it is a violation of human rights for the state to invade our privacy. At the same time, he argues that it is contrary to liberty for the state to restrict the right of private businesses to use cameras, websites to collect information on us, or businesses to investigate credit histories of their employees. As one application, he favors total drug legalization but defends the rights of business to drug test.

If anyone else in public life has taken this position — which Ron, as always, makes very persuasive and compelling in his narrative — I'm not aware of it.

So on it goes through so many issues. He opposes war with the passion of the Old Left. But he sounds like the Old Right on issues of taxes and regulations. His writings on terrorism mark him out as a real radical against the state's stupid policies (he says that terrorism is a result of US foreign policy). At the same time, he has no problem with private discrimination on any grounds: sex, race, disability, or whatever. On marriage, he upholds the traditional definition (man and woman before God) but favors free association: "Why not tolerate everybody's definition as long as neither side uses force to impose its views?"

He gets into sticky areas like the history of Zionism, and here again, I can promise you that you have never heard this point of view (he celebrates the original cultural movement but condemns the manner in which later political ambitions corrupted a great cause). On trade, he is at once a radical proponent of universal commercial rights and an opponent of legislated treaties like NAFTA. On gun control, he favors it for the government and opposes it for the individual.

Driving this book forward on page after page are the relentless surprises, the truth-telling logic, and the speak-from-the heart tone of the prose. You might agree with all, half, or none. But there is no way you will think about any of these issues in the same way after being schooled in the Paulian point of view.

This much is clear: there has never been a book like this to appear from any US political figure. It contains not a hint of political posturing or pandering. Its purpose is not to vault Ron to the top of a presidential ticket. The ambition of the book can be modestly described as educational, but the effect could be much more. This is the book we've needed to blow up the rhetorical structure of generations of political activism and replace it with a completely new vision of liberty.

This is why the book is called Liberty Defined. When you are lost and confused about a subject, the right way forward is to begin by defining your terms. At last, one man has done just this. He has defined liberty. And then he has done more: he has shown us that liberty is right, liberty works, liberty is the only way forward.

With this marvelous and passionate book, Ron Paul has really made a mark in the literary history of our times. It is a book of courage, intelligence, and vision. It should become our credo. Ron could be the founding father of a new and free America and world.