It Started with Plato 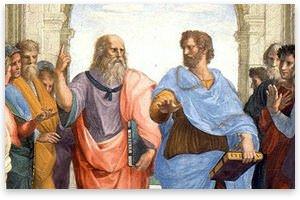 Our modern civilization is ravaged not only by the aftermaths of a global war but by a political controversy. This latter concerns the proper functions of government — a subject of crucial importance to human welfare. No other national problem has ever produced so deep and unbridgeable a cleavage in public opinion.

The issue is, to use a sporting metaphor, whether in the game of life the government shall captain the national team or shall act as referee. That is to say, whether the government shall take the principal part in the activities of the community and control with plenary powers the movements and welfare of the members, or whether it shall stand apart from the struggle, arbitrating upon its issues, guaranteeing fair play to all, and insuring that the rules of the game shall be faithfully carried out.

To be more specific, whether the government shall take upon itself the power and functions of the old-time slave owner, or shall leave the community free to sort themselves out into employer and employed, while the government acts as the judge, ready in the community interest to use its influence and authority against the wrongdoer.

Many people believe that this issue arose with the advent of socialism a century or so ago and was given its impetus and virulence by the communist class war dogma of Karl Marx. That is not so.

The controversy is almost as old as civilization. It began in ancient Greece, almost four hundred years before the Christian era, with the doctrines of Plato. He was the first of the "planners" and the true founder of the communist economy which deifies the state. In his Republic the Athenian philosopher set out a virtual blueprint for the evolution of what has come to be called the "Welfare State."

Plato's ideal republic was founded upon two primary assumptions: (1) that the community must be comprised of only two classes, those who govern and those who are governed (the latter owing implicit obedience to the former), and (2) that human qualities are mainly hereditary and therefore that rulers must beget future rulers. (It should be noted that Plato belonged by birth to the aristocratic governing class who hated the democracy no less than the principles upon which the democratic system is founded.)

The ancient philosopher's proposals followed logically from these assumptions. They were simple, albeit sensational. He advocated the procreation of a privileged governing class — a sort of brain trust — to be produced by a system of selective breeding which approximates stud farming and the rearing of pedigreed prize stock. The "wise men" so born and trained would be the backbone of the state administration.

To secure a virile race and to keep the population within predetermined limits, Plato counseled the segregation of the sexes, state-arranged cohabitation, communism in wives, and the state ownership of children. From birth onward children would be reared in public nurseries where mothers would have to feed whatever child the state officials directed, to assure that no mother would be able to identify her own child, and no child would know its own parents.[1]

To secure maximum economic progress, Plato advocated the specialization of labor under state administration. Each person would be given work according to, and commensurate with, his proven abilities. The choice of work would, however, not be the individual's own: it would be decided by the "wise men." Rewards in prestige, property in trust, and material assets generally would be determined by the rulers following the individual's needs — these being fixed according to his preordained status in the regime. To give effect to these proposals the philosopher argued logically that property must be held by the state, that is to say, there must be overall "nationalization" of production, including labor as well as materials and finance.

This epoch-making conception of the state control of all human activities was the inspiration of all subsequent "welfare" schemes. It was the philosophy upon which Sir Thomas More evolved his fantasy Utopia; it was the basis of Bacon's economic system as set out in his The New Atlantis. It was the prime source of the socialist nationalization doctrine and the foundation of the class war dogma of Karl Marx, which was merely Platonism in reverse, with the revolutionaries as rulers.

Moreover, it was the fount from which both Hitler and Mussolini imbibed their system of totalitarian planning — although those dictators may conceivably have been unaware of their indebtedness to the old Platonic philosophy. The methods differ but the final objective is always the same: state planning and control of all human activities from the cradle to the grave.

None of these schemes has ever won universal acceptance because each embodies ideas that are contrary to some of the deepest concepts of human intercourse. Moreover, all such proposals constitute a frontal attack upon private initiative. They can be brought into practical shape only by an intolerable intervention of compulsion. Such state control of activities is the antithesis of the democratic ideal which assumes that the individual shall be the arbiter and architect of his own career, and be thus free to organize his life and that of his family in any manner which suits his needs.

If I read aright the implications of modern events, particularly in view of the aggressive developments of Soviet Russia, this issue between individual responsibility and state direction of human effort is the main one before the world today. Ideas concerning it seem to be in a chronic state of confusion.

Let us therefore be clear about the full meaning of these opposing ideologies. Now, the democratic system makes the state the servant of man; the socialist system makes man the servant of the State. One preserves the liberty and independent action of the individual; the other annihilates it. One allows the myriads of transactions which make up the national life to be the respective affairs of the individuals who compose the nation; the other makes them into a vast monopoly over which no one has any jurisdiction except the head of the state and the officials he appoints and controls.

In the one, man is free; in the other he is a prisoner of the regime. These ideologies are irreconcilable. A prisoner has no real freedom. An animal in a zoo is a captive. His compound may be large and his surroundings may simulate his natural conditions. But for all that he is a prisoner. He cannot seek his own destiny. He is not free to lead the life for which he was created.

Now, in these days nearly all peoples, even in the so-called democracies, live in a sort of national zoo. They are captives of a state planned economy. Their "compound" is their country. They cannot leave it except under financial conditions which compel their speedy return. They are rationed and regulated and have to endure the restrictions which the authorities impose, since the alternative is to starve.

Nobody objects to that state of affairs in time of national emergency and peril, but it is one thing to submit voluntarily to captivity during a grave crisis and quite another to be forced to endure it forever. All these restrictions have arisen since the outbreak of the First World War. The choice at base, therefore, is whether the world shall go back to the principle of freedom (not necessarily the conditions) of pre-1914, which unhappily no one under forty years of age remembers, or on to closer confinement in captivity as the socialistic system develops.

The two systems have nothing in common. They cannot co-exist since no one can be a prisoner and a free man at the same time. Attempts have been made to combine the individual freedom of a democratic society with state direction in a "socialist planned economy," but they have failed. Like fire and water they cannot be united. As soon as they come into mutual contact the qualities of both are destroyed.

That being so, we have to weigh the pros and cons of each of these radically different ideologies and decide under which we prefer to live. Having made our choice we must, so far as is humanly possible, free the system we prefer from its inherent disadvantages and probable abuses. To that course there is no alternative unless it be anarchy and chaos.

This article was originally published as "It Started with Plato" in The Freeman, August 13, 1951.

S. Harcourt-Rivington as a British economist and regular contributor to the Daily Mail and other London publications, and also to French and South American journals. His books include The Evolution of Industry and The Great Menace, an exposition of the evils of collectivist regimes.