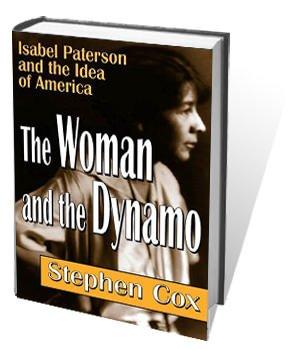 [The Woman and the Dynamo: Isabel Paterson and the Idea of America • Stephen D. Cox • Transaction Publishers, 2004 • 418 pages]

This year's release of the movie version of Atlas Shrugged — or at least a third of a shrug — has put Ayn Rand back in the spotlight. The man with the big-budget plan, Rep. Paul Ryan, is said to require that his staff read Rand. There's even a Senator named Rand — although he wasn't named for Rand, he's a Rand fan. There's so much Rand buzz that the Christian Right is now attacking Rand for her atheism.

Many mainstream Rand fans overlook her atheism while being wild for her moral support of capitalism. Rand studied history and philosophy in Russia, but she didn't read widely. Just who was it that provided Rand the education in the glories of free markets that most people identify her with?

"They'd sit up until four or five in the morning — and Ayn would be sitting at the master's feet," Rand's niece remembers.

One night, when they were talking, I went to bed, but I could hear the conversation, and it was if Pat were the guru and teacher — and Ayn didn't do that. Ayn would be asking questions, and Pat would be answering. It was very strange.

Isabel Paterson is the "Pat" Mimi Sutton was referring to — a "radical individualist in both theory and practice," explains Stephen Cox in his extraordinary The Woman and the Dynamo: Isabel Paterson and the Idea of America.

Paterson's The God of the Machine was one of four magisterial libertarian works to be published in the dark days of 1943. Although her book was more well-known than Albert Jay Nock's Memoirs of a Superfluous Man, which was released that year, Rose Wilder Lane's The Discovery of Freedom, and especially Rand's The Fountainhead were much more popular.

In the first third of The Fountainhead, economic ideas do not dominate. It was only in the remainder of Rand's first great success that, "after many months of intense discussions with Paterson about political philosophy and American history and institutions, does she develop the political meaning of Roark's experience," Cox explains.

Lane, like Rand, had the benefit of picking Paterson's brain, and Cox writes, "It is possible that Lane derived many of her key concepts from her all-night conversations with Paterson."

However, Discovery and God of the Machine are very different books, as Cox points out: "Libertarian readers have generally turned to Lane for emotional satisfaction and to Paterson for intellectual challenge."

The libertarian world of the 1930s, 1940s, and 1950s (referred to as the Old Right by Murray Rothbard) was a small one. So it's no surprise that the lives of these giants were intertwined. Although Dynamo is ostensibly about Paterson, readers are treated to a look into the lives of all the major libertarian figures of that time. Cox spends a chapter and then some focusing on the work of Lewis Douglas, who was influenced by his "Andrew Jackson Democrat" father "Rattlesnake Jimmy" Douglas; H.L. Mencken, who "was as courteous to people of all kinds as Paterson was forthrightly rude"; Garet Garrett, "a man of strange and unaccountable intellectual perturbations"; Albert Jay Nock, who "was so obsessively secretive that, rumor had it, staff members of the first Freeman could reach him only by putting messages under a certain rock in Central Park"; and of course Rand and Lane, as well as novelists Willa Cather and Gertrude Stein.

"Just who was it that provided Rand the education in the glories of free markets?"

Paterson made her living as a novelist and columnist. However, while her column in the New York Herald Tribune was "Turns With a Bookworm," she was given the latitude to write about most anything she wanted, which turned out to be economics, politics, and whatever else came to her mind.

Her favorite Depression book was Garrett's The Bubble that Broke the World, and she understood the Austrian view that the Depression was a curing of the boom created by the government's cheap money, and that the hard times continued because of government price supports and programs that hampered the liquidation of what Austrians would call malinvestments.

She railed against FDR's gold seizure from a woman's point of view:

Never shall we forget the line of women we saw turning in their savings, under threat of ten years in jail and ten thousand dollars fine, while the multimillionaire Senator Couzens stood up bravely on the floor of the Senate and promised to "hunt them down" if they tried to hold out a few dollars

Paterson was not just adventurous with her words — calling Eleanor Roosevelt "a pathetic fool" for instance — but the first time she flew, November 5, 1912, she set a record for reaching an altitude of 5,000 feet, flying higher than any woman had to that point. The 26-year old Canadian frontier girl sat beside pilot Harry Bingham Brown in the tiny Wright biplane, constructed of cloth and wood and said afterward, "It was the greatest experience of my life."

In Utah, she attended school but a month before asking to leave. She knew more than the teacher and at seven years old she was already reading "a consideration of Bryan's stand on the free silver question." So readings the teacher offered, like the Little Red Hen, provided no stimulation.

The Bowler (Isabel's maiden name) family traveled throughout the West and times were hard. She left home at 18 and began a series of jobs — so many she lost count. She married Kenneth Paterson, but left him within weeks. As to why she married him, no one knows. These experiences provided the fodder for her novels.

Paterson's novels to varying degrees were autobiographical, and Cox artfully constructs Paterson's early years while providing summaries of her novels and the characters. After leaving her husband, she immediately found a writing career, by accident. Starting as the boss's secretary at a Spokane newspaper, within two weeks she was writing editorials.

Paterson was a much stronger brew than today's faux freedom-fighting tea party, but they would be happy to know she sided with them on the God question and spent many hours arguing with Rand on religion.

In the end, Rand and Paterson parted company over the issue. Their last phone conversation, in 1959, prompted Paterson to write to a friend,

Talking to her, I realized how impossible it has become to communicate with her at all. … It's the darnedest thing, but professed atheists (one of whom she is which) are really more bigoted than any adherents of any religion, except perhaps Whirling Dervishes.

Paterson viewed men as dreamers, always looking to run off, change jobs, change the world, or conduct social experiments. While men are engaged in fanciful thinking and abstractions, women are more practical, getting down to work and raising families. "And on the personal level," writes Cox, "that is what the libertarian philosophy comes down to."

Anyone in the freedom movement owes a debt to Isabel Paterson. She was brilliant, productive, tenacious, and complicated. Professor Cox's work is worthy of his subject.