GET NEWS AND ARTICLES IN YOUR INBOXPrint
A
A
Home | Mises Library | Is Insider Trading Really a Crime?

Is Insider Trading Really a Crime? 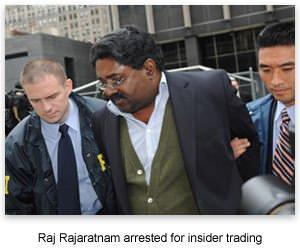 05/16/2011Robert P. Murphy
A major piece of financial news last week was billionaire Raj Rajaratnam's conviction on 14 counts of securities fraud and conspiracy. Rajaratnam, founder of the hedge fund Galleon Group, was worth an estimated $1.8 billion in 2009. His conviction has pleased those who want the feds to crack down on "insider trading" and show the fat cats on Wall Street that they aren't above the rules.

Although the public generally loves the fall of a ruthless and greedy financial titan — this, of course, is what made Oliver Stone's original Wall Street such a hit — economists have argued for decades that the practice of "insider trading" can actually be beneficial. In practice, the government can use the amorphous "crime" to go after any successful trader it wants. In a free society, there would be no such thing as laws against so-called insider trading.

The Facts of the Case

To argue that "insider trading" is a bogus offense, and that laws against it only give the government the power to interfere with economically beneficial activity, is not to suggest that Rajaratnam was an innocent babe in the woods. Indeed, some of the episodes being used to shock the general public would probably also be criminal in a genuinely free market.

For example, in 2008, Rajat Gupta, a board member at Goldman Sachs, apparently told Rajaratnam that Warren Buffet was about to invest $5 billion in Goldman. Rajaratnam bought millions of dollars worth of the stock before the market closed, and then he profited handsomely when the news broke and the stock jumped the next day. Later in the year, after a board meeting, Gupta apparently told Rajaratnam that Goldman would report earnings well below expectations. Rajaratnam dumped the stock, getting out before the earnings news became public and pushed down Goldman's share price.

Now this type of activity — let alone the breaking and entering that Charlie Sheen's character performed for Gordon Gekko in the movie Wall Street — would probably be criminal even in a purely laissez-faire world. Specifically, when the shareholders of a corporation appointed board members, they would presumably have standard confidentiality clauses in the contracts prohibiting this type of behavior. The same thing would hold for a law firm; it's not good business if clients know that their lawyers can phone tips to their buddies on Wall Street while working on a sensitive case, and so a major law firm would insist that its employees sign contracts prohibiting such things.

To understand the social benefits of insider trading, we have to first realize that stock prices mean something. They reflect real facts about the world, such as the assets and liabilities of a particular corporation and how effectively its current management is using resources to satisfy customers.

If a computer glitch suddenly swapped the prices randomly on all corporate stocks, the result would be disastrous, and it would affect "Main Street" as much as Wall Street. For an exaggerated example, if the share price of Microsoft fell from its current level of around $25 down to $1, a "corporate raider" might find it very profitable to borrow money, buy a controlling share in the company, and sell off all company assets to the highest bidders. The high price of $25 per share fends off such efforts to break up the successful company. The assets currently owned by the Microsoft Corporation are best deployed by Microsoft, rather than being integrated into different organizations around the world.

In general, speculators perform a useful social service when they are profitable. By buying low and selling high (or by short-selling high and covering low), stock speculators actually speed up price adjustments and make stock prices less volatile than they otherwise would be.

In this context, we can see the absurdity of the general view of "insider trading." There is a whole literature on the economic analysis of the subject, and economist Alex Padilla's 2003 dissertation defended the practice from a specifically Austrian angle. In a nutshell, insider trading is beneficial because it moves market prices closer to where they ought to be. Those profiting from "inside knowledge" actually share that knowledge with the rest of the world through their buying and selling.

Insider Trading: Who Is the Victim?

Above, we acknowledged the fact that obtaining information in illegal ways obviously had actual victims. But the mystique behind "insider trading" suggests that somehow if a person financially profits from special knowledge, that he or she is bilking the general public.

In general, this analysis doesn't hold up, as Murray Rothbard has pointed out. For example, suppose a Wall Street trader is at the bar and overhears an executive on his cell phone discussing some good news for the Acme Corporation. The trader then rushes to buy 1,000 shares of the stock, which is currently selling for $10. When the news becomes public, the stock jumps to $15, and the trader closes out his position for a handsome gain of $5,000. Who is the supposed victim in all of this? From whom was this $5,000 profit taken?

"In a free society, there would be no such thing as laws against so-called insider trading."

The $5,000 wasn't taken from the people who sold the shares to the trader. They were trying to sell anyway, and would have sold it to somebody else had the trader not entered the market. In fact, by snatching the 1,000 shares at the current price of $10, the trader's demand may have held the price higher than it otherwise would have been. In other words, had the trader not entered the market, the people trying to sell 1,000 shares may have had to settle for, say, $9.75 per share rather than the $10.00 they actually received. So we see that the people dumping their stock either were not hurt or actually benefited from the action of the trader.

The people who held the stock beforehand, and retained it throughout the trader's speculative activities, were not directly affected either. Once the news became public, the stock went to its new level. Their wealth wasn't influenced by the inside trader.

In fact, the only people who demonstrably lost out were those who were trying to buy shares of the stock just when the trader did so, before the news became public. By entering the market and acquiring 1,000 shares (temporarily), the trader either reduced the number of Acme shares other potential buyers acquired, or he forced them to pay a higher price than they otherwise would have. When the news then hit and the share prices jumped, this meant that this select group (who also acquired new shares of Acme in the short interval in question) made less total profit than they otherwise would have.

Once we cast things in this light, it's not so obvious that our trader has committed a horrible deed. He didn't bilk "the public"; he merely used his superior knowledge to wrest some of the potential gains that otherwise would have accrued as dumb luck to a small group of other investors.

To repeat, stock-market speculation is not a zero-sum activity. Even though we can look at any particular transaction and tally up the "winners" and "losers," the presence of speculators enhances the overall functioning of the stock market. For example, the market for any particular security is more liquid when there are rich speculators who will quickly pounce on a perceived mistake in pricing. If an institutional investor (such as a firm managing pensions) suddenly has a cash crunch and needs to dump its holdings, speculators will swoop in and put a floor under the fire-sale price. This is good for the beleaguered pension fund, and for the stock market in general.

Laws against Insider Trading Give the Government Arbitrary Power

Crackdowns on insider trading are harmful because they chill the cultivation of superior knowledge and speculative correction of market prices. Beyond this loss of general economic efficiency, insider-trading laws are insidious because of the arbitrary power they give to government officials.

In the specific case of Rajaratnam, prosecutors for the first time relied extensively on wiretaps to prove their allegations of insider trading. Legal experts predict that the government will expand its eavesdropping on the financial community in light of this courtroom "success."

More generally, Murray Rothbard argued that every firm on Wall Street is technically engaging in "insider trading." If they literally relied only on information that was available to the public, how could they make any money? Thus, the government has the statutory authority to harass or even shut down anybody in the financial sector who doesn't play ball. In Making Economic Sense, Rothbard declared,

There is another critical aspect to the current Reign of Terror over Wall Street. Freedom of speech, and the right of privacy, particularly cherished possessions of man, have disappeared. Wall Streeters are literally afraid to talk to one another, because muttering over a martini that "Hey, Jim, it looks like XYZ will merge," or even, "Arbus is coming out soon with a hot new product," might well mean indictment, heavy fines, and jail terms. And where are the intrepid guardians of the First Amendment in all this?

But of course, it is literally impossible to stamp out insider trading, or Wall Streeters talking to another, just as even the Soviet Union, with all its awesome powers of enforcement, has been unable to stamp out dissent or "black (free) market" currency trading. But what the outlawry of insider trading (or of "currency smuggling," the latest investment banker offense to be indicted) does is to give the federal government a hunting license to go after any person or firm who may be out of power in the financial-political struggles among our power elites. (Just as outlawing food would give a hunting license to get after people out of power who are caught eating.) It is surely no accident that the indictments have been centered in groups of investment bankers who are now out of power.

To drive home just how arbitrary and non-criminal "insider trading" really is, consider this scenario: Suppose someone had been planning on buying shares of Acme, but just before doing so, he caught wind of a bad earnings report. In light of the new information (which was not yet public), the person refrained from his intended purchase. Should this person be prosecuted for insider non-trading?

Raj Rajaratnam and (even more likely) some of his collaborators may indeed have violated genuine contractual obligations and fiduciary duties to their clients. To the extent that is true, some of their activity might have been illegal even in a truly free-market society.

In general, however, the practice of "insider trading" would not be a criminal offense, because it is impossible to define the concept in a way that wouldn't bar legitimate speculative research and trading. In practice, these laws give the government a very blunt club with which to knock down any profitable firm it wishes.