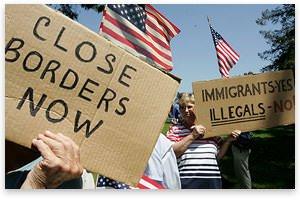 Conservatives love to champion the free market. They often are quick to defend businesses from increased regulation and taxation, and generally oppose intervention in the market place. However, in the case of undocumented workers, these free-marketeers suddenly become ardent supporters of central economic planning.

In this case they condemn those who hire "illegals," call for shutting down their businesses, imposing heavy fines, and other draconian measures. This exchange at a recent GOP debate demonstrates the prevailing attitude among those on the right regarding the issue.

The first contention is that illegal immigrants are breaking the law. They argue that we can't have people circumventing the system because it undermines the rule of law. But laws are legitimate only when they protect the natural rights of others. Anything else is simply malum prohibitum, a state contrivance that is grounded solely in exerting control over nonviolent behavior. In a free society, individual property owners would decide who was allowed in and who was not.

The second argument that conservatives present against so-called illegal immigrants concerns unemployment. The perennial claim is that if they weren't "taking our jobs" then hard-working Americans could go back to work. This is wrong for two reasons. The first, and most important, is that a job cannot be stolen. The employer owns the position, and only he or she may decide who will fill it. The second problem with this view is that it fails to explain unemployed skilled workers; most "illegal" immigrants contribute unskilled labor.

The only significant impact that immigrants have on the labor market is to increase the supply of labor, which tends to put downward pressure on wages. Everything else equal, the only way an immigrant will be hired over a native worker is if he is willing to accept lower wages. In order to maximize profits, business owners look to pay the lowest wage possible without affecting marginal productivity. If an immigrant is willing to work for less, and he is productive enough, it only makes sense to choose the lower-cost labor. Billions of people the world over make this same decision on a daily basis while shopping for goods and services — it's called bargain hunting. 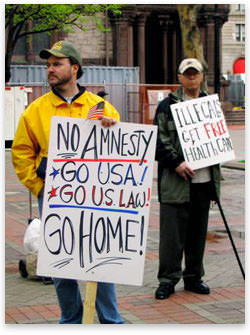 When owner and employee enter into an agreement, they are simply engaging in voluntary exchange. This is how the market would function absent state coercion. It is merely humans acting on two of the most basic desires: economic survival and improving one's condition. Neither has violated the natural rights of any other person, so no real crime has been committed, and they haven't caused unemployment.

Government intervention in the labor market leads to unemployment, and this includes restrictions on who may be allowed to work in the United States. "Getting tough" on illegal immigration would undoubtedly make us all worse off. The unemployment rate would rise, real wages would fall due to a decrease in productivity, and an overall lowering of living standards would be realized. We're already witnessing the effects of legislation targeting illegal immigrants. It was recently reported that, thanks to a law passed in April, Georgia farmers had to leave $75 million of produce to rot in their fields because of labor shortages. Firms that laid off undocumented workers for fear of losing their businesses could hire documented workers but would not likely be able to replace everyone. Otherwise it stands to reason that they would have done so in the first place, and stayed within the boundaries of the law.

It's unclear what the exact ratio would be, but assuming that in some industries three illegal immigrants can be hired in place of two legal citizens, when the former are laid off to accommodate the latter, we see that previously there were two unemployed workers, but now there are three. Where the firm once had the productive capacity of three laborers, it now has that of two. Forcing companies to fire employees on the basis of their immigration status hardly seems an effective way to lower unemployment rates or increase real wealth.

Perhaps the only reasonable claim that conservatives make is that they've been paying into the system their whole lives, and it's unjust for immigrants to come here illegally and collect welfare. But this is not an issue of immigration policy; it is a problem of government welfare policy. In a free society, individuals would pay directly for the things they needed, and the problem of free riding would disappear.

One effect of displacing immigrant workers already in the country is that an increase in actual crimes is likely to occur, as Stefano R. Mugnaini explains. These individuals are not likely to repatriate immediately, given the costs. Many are likely to turn to the underground market, resorting to actual crime (malum in se) in order to survive. Again, we see that further intervention is likely only to cause more problems.

Many have misdirected their anger toward illegal immigrants or the businesses that hire them. Instead, this outrage should be aimed where it truly belongs — with the state. Rather than insist on further interventions with a national ID card or E-verify, conservatives should demand a reduction in the government's role. Alexis de Tocqueville made a keen observation when he said "Americans are so enamored of equality that they would rather be equal in slavery than unequal in freedom." It is time for Americans to realize more of the same — that is, more slavery — cannot possibly bring about more prosperity.

It's clear the current problems can be directly traced to the state's interference in the market. If employer and employee were left free to negotiate contracts without government intervention, everyone would truly have an equal opportunity at business, and the highest quality at the best price would surely result. This economic freedom is at the heart of a free society, and only when the market is divorced from the state will its full potential be realized.

Joel Poindexter is a financial analyst who holds a bachelor's degree in economics and finance from Rockhurst University. He is a graduate of Mises University and his writing has been published at LewRockwell.com, Antiwar.com, and the Tenth Amendment Center.