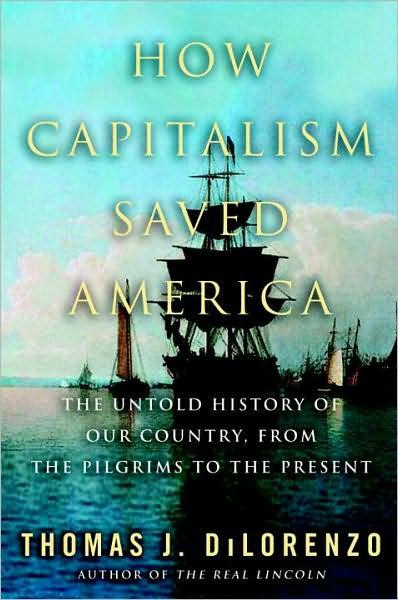 Thomas DiLorenzo has a marvelous analytical talent and a knack for drawing the reader's attention to the material that matters. His new book employs this talent in defense of the whole history of free enterprise in America. How long have we waited for a book like this? A very long time.

It is called How Capitalism Saved America: The Untold History of Our Country, From the Pilgrims to the Present. It seems like just the right book to give a market skeptic. "You have doubts about capitalism? Read this." After years of interacting with students in an urban business-school environment, DiLorenzo knows precisely what are the main points of contention.

The chapters are short but precise and careful in choosing the right episodes to highlight and arguments to present to make his case. His main points come mostly from the Austrian tradition: the classic texts by Mises, Hayek, Rothbard, Reisman, but also the public choice school, and also the best economic historians of our time. He begins with a definition and sweeping defense of capitalism, along with an eye-opening illustration of why such a defense in necessary, citing an egregious history of intellectual defenses of communism. Who remembers that John Dewey called Soviet communism "intrinsically religious" with the "moving spirit and force of primitive Christianity"?

The text never slows, as he marches through the history of the pilgrims, the American Revolution, the 19th century debate over internal improvements, the advancement of workers amidst capitalist advance, the myths of the Robber Barrons, the great depression, the New Deal, the energy crisis, and the modern debate on the environment, social regulation, and the war on vice. This whole book is a kind of guerilla manual for beating back the most common economic myths one is likely to encounter on campus or in public debate. Master this book and you have overcome most of the bad economic thinking of our time.

Thomas DiLorenzo is a former professor of economics at Loyola University Maryland and a member...

Tom DiLorenzo: What Socialism Really Is

Jeff Deist and Tom DiLorenzo discuss PC cancer that is spreading across campuses and universities in America.