How to Avoid Another Depression 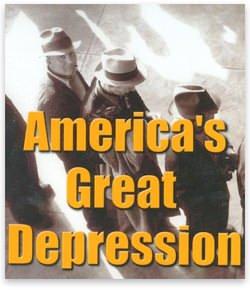 "Great Depression" is a strong term, but what exactly does it mean? Depressions are a normal part of a business cycle that are now often called recessions, downturns, or corrections. They occur in any economy where the financial markets are based on fractional-reserve banking.

Depressions only become "great" when normal to severe depressions are used as excuses for massive increases in government intervention. Murray Rothbard's America's Great Depression clearly demonstrates this phenomenon. The three great depressions in the history of the United States are the Progressive Era (1907–1922), the Great Depression (1929–1945), and the Great Stagflation (1970–1982).

The year 2008 marks the beginning of the next recession, correction, or depression. All the statistical indicators are pointing in that direction. All market indicators point in that direction as well. Ask any noneconomist and you will get that same answer. We only have to wait for the folks at the National Bureau of Economic Research to officially confirm what we already know.

Homebuilder stocks peaked in mid-2005 and it's been like watching a train wreck in slow motion ever since. When the overall stock market peaked one year ago we could finally celebrate the beginning of the correction phase of the business cycle even though most of us suspected it would be a severe one. Several mortgage dealers went bankrupt in 2007 and the increased number of foreclosures signaled that the correction was finally under way.

By late 2007 there were definite signs of major corrective forces acting in financial markets. However, whenever such corrections seemed to be ready to take place they were circumvented by government intervention. On December 12, 2007, the Fed announced the Term Auction Facility which would auction reserves at the Discount Window for a "broader range of counterparties" and against a "broader range of collateral" than open-market operations and without identifying the borrowers. This was the first extraordinary intervention.

Then in March, Paulson and Bernanke orchestrated the weekend purchase of Bear Sterns by J.P. Morgan, providing Morgan with a $30 billion, ten-year loan. This certainly was an extraordinary intervention. It also helped set a pattern of intervention that sends exactly the wrong signals to the market. Government officials at the Fed, Treasury, and elsewhere have been telling us that everything is fine in the economy and then, when bad economic news is announced, they claim that "it's not as bad as we anticipated." Then, when markets react to this misinformation, government comes in with some massive bailout in the form of a brand new, extraordinary intervention.

In July, Secretary Paulson told Congress that he saw no need for additional legislation to address problems at Fannie and Freddie and then, less than one week later, he announced that the Treasury would "backstop" the two megamortgage lenders. This essentially reversed what Treasury secretaries have been saying for decades, that they do not stand behind or guarantee the securities and debts and obligations of these government-sponsored entities.

Now an even more radical step by the Treasury has essentially nationalized Fannie and Freddie. Of course this does not help troubled homeowners or prospective buyers. It does not help homebuilders. Essentially, it hurts all those people because it puts them as taxpayers at risk for several trillion dollars in potential losses.

Most commentators think this takeover of Fannie and Freddie was the right thing to do: unfortunate, but necessary to prevent a financial crisis. This is all wrongheaded. It might delay a financial crisis, but it only makes the overall economic crisis even worse. History has well demonstrated that government intervention only lengthens the economic crisis and increases its overall cost. Just ask the Japanese about their experience.

In the absence of all these government interventions, it is likely that the corrective phase of the business cycle would already be over and we would be in recovery mode. To be sure, housing would remain in a slump for some time to come, but restorative market forces would already be at work creating the next generation of companies and jobs.

If we want to avoid the next great depression, all such government interventions should cease. The Treasury Department should revise their recent action and turn their proposed conservatorship of Fannie and Freddie into a bankruptcy receivership that would ultimately liquidate the corporation and their liabilities. Meanwhile the Fed should announce its intent to stop Term Auction Facilities and close the discount window to all but its traditional customers. To reduce the negative impact of the recession, government should cease foreign hostilities, reduce military spending, balance the budget, and cut taxes and regulations.