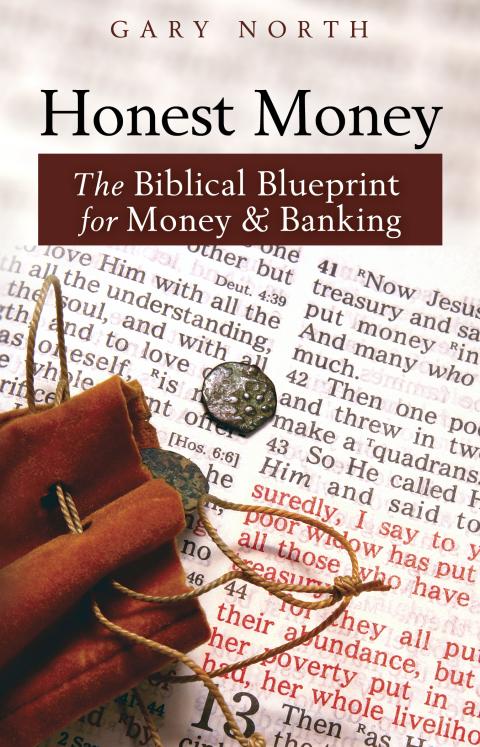 Lots of people are harassed routinely by ministers and other believers who imagine that the Bible favors inflationary schemes, bans the paying and receiving of interest, and requires a government monopoly on money to fund glorious government projects to help people. This book by Gary North answers those views with chapter, verse, and an impressive account of the historical context for the Bible’s teachings on money, banking, commerce, and trade.

Who knew that the Bible had so much to say about the issues of money and banking? The issue is a serious one because of the important history here and also because the Bible is such a foundational part of public understanding of every issue of public life and morality.

You can search the libraries for weeks and not find a guide as good as Gary North's detailed account of every mention of money and banking in both the Hebrew and Christian Scriptures.

What he finds underscores what the hard-money tradition has long said. Governments engage in evil when they change the definition of money. Inflation is a danger to the individual and society. Governments that monopolize the monetary system are abusing their power. Governments cannot be trusted with money. That's the lesson.

The first example comes from Genesis:

North explains what the passage means by "the money has failed." It had become worthless due to government inflation. The social effects were profound. North marches through the history of Egypt to fill in the gaps.

The Pharaoh was rich, and the people of Egypt survived, but at very high cost: the loss of their freedom. They sold themselves into a form of slavery in order to buy food, for they sold their land and their children’s inheritance to Pharaoh (Genesis 47:19–23). That’s poverty with a vengeance. But they survived the famine. They bought their lives.

As part of the exposition, North provides a tutorial on the Austrian theory of money's origins, functions, and workings in society.

He explains this well-known passage: "Your silver has become dross, your wine mixed with water. (Isaiah 1:22)"

And also this one: "Diverse weights are an abomination to the Lord, and a false balance is not good. (Proverbs 20:23)"

He offers an entire chapter that carefully refutes the canard that the Bible forbids the charging of interest, and further explains what is meant by the condemnation of "usury."

It is all written in very clear language that is designed for teaching. There are also study questions at the end of each chapter. In this way, this book would make an excellent money and banking text for a private religious school - or for anyone who is concerned about what the Bible says about this critical subject.

North explains all the essential tenets of Mises's monetary theory.