A History of Folly 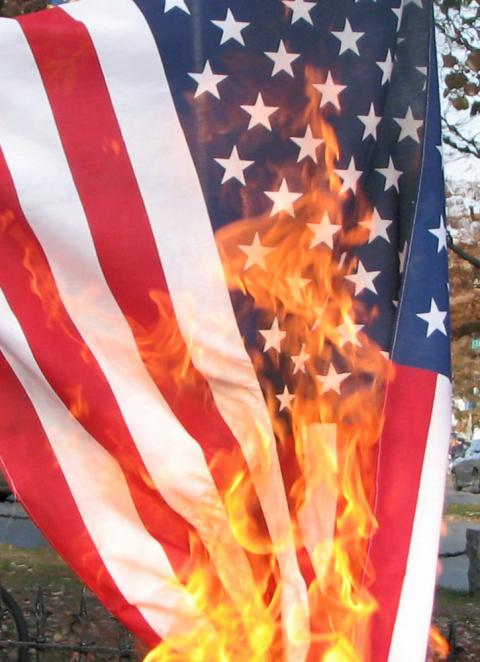 "How do I respond when I see that in some Islamic countries there is vitriolic hatred for America? I'll tell you how I respond: I'm amazed. I just can't believe it, because I know how good we are." --President George W. Bush

Before we celebrate the bombings of Afghanistan with hope of their expansion to other countries, let's pause and take a look back on the past fifty years of U.S. folly in the Middle East.

Defeat in the war against Israel discredits the ruling French-allied civilian regime. American agents and interests take the opportunity to provide support to Colonel Husni az-Zaim in a coup against the civilian regime. American agents call az-Zaim "our boy" and "Husni," but when they arrive to inform the new dictator whom to appoint as his ambassadors and cabinet, az-Zaim orders them to "stand at attention" and to address him as "His Excellency." Syria turns against the U.S. and descends into a series of coups and counter-coups and police-state government by quasi-military regimes.

In 1956, U.S. Secretary of State John Foster Dulles rescinds pledges of foreign aid for the Aswan Dam project. In response, Nasser uses this as a pretext to nationalize the Suez Canal, and uses its toll revenue to fund the dam. Britain, France, and Israel in response launch a joint invasion of Egypt with plans to occupy the Suez Canal. Arab support for the U.S. reaches its highest point when President Eisenhower, out of a distaste for European colonialism and European intervention in the Middle East, pressures the invading forces to abandon their invasion of Egypt.

After the government announces plans to grant the Soviet Union a territorial oil franchise in Northern Iran, modeled on the British one in the south for the British-owned Anglo-Iranian Oil Company, a local leader named Mohammed Mosaddeq leads the successful popular movement to oppose the grant to the Soviets and pushes further to nationalize all foreign oil facilities. Mosaddeq's popularity and influence increase to the degree that the shah appoints him prime minister.

Faced with economic and political turmoil, the shah attempts to remove Mosaddeq but is met with mobs and mass public demonstrations, causing the shah to flee the country. The CIA then backs Mosaddeq's opponents, who then overthrow his administration and sentence him to house arrest for the rest of his life. The shah is restored and becomes America's best friend and now controls the nationalized British oil facilities as well. Eventually, opposition to the shah's autocracy and U.S. political domination, as well as the Savak--the U.S.-trained Iranian secret police--grows into a nationalist revolution to oust the shah and the West, and in 1979, Iran too turns against the U.S.

In opposition to the British-client Iraqi regime, and in opposition also to Nasser's growing influence in Iraq, the bloodthirsty Colonel Kassem spearheads the American-supported military coup to overthrow the Iraqi royal family. The king and crown prince and most of the royal family are executed, and the prime minister is murdered by a mob. Years later, after Kassem has alienated all his allies except the Soviet Union and is overthrown and executed in 1963, United States support swings to a small group called the Ba'th Socialist Party. After many twists and turns, coups and elections, coups and revolutions, Saddam Hussein emerges as president of Iraq in 1976 after leading the coup that, with American insistence, installed that regime in 1968.

After the Iraqi monarchy is overthrown, the president of Lebanon requests U.S. military intervention to save his tottering regime from insurrections of United Arab Republican sympathizers. U.S. Marines arrive the next day in Beirut. Lebanon enters into a thirty-five-year period of instability and civil war.

In 1959, oil is discovered, which transforms the country. To elbow out the British, American support flows to a young reformist colonel in the Libyan army, Muammar al-Khadafy, who, once in power, turns against his U.S. sponsors, under the pretext of Western exploitation of Arab oil. He confiscates and nationalizes oil facilities and assets, including those of the local Jewish and Italian communities.

With the Islamic revolution in Iran, the U.S. tilts toward Iraq and Saddam Hussein as its proxy against the Iranians. Iraq and Hussein become America's front line in its attempt to crush the Islamic revolution in Iran. Armed and financed by Uncle Sam, Saddam invades Iran in 1980. The war would last for eight years and kill nearly a million people. Iraq is given advice and intelligence from the CIA and the Pentagon, and U.S. and British administrations provide Iraq with chemical and biological weapons-making knowledge and materiel to use against the Iranians. We all know how this turned out, but this time was different. The U.S. turned on Saddam.

With the country invaded by Israel and under threat of Syrian domination, American Marine "Peacekeepers" are shipped to Beirut. Opposition to their presence leads to the suicide bombing of the barracks. Some 309 Americans are killed, including the CIA's Mideast staff. In 1985, Lebanese CIA agents detonate a truck bomb in Beirut in an attempt to assassinate Sheikh Fadlallah, leader of the Hezbollah faction suspected of blowing up the American barracks two years earlier. Eighty-three civilians are killed and 240 wounded; Sheikh Fadlallah walks out of the mosque fifteen minutes later.

In retaliation for the terrorist bombing of a Berlin nightclub that killed a U.S. soldier, President Reagan bombs Libya, causing 130 deaths, including civilians near the French embassy. Khadafy's own residence is targeted, killing his adopted infant daughter, in an attempt to assassinate him. Libya is deliberately chosen as the target because it lacks defenses against air bombing.  A few months later, the U.S. admits to arms-trading with Iran, a state that the U.S. openly calls an instigator of "international terrorism," and one that is an ally of Libya. Arab cynicism about U.S. intentions and trustworthiness could only increase. The bombing of Pan Am 103 is considered revenge for these attacks on Libya.

After the U.S. ambassador to Iraq, April Gillespie, informs Saddam that the U.S. would have no opinion on Iraq's occupation of its "nineteenth province," the U.S. seizes the opportunity to justify its post-cold war internationalism by dubbing Saddam the "new Hitler." After mass slaughter and defeat, crippling sanctions and daily bombardment follow to persuade the Iraqi people that perhaps they would be better off without Saddam. Other observers, however, believe that the sanctions exist to prop up the price of oil.

The U.S. covertly aids the Taliban militia in its drive to end the post-Soviet-Afghani civil war. The U.S. sides with fundamentalist forces in Afghanistan--but not in Egypt, Algeria, or Saudi Arabia, where they are tortured and suppressed--in a foreign theater of the U.S. drug war. The U.S. government and the fundamentalist opposition to drugs would conjoin in an alliance to drive out Central Asian opium production.

President Clinton instructs the CIA to support and aid the Iraqi opposition forces in an operation to finally do away with Saddam Hussein. Iraqi exiles and refugees are trained and armed in the northern no-fly zone to descend on Baghdad. Sympathetic army generals within the regime are cultivated to assassinate Hussein, and efforts to destabilize Iraq begin--such as random car bombings as well as bombings of civilian public places.This plot collapses, however, as Saddam's spies have infiltrated the Kurds. Many Kurds back Saddam and turn on the U.S.-Kurdish faction. CIA agents in Kurdistan run for their lives, abandoning allies and tons of equipment and documents, and the network within Iraq is exposed and eliminated. This catastrophic failure leads to the firing of CIA chief John Deutch. Commentator Eric Margolis dubs this "Clinton's Bay of Camels," after JFK's Bay of Pigs fiasco.

President Clinton, in the midst of impeachment, rocket attacks camps in Afghanistan and a pharmaceutical plant in the Sudan, ostensibly to punish suspected terrorist Osama bin Laden for his involvement in the bombing of two American embassies in Africa.

After 1945, the U.S. schemed to eject the bankrupt British and French colonial empires in the Middle East--to elbow out Soviet influence, but, more likely, to secure political control over its oil. America's Oil Raj, as some commentators call the interdependent network of political, monetary, and military relationships--mirroring Britain's collection of territories and petty kingdoms on the Indian subcontinent--consists of the old imposed artificial colonial client states created by Britain and France. Outside of this "Oil Raj" exists a trade-sanction regime that the U.S. maintains on Iran, Iraq, Syria, Yemen, Libya, Algeria, the Sudan, Afghanistan, and, until recently, India and Pakistan--all some of the poorest places in the world.

The U.S. sends billions in financial and military aid to Egypt, Saudi Arabia, and Jordan each year to prop up these regimes against "fundamentalist" popular Islamic movements (which are the only way dissent can be expressed in these regimes, since Islam is the only thing these rulers can't outlaw). The U.S. also gives political support to corrupt and oppressive dictatorships, such as exist in Algeria and Tunisia. Everywhere, the U.S. favors and aids the status quo of political repression and dictatorship. This hypocrisy is what fuels Arab and Muslim anger.

Foreign Affairs commentator Eric Margolis noted recently the continuing cycle of American political involvement in the Middle East. He points out that in nearly every decade since the mid-fifties, a president of the United States has faced a challenge of a Muslim peril, an Arab or Muslim bogeyman that is everywhere and nowhere--Nasser, Khomeni, Khadafy, Saddam, and, now, bin Laden.  And every time, the results have been the same: U.S. demonizes this single man, only to watch him grow into a popular hero of the Arab masses--the Arabic or Islamic David that dares to stand up and confront the U.S. oil dominion over the Arab world and the economic and political distortion that the US leaves in its wake.

Now, the cycle is beginning again with Bill Clinton, George W. Bush, and Osama bin Laden.  And it has been reported that in the Middle East over the past few years, Osama has become the most common name for newborn boys.