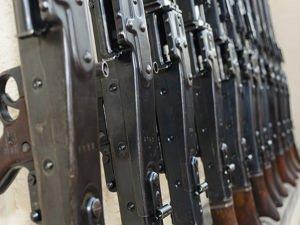 There is no shortage of theories or writings related to the rise of the Third Reich and the subsequent Holocaust. Stephen Halbrook’s 2013 book, Gun Control in the Third Reich offers a compelling and important account of the role of gun prohibition in aiding Hitler’s goals of exterminating the Jews and other “enemies of the state.” While much of the early gun prohibition was created with supposedly good intent, Halbrook carefully and meticulously details how a change in political regime facilitated manipulating some well-intentioned gun registration laws and other gun prohibition to be used in inconceivable ways.

Students of history as well as Second Amendment enthusiasts will find this a fascinating book and will find parallels between gun prohibition in pre-Nazi and Nazi Germany, and attempts to prohibit types of gun ownership and implement other forms of gun prohibition in the United States today. The current climate in the United States surrounding gun prohibition combined with a president who uses his office to impose executive order in ways not historically common gives many citizens pause, especially when looking at the era of the Third Reich. While certain states have imposed gun registration laws recently, enforcement of the laws remains unclear.

While Halbrook is careful to point out that a combination of factors led to the events of the Holocaust, there is no denying that many of the pre-war activities contributed to Hitler’s ability to disarm targeted groups, particularly the Jews. The rapid pace with which Hitler disarmed the populace in Germany is startling. Halbrook’s account is gripping, thorough, and full of legal documentation, leading the reader through the sometimes-daily changes in gun prohibitions that furthered Hitler’s agenda. Ultimately, the prohibitions enacted by the Nazi regime led to monopoly control of firearms by the Nazis and eliminated the ability of many groups in society to defend themselves. A similar progression in contemporary society related to government control of firearms and the firearms industry is a concern of many gun owners in the United States today.

In Part I of the book, a chaotic post-WWI Germany is the backdrop, a time when there were no established policies or laws pertaining to firearm ownership. Concern about firearms not being turned in after the war and conflict between extremist groups and the government led to the implementation of gun control laws. However, well-meaning clauses in the laws were subsequently used to provide the government with complete control over gun ownership, creating registries of gun and ammunition ownership, which ultimately fell into the hands of the Nazis. These lists were methodically used to disarm citizens. Through the first three chapters of the book, Halbrook does a masterful job of detailing the ever-changing gun control policies, ranging from the most extreme (execution on the spot) to the postured ‘relaxation’ of gun control laws that allowed possession of very expensive long arms that would not be affordable for the majority of the population.

Part II of the book opens with the naming of Hitler as chancellor of Germany at the end of January 1933, and the immediate utilization of the Weimar gun control policies to begin the Nazi campaign to seize arms and eradicate the so-called “enemies of the state” (all of whom were tagged as Communists). As a result, less than a month later, Hitler and Göring convinced President Hindenburg that an emergency decree was needed, which ultimately gave the Nazis the ability to eliminate constitutional assurances of liberty and free speech, a free press, the ability to assemble, and the right to privacy in personal communications. Furthermore, search and seizure of homes was authorized. This carte blanche for search and seizure essentially became the modus operandi of the Third Reich.

By the end of March, Hitler had succeeded in passing the “Enabling Law” which gave him the ability to create laws as he wished, with no requirement for consultation. Following this, the confiscation of weapons escalated. Municipal governments were informed that military weapons and ammunition had to be surrendered by the end of March. The Jews were targeted next, with a large raid in East Berlin on April 4, 1933. Jews were not forbidden to own firearms until 1938, but the raid led to confiscations and arrests. The 1928 Firearms Law was utilized to identify the so-called enemies of the state, locate them, interview them, and subsequently confiscate their weapons, thereby increasing Nazi control and eliminating private ownership of firearms from the majority of society.

Part III of the book details episodes of enforcement and expansion of gun prohibition by Hitler’s regime. To mark the one-year anniversary of Hitler’s power, the Law for the Reconstruction of the Reich was passed in January 1934, which centralized control over police and led to the replacement of the SA (Sturm Abteilung or Brownshirts) with the SS. Upon President Hindenburg’s death, Hitler assumed the presidency as well, allowing him the ability to rule by decree. Hitler could now declare laws at will and there was no right of appeal for those arrested. The military pledged allegiance to Hitler and the citizenry was instructed to follow Hitler’s decrees.

Confiscated firearms were redistributed to the police and concentration camp guards. The number of searches and arrests continued to escalate, and with the adoption of the Nürnberg Laws in September 1935, Germans or those with ‘kindred blood’ were decreed as citizens, leaving the Jews without citizenship and consequently, without civil rights. A new weapons law was drafted in November that would also forbid Jews from operating in the firearms industry. Though not yet enacted, the draft opened the door for the stealing of the gun manufacturing company, Simson & Co., by Hitler, who claimed that the Jewish owners were guilty of fraud. Additional accounts are given of exploitation of various incidents to further the Nazi campaign against the Jews.

Nazi Party control of the use and ownership of firearms was quickly implemented and far-reaching, with refinements to the Weapons Law continuing over the next few years. Eventually, in April 1938, Jews were required to register their personal assets if valued at over 5,000 marks. Just a few months later, Jews were required to register at local police stations to receive identification cards. Jews began to flee Berlin and other parts of Germany, as they were able.

In the concluding section of the book,Reichskristallnacht (Night of the Broken Glass) is detailed. Jews had been systematically disarmed, and their identity and locations were now on file with local police. It was simply a matter of time before the full shift into deportation and extermination of the Jews would begin. Records support that a campaign to arrest legally registered Jewish owners of firearms was now underway, along with the push by the Nazis to pressure Jews to flee Germany.

The complete confiscation of weapons held by Jews at this point was sparked by the November 7, 1938 assassination attempt of a German diplomat, supposedly by a Polish-Jewish teenager at the embassy in Paris. The Night of the Broken Glass came in the following few days. All Jewish weapons (including such things as letter openers) were confiscated, and all Jewish organizations were deemed illegal. With the Jews disarmed, Hitler’s plans could proceed with a defenseless populace. The majority of the non-Jewish German population was stunned by what had transpired but too afraid to protest. Isolated cases of resistance remained, such as the now well-known case of Oskar Schindler. When deportations commenced in October 1941, the possessions of the Jews were searched by the Gestapo for anything of value, and completed the disarming of the Jews. The dangers of silent witness are now well known.

As has been well documented, Jews were methodically attacked, their homes, businesses, and synagogues ransacked and burned. Upward of 30,000 Jews were arrested. Any Jews resisting arrest were ordered shot on the spot. Attacks on the Jews were to be carried out by the SA, with no interference by police. Jews arrested were to be sent to concentration camps for up to 20 years. The pogrom was so thorough that nearly all age appropriate, Jewish adult males in Stuttgart had been arrested. With the population afraid and disarmed, Hitler could proceed with little worry about resistance. The Court reinforced that there was no judicial review needed for activities of the Gestapo.

Halbrook concludes by noting that less government regulation and a tradition of rejecting tyranny could have led to a different outcome in Germany. Instead, systematic creation and manipulation of firearms registration and regulations, coupled with the decimation of individual citizen’s rights, enabled Hitler’s dictatorship and the slaughter of millions of innocent Jews and citizens of Nazi-occupied countries, as well as tens of thousands of Germans. It remains for all of us to wonder what might have been had people refused to register their firearms. Indeed, we should all take note and never forget.

Audrey D. Kline is associate professor of economics at the University of Louisville College of Business.