GET NEWS AND ARTICLES IN YOUR INBOXPrint
A
A
Home | Mises Library | Government Regulation: Another Hidden Tax 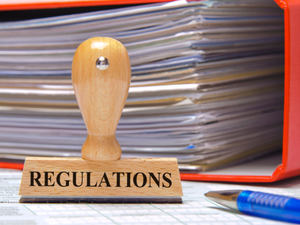 Perhaps due to it not being as readily quantifiable as government taxation, debt, welfare, and money creation; regulation has too often been superficially dealt with. In many ways, the largely “hidden tax” of regulation is a bigger threat to liberty, economy, and morality than other weapons of forceful government intervention.

What Is the Problem?

The total number of restrictions in federal regulations has grown from about 835,000 in 1997 to over one million by 2010, and the number of pages published annually in the Code of Federal Regulations, never substantially declined, and in fact has consistently grown. It has been estimated that regulatory compliance and economic impacts cost $1.863 trillion annually. This amounts to US households paying $14,974 annually in regulatory hidden taxes, with households thereby spending more on embedded regulation than on health care, food, transportation, entertainment, apparel and services, and savings.

However, this is just the proverbial tip of the regulatory-burden iceberg. The tangible burdens above are a quite manageable list of the more immediate impacts such as extra money spent by business to comply and government to enforce regulation. However, the intangible burdens are an almost infinite list of the less immediate impacts, such as lower performance throughout the economy in terms of entrepreneurship, innovation, growth, customer service, and jobs. The intangible burdens do not readily lend themselves to quantification like the tangible burdens do, and thus it is harder to understand the magnitude and even the exact nature of the almost infinite potential problems caused-and-effected. This is made harder due to the fact that value is always subjective (and ordinal) to each individual at any one point in time and, thus, there are no objective (or cardinal) opportunity costs and benefits of regulations as a whole that can simply be observed, calculated, and compared using cost benefit analysis (CBA).

Why Is There a Problem?

The most important of these intangible burdens of regulation are the unintended negative consequences on decentralized and dispersed knowledge and incentives. As Frédéric Bastiat pointed out: “In the economy … a law gives birth not only to an effect, but to a series of effects. Of these effects, the first only is immediate; it manifests itself simultaneously with its cause — it is seen. The others unfold in succession — they are not seen.”

From a Public Choice school perspective, the regulation problem is essentially one of government failure and rent seeking, noting that: “(1) individuals in government (politicians, regulators, voters, etc.) are driven by self-interest, just as individuals in other circumstances are, and (2) they are not omniscient.”

Worse still: “[S]pecial interests are disinclined to seek direct wealth transfers because their machinations would be too obvious. Instead, regulatory approaches that purport to provide public benefits confuse the public and reduce voter opposition to transfers of wealth to special interests.”

From an Austrian school perspective, the regulation problem is essentially one of economic calculation and bureaucracy. Ludwig von Mises explains: “Without market prices for the means of production, government planners cannot engage in economic calculation, and so literally have no idea if they are using society’s resources efficiently. Consequently, socialism [and regulatory interventionism] suffers not only from a problem of incentives, but also from a problem of knowledge.” Mises said regarding the latter that: “A bureau is not a profit-seeking enterprise; it cannot make use of any economic calculation.” And this inevitably leads to regulatory failure as: “… [t]he lack of [profit-and-loss, price and customer-oriented] standards [which] kills ambition, destroys initiative and the incentive to do more than the minimum required.” All of this is, of course, the antithesis of consumer-driven entrepreneurialism.

When people are free to act, they will always act in a way that they believe will maximize their utility. ... Any exchange that takes place on the free market occurs because of the expected benefit to each party concerned. If we allow ourselves to use the term “society” to depict the pattern of all individual exchanges, then we may say that the free market ‘maximizes’ social utility, since everyone gains in utility.

On the other hand:

What Is the Solution?

This combination was colorfully dubbed the “Bootleggers and Baptists” phenomenon. It has been observed that:

[U]nvarnished special interest groups cannot expect politicians to push through [regulation] that simply raises prices on a few products so that the protected group can get rich at the expense of consumers. Like the bootleggers in the early-20th-century South, who benefited from laws that banned the sale of liquor on Sundays, special interests need to justify their efforts to obtain special favors with public interest stories. In the case of Sunday liquor sales, the Baptists, who supported the Sunday ban on moral grounds, provided that public interest support. While the Baptists vocally endorsed the ban on Sunday sales, the bootleggers worked behind the scenes and quietly rewarded the politicians with a portion of their Sunday liquor sale profits.

More dauntingly, Murray Rothbard reminds us that, in many ways, the history of humanity can be seen as a race between bigger government versus freer markets:

Always man — led by the producers — has tried to advance the conquest of his natural environment. And always men — other men — have tried to extend political power in order to seize the fruits of this conquest over nature. … In the more abundant periods, e.g., after the Industrial Revolution, [freer markets took] a large spurt ahead of political power [including over regulation], which ha[d] not yet had a chance to catch up. The stagnant periods are those in which [such] power has at last come to extend its control over the newer areas of [freer markets].

It will not be easy to slow, stop, and reverse the century-plus growth of the regulatory state in the US and around the world. The crucial job of pursuing deregulation cannot just be left to politicians from the top down. It will need to come more from as many voters and seceders as possible from the bottom up and every direction in between.

Darren Brady Nelson is an Austrian School economist and liberty evangelion as well as a C.S. Lewis and G.K. Chesterton style Christian. He is currently the Chief Economist at LibertyWorks of Brisbane Australia and a long-time policy advisor to The Heartland Institute of Chicago USA. He is also a regular commentator in traditional and online Australian and American media.