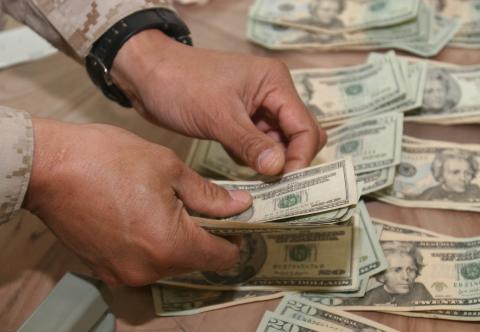 If socialists of old resented Pravda for giving them a bad name, free enterprisers ought to feel the same about the Wall Street Journal's editorial page. Its defenses of profit, capitalism, and privatization often cry out for correction, if only to save the good name of free markets from being invoked to protect capitalists from careful moral scrutiny.

For here we have the editorial page coming to the defense of Halliburton against attacks by Democrats. The page claims that the Kerry-Edwards ticket is criticizing this mega-well-connected, warfare state pillager as a proxy for all of American business. True or not, the Journal is guilty of something far worse: defending Halliburton on grounds that this parasite embodies the very heart of free enterprise.

Senator Kerry tried to back away from his primary-season labelling of companies that send jobs abroad as "Benedict Arnolds." Now he's back attacking Halliburton for doing business overseas. All of this marks a striking return to the Old Democrat distrust of all private enterprise, which held that if it moves, tax it, if it keeps moving, regulate it, and when it stops moving, subsidize it. The idea of anyone making a dime of profit by taking over a government function and doing it better is anathema on the Kerry ticket, and the idea of that person then going into public service even worse.

If that's all you knew about the company, you might think that this was Federal Express or a cell-phone company that picked up the pieces after the government failed, instead of the largest corporate welfare client in the history of the world. For the two years following September 11, the company enjoyed at least $2.2 billion in military subsidies. Overall, it enjoys $18 billion in government contracts to support its offices in 70 countries.

To look at the details (there are hundreds of sites and organizations that track its activities) is to see into the heart of the modern state run amok. The history of Halliburton makes the food-stamp program look like good government.

Halliburton makes a mockery of the term private enterprise. The profits are private, to be sure, but the risk is socialized. It has very little to sell you and me or any other member of the consumer class. It has vast amounts of stuff to sell the state, and what it produces it does with that goal in mind.

Call it the leading industry in the military-industrial complex. Regard it as the prime player in the great government-business partnership. View it as illustrative of the reality that the real scandals in government are not what is illegal but what is considered wholly legitimate. But whatever you do, don't call it private enterprise.

Murray Rothbard asked the burning question in his 1974 book For a New Liberty: "how can the rightist favor a free market while seeing nothing amiss in the vast subsidies, distortions, and unproductive inefficiencies involved in the military-industrial complex?" If you have doubts that these people do just that, consider a speech that Richard Cheney gave during his interval between government jobs and as head of Halliburton. He defended what he considered free enterprise but it amounted to little more than a defense of his company's right to live off government largesse.

For the Republicans to claim that it is perfectly wonderful for the former CEO of the largest federal contractor to be the vice president, to continue to receive checks from the company far larger than most people's annual salaries, and that there is nothing at all unseemly going on, is to take us all for fools. It is the equivalent of Clinton's denials, except with consequences that reach into every American bank account and affect the entire globe. The connection between the Bush administration and Halliburton has to be the most open conspiracy in the entire sorry history of American government-business partnerships, in which both sides get rich at our expense.

For the Wall Street Journal to defend this as free enterprise represents a very low form of ideological agitation. To review, free enterprise means offering a good or service to the public which its individual members are free to buy or refrain from buying. To profit then becomes a signal that the company has served people well. But there is always and everywhere a risk: the revenue stream could end tomorrow based on the exercise of free will by the customer. This is true from the largest company (even Microsoft) to the smallest company (think of a local restaurant that never knows day to day whether anyone will set foot into its front door).

A federal contractor is something entirely different. The service to be provided is decided upon by legislators or bureaucrats. The revenue is therefore not by virtue of consumers' decisions but by political allocations. The services provided are not subject to a profit and loss test. The money is there regardless.

The contractors themselves become masters at doing what they do best, which is not serving society but serving the state. To be sure, modern war would be impossible without private enterprise. As incompetent as you think the military is, imagine if it had to make its own airplanes, bombs, bullets, and provide all its own services. Mises was correct that militarily victorious states owe it all to production by privately held firms.

This obviously presents certain moral hazards for the free market. The Iraq War has been an amazing bonanza for Republican-connected corporate clients of the federal government. In fact, the contracting out of the war is a major reason why there are so few critics of this war on the right. Many of them have been bought off by the promise or the reality of a well-placed paycheck.

Jack Kemp, for example, used to be a severe critic of the Iraq war (sample 1: "The obsession of some members of the press and the political establishment to attack Iraq right now is disturbing"). Then he became an advocate of the privatization of Iraqi oil (sample 2: "The privatization of Iraq's oil should be done immediately"). Then he finally turned to congratulating President Bush for his wonderful wartime leadership (sample 3: "President Bush has played his cards well on Iraq"; sample 4: "a vision of the future recognizing the importance of national security including the reconstruction of Iraq").

Might his transformation be due to his dinner with Richard Cheney and the founding of a government contractor in Iraq called Free Market Global based in Iraq, with General Tommy Franks on the board? One wonders how many other voices have been similarly silenced or compromised by the well-placed consulting fee and government contract.

Privatization is a wonderful idea if it means that functions that belong to the market economy are turned over to the market economy and subjected to the competitive marketplace and the test of profit and loss. It is not a good idea if it merely means that private parties get the loot for projects that would otherwise serve no purpose in a market. It is not privatization to contract out the collection of taxes, for example. Nor it is an example of genuine commerce to create and sustain corporations that do nothing but live off the state.

Contracting out is indeed more efficient than government provision. And for some services, such as garbage collection or even public schools, the public might welcome the change. It might save tax money. It will surely improve the delivery of services. But this process goes way too far when the entire warfare state comes to be contracted out. There are some government services (killing, taxing, regulating, etc.) that should not be delivered efficiently. The biggest problem here is not that this corrupts government (as the good-government crowd might say) but rather that it corrupts free enterprise.

Indeed, to call such companies as Halliburton great examples of capitalist success is a sure-fire way to discredit free enterprise. For the right to do this is nothing short of a gift to the socialist left, which wants to characterize all business and market exchange as an expression of a power relation. This is why socialists have focused so heavily on the role of corporations in assisting the warfare state in its dirty business. It is also why so many socialists have written passionately against the "merchants of death." Let us rephrase a point Mises often made: the problem isn't the merchant part of the phrase; it is the death part.

If Halliburton were cut off the government payroll, I have no doubt that many of its intellectual and physical resources could be profitably employed in a genuine market setting. Let's forget about privatizing the warfare state and privatize Halliburton instead. Let it, and all its far-flung clients the world over, sink or swim in a genuine free-market economy. At that point, we'll raise a glass to its profitability. Until then, it deserves all the disdain ever heaped on any able-bodied welfare cheat.