The Gold Standard Act of 1900 and After 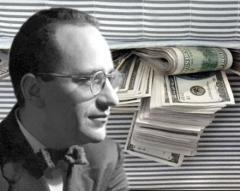 Any reform legislation had to wait until after the elections of 1898, for the gold forces were not yet in control of Congress. In the autumn, the executive committee of the Indianapolis Monetary Convention mobilized its forces, calling on no less than 97,000 correspondents throughout the country through whom it had distributed the preliminary report. The executive committee urged its constituency to elect a gold-standard Congress; when the gold forces routed the silverites in November, the results of the election were hailed by Hanna as eminently satisfactory.

The decks were now cleared for the McKinley administration to submit its bill, and the Congress that met in December 1899 quickly passed the measure; Congress then passed the conference report of the Gold Standard Act in March 1900.

The currency reformers had gotten their way. It is well known that the Gold Standard Act provided for a single gold standard, with no retention of silver money except as tokens. Less well known are the clauses that began the march toward a more “elastic” currency. As Lyman Gage had suggested in 1897, national banks, previously conﬁned to large cities, were now made possible with a small amount of capital in small towns and rural areas. And it was made far easier for national banks to issue notes. The object of these clauses, as one historian put it, was to satisfy an “increased demand for money at crop-moving time, and to meet popular cries for ‘more money’ by encouraging the organization of national banks in comparatively undeveloped regions.”19

The reformers exulted over the passage of the Gold Standard Act, but took the line that this was only the ﬁrst step on the much-needed path to fundamental banking reform. Thus, Professor Frank W. Taussig of Harvard praised the act, and greeted the emergence of a new social and ideological alignment, caused by “strong pressure from the business community” through the Indianapolis Monetary Convention. He particularly welcomed the fact that the Gold Standard Act “treats the national banks not as grasping and dangerous corporations but as useful institutions deserving the fostering care of the legislature.” But such tender legislative care was not enough; fundamental banking reform was needed. For, Taussig declared, “The changes in banking legislation are not such as to make possible any considerable expansion of the national system or to enable it to render the community the full service of which it is capable.” In short, the changes allowed for more and greater expansion of bank credit and the supply of money. Therefore, Taussig concluded, “It is well nigh certain that eventually Congress will have to consider once more the further remodeling of the national bank system.”20

In fact, the Gold Standard Act of 1900 was only the opening gun of the banking reform movement. Three friends and ﬁnancial journalists, two from Chicago, were to play a large role in the development of that movement. Massachusetts-born Charles A. Conant (1861–1915), a leading historian of banking, wrote A History of Modern Banks of Issue in 1896, while still a Washington correspondent for the New York Journal of Commerce and an editor of Bankers Magazine. After his stint of public relations work and lobbying for the Indianapolis convention, Conant moved to New York in 1902 to become treasurer of the Morgan-oriented Morton Trust Company. The two Chicagoans, both friends of Lyman Gage, were, along with Gage, in the Rockefeller ambit: Frank A. Vanderlip was picked by Gage as his assistant secretary of the Treasury, and when Gage left ofﬁce, Vanderlip came to New York as a top executive at the ﬂagship commercial bank of the Rockefeller interests, the National City Bank of New York. Meanwhile, Vanderlip’s close friend and mentor at the Chicago Tribune, Joseph French Johnson, had also moved east to become professor of ﬁnance at the Wharton School of the University of Pennsylvania. But no sooner had the Gold Standard Act been passed when Joseph Johnson sounded the trump by calling for more fundamental reform.

In the United States, however, there is no single business institution, and no group of large institutions, in which self-interest, responsibility, and power naturally unite and conspire for the protection of the monetary system against twists and strains.

In short, there was far too much freedom and decentralization in the system. In consequence, our massive deposit credit system “trembles whenever the foundations are disturbed,” that is, whenever the chickens of inﬂationary credit expansion came home to roost in demands for cash or gold. The result of the inelasticity of money, and of the impossibility of interbank cooperation, Johnson opined, was that we were in danger of losing gold abroad just at the time when gold was needed to sustain conﬁdence in the nation’s banking system.22

After 1900, the banking community was split on the question of reform, the small and rural bankers preferring the status quo. But the large bankers, headed by A. Barton Hepburn of Morgan’s Chase National Bank, drew up a bill as head of a commission of the American Bankers Association, and presented it in late 1901 to Representative Charles N. Fowler of New Jersey, chairman of the House Banking and Currency Committee, who had introduced one of the bills that had led to the Gold Standard Act. The Hepburn proposal was reported out of committee in April 1902 as the Fowler Bill.23

The Fowler Bill contained three basic clauses. One allowed the further expansion of national bank notes based on broader assets than government bonds. The second, a favorite of the big banks, was to allow national banks to establish branches at home and abroad, a step illegal under the existing system due to ﬁerce opposition by the small country bankers. While branch banking is consonant with a free market and provides a sound and efﬁcient system for calling on other banks for redemption, the big banks had little interest in branch banking unless accompanied by centralization of the banking system. Thus, the Fowler Bill proposed to create a three-member board of control within the Treasury Department to supervise the creation of the new bank notes and to establish clearinghouse associations under its aegis. This provision was designed to be the ﬁrst step toward the establishment of a full-ﬂedged central bank.24

Although they could not control the American Bankers Association, the multitude of country bankers, up in arms against the proposed competition of big banks in the form of branch banking, put ﬁerce pressure upon Congress and managed to kill the Fowler Bill in the House during 1902, despite the agitation of the executive committee and staff of the Indianapolis Monetary Convention.

With the defeat of the Fowler Bill, the big bankers decided to settle for more modest goals for the time being. Senator Nelson W. Aldrich of Rhode Island, perennial Republican leader of the U.S. Senate and Rockefeller’s man in Congress,25 submitted the Aldrich Bill the following year, allowing the large national banks in New York to issue “emergency currency” based on municipal and railroad bonds. But even this bill was defeated.

Meeting setbacks in Congress, the big bankers decided to regroup and turn temporarily to the executive branch. Foreshadowing a later, more elaborate collaboration, two powerful representatives each from the Morgan and Rockefeller banking interests met with Comptroller of the Currency William B. Ridgely in January 1903, to try to persuade him, by administrative ﬁ at, to restrict the volume of loans made by the country banks in the New York money market. The two Morgan men at the meeting were J.P. Morgan and George F. Baker, Morgan’s closest friend and associate in the banking business.26 The two Rockefeller men were Frank Vanderlip and James Stillman, longtime chairman of the board of the National City Bank.27 The close Rockefeller-Stillman alliance was cemented by the marriage of the two daughters of Stillman to the two sons of William Rockefeller, brother of John D. Rockefeller, Sr., and longtime board member of the National City Bank.28

The meeting with the comptroller did not bear fruit, but the lead instead was taken by the secretary of the Treasury himself, Leslie Shaw, formerly presiding ofﬁcer at the second Indianapolis Monetary Convention, whom President Roosevelt appointed to replace Lyman Gage. The unexpected and sudden shift from McKinley to Roosevelt in the presidency meant more than just a turnover of personnel; it meant a fundamental shift from a Rockefeller-dominated to a Morgan-dominated administration. In the same way, the shift from Gage to Shaw was one of the many Rockefeller-to-Morgan displacements.

On monetary and banking matters, however, the Rockefeller and Morgan camps were as one. Secretary Shaw attempted to continue and expand Gage’s experiments in trying to make the Treasury function like a central bank, particularly in making open market purchases in recessions, and in using Treasury deposits to bolster the banks and expand the money supply. Shaw violated the statutory institution of the independent Treasury, which had tried to conﬁne government revenues and expenditures to its own coffers. Instead, he expanded the practice of depositing Treasury funds in favored big national banks. Indeed, even banking reformers denounced the deposit of Treasury funds to pet banks as artiﬁcially lowering interest rates and leading to artiﬁcial expansion of credit. Furthermore, any government deﬁcit would obviously throw a system dependent on a ﬂow of new government revenues into chaos. All in all, the reformers agreed increasingly with the verdict of economist Alexander Purves, that “the uncertainty as to the Secretary’s power to control the banks by arbitrary decisions and orders, and the fact that at some future time the country may be unfortunate in its chief Treasury ofﬁcial … [has] led many to doubt the wisdom” of using the Treasury as a form of central bank.29 In his last annual report of 1906, Secretary Shaw urged that he be given total power to regulate all the nation’s banks. But the game was up, and by then it was clear to the reformers that Shaw’s as well as Gage’s proto–central bank manipulations had failed. It was time to undertake a struggle for a fundamental legislative overhaul of the American banking system to bring it under central banking control.30