Get Government Out of Coin Manufacture 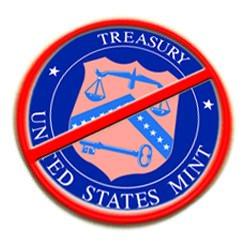 Coin dealers and collectors are still reeling from the US Mint's announcement that it had run out of American Eagle gold coins. But what ought to surprise every American isn't that a government agency came up short. It's that the US government should be making little metal discs at all.

Coin shortages are nothing new. A few months before running out of gold Eagles, the US Mint had to ration silver Eagles. Not long before that, pennies were in very short supply. Nor are other government mints any better. Back in 2007, for instance, Argentina had such a severe change shortage that its panhandlers nearly starved to death, while in southern China, 100-yuan coins commanded a whopping 25 percent premium.

Why are coin shortages so common? Governments typically blame unexpected changes in demand. But suppliers of all sorts of other goods manage to avoid running out, despite even more dramatic demand changes. So what's special about coins? An old chestnut says that if the government were put in charge of the desert, pretty soon there'd be a sand shortage. Recall the plight of consumers under socialism: socialist governments tried to make everything and eventually ran out of everything.

Now socialism is dead, but not when it comes to coining. So coin shortages keep breaking out, as they have ever since governments first monopolized coin making in ancient times.

In their defense, government officials insist that private industry can't possibly be trusted to make coins of any sort. An obvious problem with this argument is that, if it were really true, government mints could always outcompete would-be rivals, and governments wouldn't have to outlaw private coinage, except for outright counterfeiting. Yet governments routinely punish private firms that try to issue their own distinct coins. Just last year, for example, the FBI raided Idaho's private Sunshine Mint, confiscating its inventory of coins and metal. That mint's products included one-ounce "Liberty" gold and silver dollars that competed directly with the US Mint's Eagles, but were plainly distinguished from them — and were never out of stock.

What's more, private industry did occasionally take charge of coinage in the past, and did so quite successfully. During the gold rush, for instance, no fewer than 15 private mints went into business, sparing prospectors the need to send their gold all the way to Philadelphia or New Orleans to be coined. Although some of the mints made substandard coins, they rapidly went out of business. The ones that survived produced coins every bit as good as — and in some cases better than — those from the US Mint. The survivors' reputations were so good, in fact, that they withstood both local attempts to outlaw private coinage and the opening, in 1854, of a San Francisco branch of the US Mint. To end this embarrassing competition, Congress bought out the biggest private mint in 1863 and outlawed the rest a year later.

Private coiners played a still bigger role in Great Britain's Industrial Revolution, which was in danger of grinding to a halt thanks to a shortage of official coins. When the Royal Mint refused to do anything about the shortage, private entrepreneurs took matters into their own hands. From 1787 to 1797 and again from 1811 to 1818, the greater part of Great Britain's stock of coins came not from the Royal Mint in London but from a score of private mints in Birmingham.

"Great Britain's private coins were more popular than official ones, and for good reason…"

Far from having been inferior to their Royal Mint counterparts, as government officials would have it, Great Britain's private coins were more popular than official ones, and for good reason: being much harder to counterfeit, they were more likely to be genuine. But the British government cared more about protecting the Mint's monopoly than with catering to the public's need for sound money, so in 1818 it banned private coins, even though official ones were still in short supply.

Back in 1780 Edmund Burke proposed, in his famous speech on economical reform, that the Royal Mint be privatized. "A mint," he insisted, "is a manufacture, and it is nothing else; and it ought to be undertaken upon the principles of a manufacture; that is, for the best and cheapest execution."

If a government-run coin factory seemed wasteful in Burke's day, how much stranger is it for modern governments to be churning out coins? A lot stranger, when you come to think of it, than it is for them to run out.

An earlier version of this article was published on NumismaticNews.net.