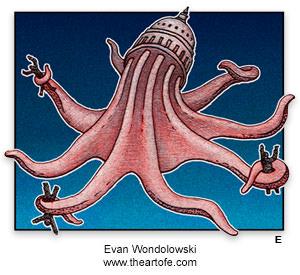 02/19/2010Gary Galles
Earlier this month, I happened upon the fact that February 19 is the anniversary of Garet Garrett's 1878 birth. I had read little of his writing, but I had been impressed by a quote of his about individualism: "In principle, I believe that the less we act upon the lives of others for good or evil — the less the better. Each one saves himself or he is not saved."

I had also seen some very positive references about his libertarian views and his clear-eyed opposition to the growing "coils of octopean government" under FDR. These references came from those who treasure liberty, including Murray Rothbard and Jeff Tucker (who called Garrett "a forgotten genius," who offered "a sparkling vision of peace under free markets"). So I decided to begin to rectify that lack.

Unfortunately, I had little time, so I had to pick where to start. I let Ludwig von Mises choose. Since, in describing Garrett's The People's Pottage, he said "His keen penetration and his forceful, direct language are … unsurpassed by any author," that is where I turned.

In each of its essays, I could see why Garrett has been called "one of the most eloquent defenders of freedom in America." But I was particularly struck by his essay entitled "Ex America," because it was written in response to an earlier case of metastasizing government that had many parallels to our current situation.

Therefore, when I didn't find anything at the Mises site dealing specifically with that essay, I thought some excerpts from it might be appropriate to honor Garrett's birthday and to pique the curiosity of others who have not yet discovered him:

About 1900 began the flowering of … the intellectual … a social theorist who knew more than anybody else about everything and all about nothing, except how to subvert the traditions and invert the laws.

The first great turning … was the amendment of the Constitution in 1913, giving the Federal government power to impose a progressive tax on all incomes … one of the cardinal points of the Communist Manifesto.… Nobody else dreamed … that the Federal income tax would be used not for revenue only … but for the purpose of redistributing the national wealth.

Then the Federal government seized control of money, credit, and banking.… Formerly free government was understood to mean the government of a free people. But now that meaning changed. The government itself was free. Free from what? Free from the ancient limitations of money.… After that it was merely nostalgic to talk any more of controlling government or limiting its powers of self-aggrandizement.

No one can imagine that [people] would have said yes … to accept the coils of octopean government, the dim-out of the individual.… Their answer would have been no, terrifically.

They did not vote for the New Deal. They voted against it.… They elected Mr. Roosevelt on a platform that promised less government, a balanced Federal budget, and sound money. Nevertheless, when it came, they embraced the New Deal, with all its extensions of government authority, its deficit spending and its debasement of the currency.

They never voted for the Welfare State, with its distortions of the public debt, its basic socialism, its endless vista of confiscatory taxation, its compulsions and its police-like meddling with their private lives.… Yet step by step they accepted it and liked it.

They never voted for whittling away the restraints imposed by the Constitution on the power of executive government. They were deeply alarmed when … President Roosevelt asked why the Constitution should be permitted to stand in the way of a desirable law; and their feeling for the sanctity of the Constitution was so strong that when Mr. Roosevelt proposed to enlarge the Supreme Court in order to pack it with New Deal minds he was defeated by a spontaneous protest of extraordinary intensity.

Nevertheless, since then the mind of the Supreme Court has changed.… Formerly its business was to say what the law was, according to the Constitution; if people did not like the law they could change it, only provided they changed it in a lawful manner by amending the Constitution. Now the Supreme Court undertakes to say what is justice, what is public welfare, what is good for the people and to make suitable inflections of the Constitution. Thus law is made subordinate to the discretions and judgments of men, whereas the cornerstone of freedom was that the government should be a government of law, not of men.

They did not vote to debase the dollar. Everything that has happened to money was done to it by government … with an air of leave-these-things-to-the-wisdom-of-government.

A momentous change has taken place in the relationship between government and people … people have lost control of government. It is a thing too vast, too complex, too pervasive in all the transactions of life to be comprehended by the individual citizen. Indeed … the government no longer comprehends itself.

The power of the individual to resist the advance of its authority … has diminished. Even organized pressure groups … no longer resist. They ride it and use their influence to gain freer access to the illusory benefits that now flow in all directions from Washington.

The taxpayer who now goes on his errand to Washington … is timorous and respectful. He does not tell the bureaucrat; the bureaucrat tells him. He has the sense of dealing with a vast impersonal power, and it is power that may legally take away his entire income.

When now we speak of government we mean not Congress, and of course not the Supreme Court, but the executive power, seated in the White House and spread also among various administrative agencies that make and execute their own laws, thereby exercising legislative, executive, and judicial functions, all three at once.

The founders of the American government knew history. As far back as they could see all governments … had certain features in common, such as a natural appetite for power, a passion to act upon peoples' lives, a will to live, resources of self-perpetuation and longings for grandeur.… the founders of the American government did not attempt to formulate this law of inner compulsion. What they did was to create a government that could not obey such a law if one existed.

Under pretense of making money cheap for the people, the government creates money for itself. When it goes into debt for what it calls the public welfare it first fills its own purse and then, as it spends the money, it extends its authority over the lives and liberties of the people. It suborns them. Their consent is bought … corrupting the people for their own good.

As the government expands explosively the people will lose control of it … they learn to become dependent on government for aid and comfort … first enticed by the benefits and then obliged by authority to exchange freedom for status.… The moral debacle is cancerous and possibly incurable.

When the signs of trouble appear, what will the government do?… It will be obliged to take control of the entire economy, as the New Deal tried to do in the first one hundred days of the revolution.

What the New Deal planners tried to do was strange and sudden. What the government will do in the next crisis is predetermined. We [will] be through with the fiction of free prices, free markets, free contracts, and free enterprise; we shall probably be through also with inflation. A government that has arrived at the ultimate goal of total power may dispense with inflation.

Garet Garrett spoke boldly and consistently against "the dim-out of the individual" represented by the political centralization and bureaucratization of American life under FDR. As his Facebook page describes it, "As the 20th century progressed, he believed that Americans were signing away their birthright of freedom, through trading in their responsibilities of self-governance and self-responsibility, in return for more socialist measures such as FDR's New Deal expansion of government."

Since we have moved still further down the path toward abandoning what Garrett defended as "limited constitutional government in the republican form," we could profit greatly from revisiting his insights.