A Future of Private Roads and Highways 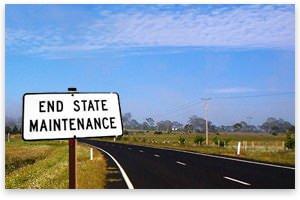 [Introduction to The Privatization of Roads and Highways. Walter Block writes, "This book is dedicated to my fellow Americans, some 40,000 of them per year who have died needlessly in traffic fatalities. It is my sincere hope and expectation that under a system of private roads and highways in the future, that this number may be radically reduced."]

I advocate the complete, total, and full privatization of all roads, streets, highways, byways, avenues, and other vehicular thoroughfares. And I am serious about this, deadly serious.

This is so far off the radar of public-policy analysis and apart from the concerns of politicians, pundits, and commentators that few people will take it seriously. Do not be one of them. Your very life may be at stake. For over 40,000 people die on the nation's roadways every year, and you or a loved one might one day join this horrid list.

Do not be misled by the oft-made contention that the actual cause of highway fatalities is speed, drunkenness, vehicle malfunction, driver error, etc. These are only proximate causes. The ultimate cause of our dying like flies in traffic accidents is that those who own and manage these assets supposedly in the name of the public — the various roads bureaucrats — cannot manage their way out of the proverbial paper bag. It is they and they alone who are responsible for this carnage.

This does not mean that, were thoroughfares placed in private hands, the death toll would be zero. It would not. But, at least, every time the life of someone was tragically snuffed out, someone in a position to ameliorate these dangerous conditions would lose money, and this tends, wonderfully, to focus the minds of the owners. This is why we do not have similar problems with bananas, baskets, and bicycles, or the myriad other goods and services supplied to us by a (relatively) free-enterprise system.

If the highways were now commercial ventures, as once in our history they were, and upward of 40,000 people were killed on them annually, you can bet your bottom dollar that Ted Kennedy and his ilk would be holding Senate hearings on the matter. Blamed would be "capitalism," "markets," "greed," i.e., the usual suspects. But it is the public authorities who are responsible for this slaughter of the innocents.

Is there anything of a practical nature that can be done to solve the problem in the short run? Probably not. But do not give up hope. Right before the decline and fall of communism in Russia and Eastern Europe, there were few who thought this scourge would soon be removed.

Another benefit of the present book is that it attempts to demonstrate the viability, efficaciousness, and, yes, morality, of the private-enterprise system, addressing a difficult case in point. If we can establish that private property and the profit motive can function even in "hard cases" such as roads, the better we can make the overall case on behalf of free enterprise. 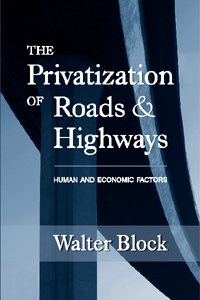 The book is organized according to the following plan. The basic theory of privatization, specifically as applied to roadways, is put forth. The case on behalf of commercializing this sector of the economy is made on the basis of improving road safety and decreasing traffic congestion. Next, this theory is applied to a whole host of related issues, such as automobile insurance, holding parades on public streets, and immigration. Our present institutional arrangements are characterized as socialistic. Then, we assume as a given the goal of privatizing traffic arteries, and instead focus on the very complex process of getting to there from here: what are the problems of transition, how would the authorities move from a situation under their control to market determination, etc.? The next part of the book is given over to dealing with objections to the foregoing. Critiques are launched at several commentators, including Gordon Tullock, Lawrence White, Herbert Mohring, and Robert Poole. This book concludes with an interview conducted with me by several Canadian libertarians.

Introduction to The Privatization of Roads and Highways. Walter Block writes, "This book is dedicated to my fellow Americans, some 40,000 of them per year who have died needlessly in traffic fatalities. It is my sincere hope and expectation that under a system of private roads and highways in the future, that this number may be radically reduced."