Friedrich Hayek as a Teacher 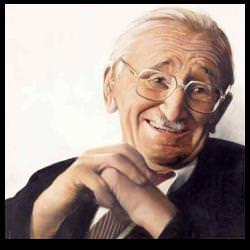 In 1969, Friedrich Hayek taught at UCLA; he was Flint Professor of Philosophy, a visiting position of great prestige which had in past years been held by Bertrand Russell and Alfred Tarski. I was then a senior and enrolled in his only undergraduate class, Philosophy of the Social Sciences. He also taught a graduate seminar that covered the manuscript of his then forthcoming Law, Legislation, and Liberty. I was too shy to ask Hayek whether I could attend this also; but memories of what I was fortunate enough to hear have stayed with me in the forty years since that time.

Most of the students — I think there were about thirty-five in the class — hadn't previously heard of Hayek; but it was at once obvious to everyone that their professor was someone of extraordinary intelligence. (One student who already admired Hayek was David Glasner, who went on to become a well-known economist.)

At the first session, Hayek told us that in order to understand the philosophy of the social sciences, one needed to know something about the philosophy of science in general. Because he would not be lecturing on this subject, he asked everyone to read a book on the topic, such as his friend Karl Popper's The Logic of Scientific Discovery. He did not just tell us this but went around the room, asking each person to promise to read a book on the philosophy of science. After a number of people had promised, someone asked Hayek why it was necessary for each person to promise individually. Hayek replied that he wanted to make sure everyone had made a commitment. He did not refer to this requirement again, except once to wonder whether those who had chosen Popper's book had quit when they got to the sections on probability theory.

Mention of Popper's book brings to mind another time he mentioned it. When he called the book The Logic of Research, a student raised his hand. "Isn't the title The Logic of Scientific Discovery?" he asked. Hayek smiled and responded, "You are quite right that when the book appeared in English translation in 1959, it was under the title The Logic of Scientific Discovery. But you see, when the book was published in Vienna in 1935, it was under the title Logik der Forschung, which translates, "The Logic of Research." It was very hard to catch Hayek out on a factual inaccuracy, although I recall he once erred on the date of Julius Caesar's assassination.

Hayek delivered his lectures seated at a desk. He never used notes, but his lectures could easily be printed verbatim. When a student asked a question, Hayek would pause and then deliver an answer in language as equally exact as his lectures. He would sometimes twist his head in order to hear the question better. He said that he found it an interesting historical coincidence that he was deaf in the left ear, and Karl Marx had been deaf in the right ear.

The main assigned reading was an anthology edited by May Brodbeck, Readings in the Philosophy of the Social Sciences. She was a positivist, whose views contrasted sharply with Hayek's. As a counterweight, he also assigned his own The Counter-Revolution of Science. (Her positivist views did not prevent her from becoming friends with Murray Rothbard.) Often, his lecture would be a critical reading of a selection from the anthology. As he countered the positivist missteps, he would flick ashes from the cigarettes he smoked on the pages of the offending article.

A noted opponent of methodological individualism, Othmar Spann, was one of Hayek's teachers at the University of Vienna. He reversed methodological individualism, holding that the collective was prior to the individual. Spann used an odd diagram, which showed a larger and smaller circle connected at the top by arcs, to illustrate his theory. Hayek said that when Spann put this diagram on the blackboard and had his back turned to the class, students would puts their arms over their heads to make fun of Spann.

Some people explain social institutions by appealing to their function. Marxists, e.g., claim that the function of the relations of production is to advance the development of the forces of production. Methodological individualists do not accept this type of explanation, unless the functions can be cashed out in individuals' actions. On this topic, Hayek recommended a famous article by Robert K. Merton, "Manifest and Latent Functions." He said, "Merton is about the best of the sociologists. Of course, this isn't saying very much."

Methodological individualism, as Hayek taught it, went together with subjectivism. To explain social phenomena, one had to start from the preferences and perceptions of individual actors. He rejected strongly behaviorist pretensions to characterize thought and perception without reference to private impressions. He said, e.g., that perceived colors could not be identified with an objectively measurable place on the light spectrum. He develops this argument, along with many related ones, in more detail in The Sensory Order. I managed once to make him laugh with a joke about two behaviorists who meet each other. One of them says, "You're fine; how am I?"

Of course, appeal to the individual actor does not imply that all social institutions are the product of conscious intentions. To the contrary, Hayek emphasized the importance of unintended consequences; the study of these consequences, he held, was the principal task of social science. He emphasized that Kant's notion of "unsocial sociability" influenced him here. Overall, he said, Kant and Hume were the two philosophers from whom he had learned the most.

All readers of Hayek will be familiar with tacit knowledge; and once he gave us a striking example of this. He said that a few years before, he had resumed skiing after a long absence from the slopes. While he was skiing downwards at a fast pace, he suddenly saw a body lying directly in front of him. Without thinking about it, he immediately swerved aside.

Hayek emphasized the a priori character of praxeology much less than Mises did. (Though Hayek differed from Mises on this issue of method, he held Mises in the greatest esteem. He recommended Mises's Theory and History very highly.) Usually, people ascribe this shift to Popper's influence; but his comments in class showed that this is not the full story. He was very impressed by W.V.O. Quine, whose famous challenge to the analytic-synthetic distinction, if accepted, is usually taken to rule out synthetic a priori truths. Hayek told me, "I regard Quine as one of our most stimulating philosophers." I do not mean to deny Popper's influence, though: it was clear that Hayek held him in high regard. He told me that Popper's The Open Society and Its Enemies gives a convincing account of Plato and Hegel but is probably too hard on Aristotle.

He also, by the way, had a high opinion of Murray Rothbard. When I asked him about America's Great Depression, he said it was an excellent book and gave a convincing interpretation of the Depression. He did not like to speak, though, of a business "cycle," because the term implies that there is a return to the original starting point. This normally does not happen when a depression ends. For the economics of Milton Friedman, he had much less sympathy: he once strongly criticized Friedman's proposal of a negative income tax.

As the story about "cycle" shows, Hayek emphasized precise use of words. Once, when a student used "criteria" as a singular noun, Hayek said that when people said "criteria" when they should have said "criterion" and "phenomena" instead of "phenomenon," it hurt his ears.

He gave some talks on social and cultural evolution, and it was evident that Darwinian evolution was a strong influence on his thought. Though he recommended the work of his friend Ludwig von Bertalanffy on general systems theory, he dismissed entirely Bertalanffy's skepticism about standard evolutionary theory.

The required work for the course was a single paper, due near the end of the course. Hayek gave me some advice on my paper that has been of great help to me in later work. I did a critical review of an article by Ernest Nagel on method in economics. "Remember," Hayek said to me, "point-by-point refutation." In his own critical work, Hayek was not satisfied with a challenge to the main thesis of an opponent. He responded to every argument advanced in the adversary's work. Those who wish to see this method in action should see his famous response to Foster and Catchings, "The 'Paradox' of Saving," in Prices and Production and Other Works (edited by Joseph T. Salerno). It remains only to say that Hayek, despite his ferocity as a critic, was a very easy grader.