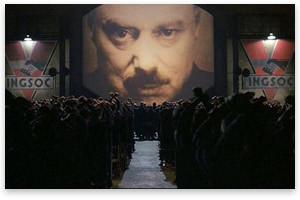 [Original publication date: March 9, 1953. An MP3 audio file of this article, read by Floy Lilley, is available for download.]

One of the most remarkable features of our age is the propensity toward changing the meaning of political terms. A semantic revolution converts the sense traditionally attached to words into its opposite. George Orwell has ingeniously described this tendency in his 1984. The second of the three slogans of Oceania's party says, "Freedom Is Slavery."In the opinion of the "progressive" intellectuals, Orwell's dictum is the talk of a hysteric; nobody, they shout, has ever ventured to utter such a nonsensical proposition.

Unfortunately the facts belie their denial. There prevails in the writings of many contemporary authors the disposition to represent every extension of governmental power and every restriction of the individual's discretion as a measure of liberation, as a step forward on the road to liberty. Carried to its ultimate logical conclusion, this mode of reasoning leads to the inference that socialism, the complete abolition of the individual's faculty to plan his own life and conduct, brings perfect freedom. It was this reasoning that suggested to socialists and Communists the idea of arrogating to themselves the appellation liberal.

Professor Robert L. Hale of Columbia University has just published a voluminous book, Freedom through Law: Public Control of Private Governing Power.1  It is a passionate plea in favor of government control of business and a review of the legislation and the rulings of the courts concerning the subject. As a compilation of legal material such a book may have some merit. But the author aims at more. His ambition is to justify the policy of interventionism from the point of view of the philosophy of law as well as from that of the American constitutional and legal system.

We may pass over the fact that the author entirely fails in this endeavor. For even if he had fully succeeded in proving his point, he would not have advanced any tenable argument in support of the policies he advocates. The question whether the United States should preserve the private-enterprise system or should adopt what is nowadays euphemistically called "direct controls" is not a problem of general philosophy or of jurisprudence. It is a problem of economic policy. It has to be decided according to the effects to be expected from, or already brought about by, the policies concerned. Only economic considerations can clarify such issues.

The case against interventionism is not based on the interpretation of the Constitution. (Incidentally, most of the recent interventionist measures are certainly unconstitutional.) The economists do not raise the question whether or not interventionism is legal or illegal, good or bad, desirable or undesirable. They demonstrate that the various measures of government interference with market phenomena do not produce the results aimed at by the governments resorting to them. These measures rather create a state of affairs which — from the very point of view of the government itself and all the advocates of interventionism — is more undesirable than the previous state of affairs which they were designed to alter. If the government, faced with this inevitable outcome, does not want to repeal its decrees and to return to economic freedom, but goes on with its interventionist policy, it must add to the first decrees more and more decrees until it has regimented every aspect of the citizens' lives, their activities in production as well as the mode of their consumption. Then any kind of freedom — economic or political — disappears, and totalitarianism of the type of the Hitler Zwangswirtschaft emerges. Interventionism is not an economic system that can last. It can not be preserved permanently. It must either be abolished or it must lead step by step to all-around planning by the government, to full socialism, a system in which nobody is free.

State an Apparatus of Coercion

A state or a government is an apparatus of coercion and compulsion. Within the territory that it controls, it prevents all agencies, except those that it expressly authorizes to do so, from resorting to violent action. A government has the power to enforce its commands by beating people into submission or by threatening them with such action. An institution that lacks this power is never called a government. The reasoning that leads Professor Hale to equate every business deal between private citizens with governmental coercion and to call all such transactions the exercise of private governing power runs this way:

Every person has a certain amount of bargaining power on which he depends for his livelihood. Bargaining power is power to exert pressure on those with whom one carries on transactions — in other degree of coercion over other people's liberty, while at the same time his own liberty is subject to some degree of control by others.

The government says to the citizen, Pay taxes or my armed constables will imprison you. The baker says to the prospective customer, If you want me to serve you and to bake bread for you, then you must reward me by doing something for me. In the opinion of Professor Hale there is no difference between the two modes of acting. Both are coercion, both are government of men over men, both are infringements of other people's liberty. The baker coerces the dentist by selling him bread and the dentist coerces the baker by filling the cavities of his teeth. Wherever you look in this worst of all thinkable worlds you discover restrictions of liberties. But fortunately paternal government steps in to salvage liberty. It saves liberty precisely by curtailing it. For, says Professor Hale,

it is a fallacy to assume that every attempt by the state to control and to revise the economic results of bargaining involves a net curtailment of individual liberty. It may or may not do so. If the liberty of those whom it restrains is less vital than the liberty which those persons would themselves restrain, then state intervention may spell a net gain in individual liberty … It becomes necessary at times for the political state to curtail the freedom of powerful groups to dominate.

Some years ago Mrs. X used to prepare the soup for the family meals in her own kitchen. Later she began to buy canned soup manufactured by one of the country's canneries. A clear-headed observer will argue that the lady for some reason considers this mode of supplying her family with soup as preferable to the previous method. Not so Professor Hale. In his eyes coercion is present. The cannery, in manufacturing soup and selling it to Mrs. X, exercises governing power. As the cannery is a private firm, not a government-owned and -operated factory as in Russia, there is something highly immoral and reprehensible in the matter. For it is private governing power. And as everybody agrees that all governing power belongs by right to the government, it is obvious to Professor Hale that the government must curtail this power of the cannery "to dominate" Mrs. X by manufacturing soup for her.

The way in which Professor Hale describes the operation of the market economy is, to say the least, amazing. Thus he declares,

the customer can deny his money to the retailer, and by threatening to deny it can coerce the retailer to furnish him with the goods.

Now, millions of people in this way "threaten" the jewelers of Fifth Avenue; they "threaten to deny their money to them." Yet those "threatened" do not furnish them with bracelets and necklaces. But if a holdup man turns up and threatens the jeweler in his own manner, by brandishing a gun, the outcome is different. It seems therefore that what Professor Hale calls threats and coercion comprehends two entirely different things having entirely different features and consequences. His failure to distinguish these two things from one another would be deplorable in a nontechnical book. In a presumably juridical book it is simply catastrophic.

It would not be necessary to pay much attention to Professor Hale's volume if his mode of arguing were peculiar to him alone. But these views are in fact fashionable nowadays. For instance, in the Yale Review of Spring, 1952, Professor Sutherland of the Harvard Law School in a similar way suggested restriction of "private government." We encounter here a new slogan designed to replace the worn-out labels of the New and Fair Deals. Let us hope that this new catchword will not fool anybody.

This article originally appeared in the Freeman, March 9, 1953.