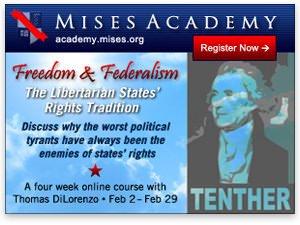 [Thomas DiLorenzo will be teaching Freedom and Federalism: The Libertarian States' Rights Tradition, a 4-week online course for the Mises Academy, February 2 – February 29.]

Americans — and much of the rest of the world — have been deprived of one of the most important means of establishing and maintaining a free society, namely, federalism or states' rights. It is not just an accident that states' rights have either been relegated to the memory hole, or denigrated as a tool of racists and other miscreants. The Jeffersonian states'-rights tradition was — and is — the key to understanding why Thomas Jefferson believed that the best government is that which governs least, and that a limited constitutional government was indeed possible.

What Are "States' Rights"?

The idea of states' rights is most closely associated with the political philosophy of Thomas Jefferson and his political heirs. Jefferson himself never entertained the idea that "states have rights," as some of the less educated critics of the idea have claimed. Of course "states" don't have rights. The essence of Jefferson's idea is that if the people are to be the masters rather than the servants of their own government, then they must have some vehicle with which to control that government. That vehicle, in the Jeffersonian tradition, is political communities organized at the state and local level. That is how the people were to monitor, control, discipline, and even abolish, if need be, their own government.

It was Jefferson, after all, who wrote in the Declaration of Independence that government's just powers arise only from the consent of the people, and that whenever the government becomes abusive of the peoples' rights to life, liberty, and the pursuit of happiness it is the peoples' duty to abolish that government and replace it with another one. And how were the people to achieve this? They were to achieve it just as they did when they adopted the Constitution, through political conventions organized by the states. The states, after all, were considered to be independent nations just as England and France were independent nations. The Declaration of Independence referred to them specifically as "free and independent," independent enough to raise taxes and wage war, just like any other state.

That is why the political heirs of Thomas Jefferson, mid-19th-century Southern Democrats, held statewide political conventions (and popular votes) to decide whether or not they would continue to remain in then voluntary union of the Founding Fathers. Article 7 of the US Constitution explained that the states could join (or not join) the union according to votes taken at state political conventions by representatives of the people (not state legislatures) and, in keeping with the words of the Declaration, they also had a right to vote to secede from the government and create a new one.

Jefferson was not only the author of America's Declaration of Secession from the British Empire; he championed the idea of state nullification of unconstitutional federal laws with his Kentucky Resolutions of 1798, and also believed that the Tenth Amendment to the Constitution was the cornerstone of the entire document. He was a "strict constructionist" who believed that every effort should be made to force the central government to possess only those powers delegated to it in Article 1, Section 8. Delegated to it by the states, that is. All others are reserved to the states, respectively, and to the people under the Tenth Amendment.

States' rights or federalism never meant that state politicians were somehow more moral, wise, or less corrupt than national politicians. The idea was always that

If Massachusetts created a state theocracy, for example, those who did not want to live under the thumb of Puritan theocrats could escape to Virginia or some other state. The idea of states' rights was never meant by the Jeffersonians to create a "laboratory of experimentation" with government interventionism, as modern political scientists have said. That would be treating people as so many experimental rats in a cage, and that is not how Jefferson liked to think of himself.

Secession or the threat of secession was always intended as a possible means of maintaining both the American union and constitutional government. The idea was that the central government would likely only propose constitutional laws if it understood that unconstitutional laws could lead to secession or nullification. Nullification and the threat thereof were intended to have the same effect. That is why the great British historian of liberty, Lord Acton, wrote the following letter to General Robert E. Lee on November 4, 1866, seventeen months after Lee's surrender at Appomattox:

I saw in States' rights the only availing check upon the absolutism of the sovereign will, and secession filled me with hope, not as the destruction but as the redemption of Democracy. The institutions of your Republic [i.e., the Confederate Constitution] have not exercised on the old world the salutary and liberating influence which ought to have belonged to them, by reason of those defects and abuses of principle which the Confederate Constitution was expressly an wisely calculated to remedy. I believed that the example of that great Reform would have blessed all the races of mankind by establishing true freedom purged of the native dangers and disorders of Republics. Therefore I deemed that you were fighting the battles of our liberty, our progress, and our civilization; and I mourn for the stake which was lost at Richmond more deeply than I rejoice over that which was saved at Waterloo.

What Lord Acton is saying here is that he considered it to be a disaster for the entire world that the right of secession was abolished by the war. The 20th century would become the century of consolidated, monopolistic government in Russia, Germany, the United States, and elsewhere, and it was a disaster for humanity. Had the rights of secession and nullification remained in place, and had slavery been abolished peacefully as it had been everywhere else in the world, America would have been a counterexample of decentralized, limited government for the rest of the world.

General Lee understood this. In his December 15, 1866, response to Lord Acton he wrote,

While I have considered the preservation of the constitutional power of the General Government to be the foundation of our peace and safety at home and abroad, I yet believe that the maintenance of the rights and authority reserved to the states and to the people, not only are essential to the adjustment and balance of the general system, but the safeguard to the continuance of a free government. I consider it as the chief source of stability to our political system, whereas the consolidation of the states into one vast republic, sure to be aggressive abroad and despotic at home, will be the certain precursor of that ruin which has overwhelmed all those that have preceded it. (emphasis added)

This is all a part of America's lost history. The advocates of centralization who were the victors in the War to Prevent Southern Independence rewrote the history of America, as the victors in war always do. This is why I am offering a new four-week online course under the Auspices of the Mises Academy entitled Freedom and Federalism: The Libertarian States' Rights Tradition. Classes will meet beginning on Thursday, February 2. The purpose of the course is to introduce students to the libertarian or classical-liberal states'-rights tradition, and to impart to them an understanding of how such historical figures as Thomas Jefferson and Lord Acton believed that that tradition was the key to controlling "the sovereign will" and preventing democracies from turning into despotisms and tyrannies.