The Free Market is now The Austrian 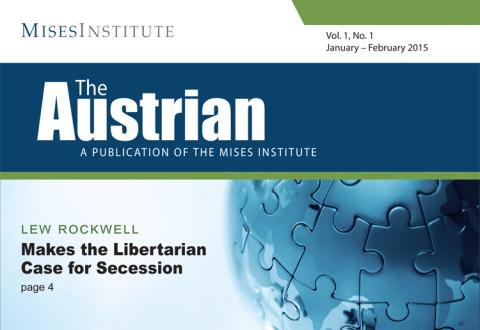 For more than thirty years The Free Market has been the Mises Institute’s flagship monthly publication for our members. Today we introduce The Austrian, a bolder and more robust version of what you’ve known for decades.

“I actually believe in the free market.”

It’s enlightening these days to hear everyone from Obama and Krugman to Putin and Hollande proclaim their belief in the superiority of free markets (invariably adding several qualifying provisos, of course). Even Bono from U2 has had a change of heart. Only Mr. Piketty appears to be clinging (tenuously) to his support for outright central planning.

So it appears we’ve made great strides in the rhetorical battle when it comes to the beauty and power of markets to vastly improve the human condition. We are all free-marketers now, and some of us actually mean it.

Thirty years ago, however, our outspoken support for free markets was radical. And since our beginning the Mises Institute has advocated a free market in everything. But today the term has been diluted through overuse and misuse, as demonstrated by Messrs. Obama and Krugman. It no longer captures the radical and uncompromising nature of the Institute and its members. A name change for The Free Market was in order.

When Mises died in 1973, “Austrian” was an adjective and a loose term of convenience describing the great scholars (and scholarship) of the Austrian school of economics.

Today, thanks to phenomenal growth in the Austrian school, one can simply say, “I’m an Austrian” when speaking in libertarian or academic circles. “Austrian” has become a noun!

Our new moniker, The Austrian, goes to the heart and soul of what we are: an organization dedicated to the brilliant scholarship of Austrian economics. Mises is our touchstone, Rothbard our animating spirit, and the classical liberal tradition our north star.

We will publish The Austrian every other month, and deliver it to your mailbox or email inbox. Each issue will feature provocative articles by cutting edge libertarian and Austrian thinkers, conversational interviews with leading business people and intellectual entrepreneurs, reviews by David Gordon, and cultural commentary by guest writers. You won’t find this kind of radical, politically incorrect content anywhere else.

We hope you enjoy The Austrian, and we’re grateful to have you as a member. Please let us know what you think (via contact@mises.org), and encourage your friends and family to join the Mises Institute.