The Free Lunch Is Over 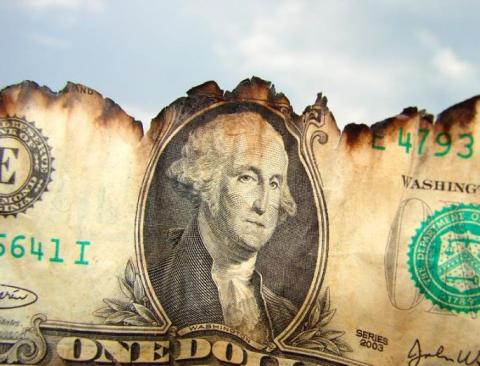 If there is one overriding economic myth that plagues us today it is the notion that society can do collectively what we cannot do individually: get rich by living today at the expense of tomorrow. It is the doctrine of the political class, professional economists, and central bankers. It is monetary and fiscal hedonism masquerading as technical analysis. And, it leads to fiscal default. It is arguably the biggest untold story of our time, but you won’t hear about it from Hillary or Bernie or Donald.

Part of the problem lies in the fact that the cumulative impact of bad policies will in most cases be felt only many years down the line. Murray Rothbard pointed out when this is the case, voters will support destructive policies. The idea persists that we really can live at someone else’s expense. At least for now.

This is what the Fed has been doing with all of its “extraordinary” monetary policy since 2008. But even the Fed admits this comes with big risks for future fiscal solvency. In a November 2010 speech, St. Louis Fed President James Bullard said: “The [FOMC] has often stated its intention to return the Fed balance sheet to normal, pre-crisis levels over time. Once that occurs, the Treasury will be left with just as much debt held by the public as before the Fed took any of these actions.”

The problem is, the Fed has yet to figure out how it will return things to “pre-crisis” levels. In other words, the end of the Fed’s experiment in massive debt and easy money will come “some day.” But definitely not today.

I’ll leave it to you to decide if extraordinary monetary policy is really the new normal. It’s hard to conceive of an event where the Fed would reverse this trend or significantly raise interest rates.

There still appears to be no political will at the Fed or anywhere else to forgo consumption today for the sake of fiscal solvency later.

The Lost Art of Investing in the Future

Looking around this beautiful venue, which often hosts symphonies, we see immediately that it was built by people who wanted to create something lasting — something that would not only survive their lifetimes, but that would provide beauty and lasting enjoyment for future generations.

They broke ground on this building 100 years ago; none of the individuals who built it are alive today. It served for decades as a Christian Science church.

But in a sense the individuals who built it live on through their work, which surrounds us here: through the art glass Tiffany-style lighting, through the terra cotta on the sides of the building, through the thick masonry designed to produce warm acoustics. They persevered for 6 years to complete it — and while they could not have foreseen what kind of events or people the building would host a century later, undoubtedly they knew it was built to last and hoped it would remain standing a long time as Seattle grew up around it.

They built something lasting for an uncertain future.

All healthy societies do this. The notion of being concerned with things beyond one’s lifetime is innately human. Humans are hardwired to build societies, and the most ambitious humans have always sought to build lasting monuments and modes of living. That’s not possible unless people work toward a future they will not enjoy themselves.

This was especially true for our ancient primitive ancestors, who lived very short and difficult lives. We can imagine how much they wanted to have lasting forms of sustenance: food, water, clothing, shelter — instead of having to produce that sustenance day after day.

In fact, this trait perhaps more than any other is the hallmark of civilization. We can call it many things, but we might just say healthy societies create capital. They consume less than they produce. This capital accumulation creates an upward spiral that increases investment and productivity, making the future richer and brighter. Capital accumulation made it possible for human populations to develop beyond subsistence misery. It made the agricultural, industrial, and digital revolutions possible.

Economists talk about savings in the context of time preference, the preference that people have for current consumption over future consumption. People with high time preferences want everything today, no matter the cost, whether buying with credit or simply enjoying the empty pleasure of idleness over productive activity.

People with low time preferences are the opposite: they’d rather forgo some pleasure or purchase today to build for the future, whether their own or their offspring’s. And it’s not just about the future of the family or tribe: society benefits across the board, through economic, cultural, and philanthropic development.

Of course time preference is not only a matter of sociological study, but also a fundamental concept in economics.

In the 1800s the French classical economist Jean-Baptiste Say gave us his law of markets, a law that could be reduced to the proposition that production precedes consumption. We have to produce before we consume, because while humans always have infinite wants  — i.e., demand — real-world scarcity means that we first have to produce economic goods before we can consume them. The only other choice is a return to that subsistence life our ancestors escaped thousands of years ago.

Mises posited that from the study of human action itself we could derive the assumption that all other things being equal, individuals prefer to achieve an end sooner rather than later. This is why we’d rather buy our dream house at age 40 than 90. We can understand this preference by deductive reasoning.  The question is how bad we want that house at 40, and what using consuming capital or incurring debt to buy it might mean for our life at 90.

Professor Hans Hoppe states that low time preference, the willingness to accumulate goods for an uncertain future, “initiates the process of civilization” — a positive feedback loop in which developing societies accumulate more and more capital, which leads to greater productivity, which leads to longer lifespans and greater concern for the future.

Professor Guido Hülsmann, in his great book The Ethics of Money Production, addresses the damaging cultural and moral effects of using monetary policy to encourage high time preference via inflation and cheap credit. By debasing money, the political class and its bankers not only hurt the economy, but also grow government, make wars more likely, and create moral hazards that encourage bad behavior.

The Rise of Monetary and Fiscal Hedonism

It seems self-evident that capital accumulation and low time preferences are healthy, virtuous, and necessary elements of an advanced economy and society. So we should not be surprised that the two most powerful forces in the modern world — central governments and central banks — work tirelessly to thwart both. And democracy, so-called, is at the heart of their experiment.

As the aforementioned Dr. Hoppe explains, democracy turns the political class into high time preference plunderers: without any vested hereditary interest in the future of a nation, elected politicians have every incentive to consume the nation’s current capital via taxes and future capital via debt. Why shouldn’t a politician win votes today, by supporting popular spending measures, when the consequences won’t be felt until long after he’s out of office? Buy now, pay later is an inherent feature of any democratic political system.

But the moral hazards created by such a system in America are enormous, and we’re not just talking about those living on food stamps and welfare because it’s only marginally worse than working a low-paying job.

We’re talking about huge middle-class constituencies for entitlement programs like Social Security and Medicare. Why buy a Hyundai and vacation in Florida when you can buy a Mercedes and vacation in Europe? How many economic decisions are subtly influenced by the knowledge that at least a portion of one’s retirement costs will be borne by others?

As for the Fed, we could spend all weekend studying how it distorts prices across the board, rigs equity and housing markets, misallocates resources and alters the structure of production, fools entrepreneurs, and punishes savers.

As Guido Hülsmann describes, monetary debasement brings about cultural debasement and ultimately personal debasement. It’s not a new concept, but rather a problem that existed in ancient and feudal times just as it does today. It infects every aspect of our society: not just our financial lives, but civil society and our personal relationships as well. Cheap credit, the drug pushed by central bankers, makes us prefer the saccharine pleasures of consumption to the lasting satisfaction of productive achievement. It makes us buy houses that are too big, cars that are too elaborate, and college educations that are too expensive.

It makes us worse people!

In sum, we might say that Congress and the Fed are co-conspirators in a plot to have us live for today instead of building for tomorrow.

It’s not hyperbole to say that the political and banking classes have become enemies of civilization. They’ve sold us a mix of fiscal hedonism and monetary hedonism that threatens to upend the arc of human history.

Our Biggest Challenge Lies in Changing Our Mindset

Remember, our economic future is unwritten. The US economy has very serious structural problems, particularly with respect to debt, the dollar, and entitlements.

But our biggest challenge is mindset. There is no reason on paper that America cannot be a great nation.

Despite all the problems with American schools, we still have one of the most educated workforces in the world. We have abundant and sparsely populated land. In fact, we have more arable land than any other nation — about 17 percent of all US acreage can be farmed. We have 500 million acres of timber. We have two huge coastlines, with access to both eastern and western markets. And we have huge amounts of cheap energy in the form of oil and natural gas.

Our problems are of our own making, primarily caused by lousy voters, high time preferences, and economic hedonism. It’s been a great party, ladies and gentlemen. Good luck electing someone who’s serious about the hangover.