The Founding Father of Crony Capitalism 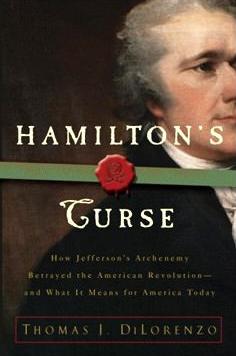 As soon as the federal government announced its trillion-dollar bailout (for starters) of Wall Street plutocrats, defenders of the bailout pulled out what they apparently believed was their secret weapon: the myth of Alexander Hamilton as the alleged inventor of American capitalism. Hamilton, they said, would approve of the bailout. Case closed. How could anyone dispute "the architect of the American economy"?

Forbes.com immediately published an article entitled "Alexander Hamilton versus Ron Paul" to make the point that libertarian critiques of the bailout should be dismissed, since Hamilton was such a great statesman compared to Congressman Paul and his supporters. The Wall Street Journal Online published a piece by business historian John Steele Gordon in which he argued that our real problem is that central banking is not centralized enough; called for a financial-market dictator/regulator; supported the bailout; and, most importantly, blamed the current economic crisis on … Thomas Jefferson! Jefferson opposed America's first central bank, Hamilton's bank of the United States, and was a hard-money advocate. It is this kind of libertarian, free-market thinking, said Gordon, that is the cause of the current crisis.

What all this frantic Hamilton idolatry demonstrates is how the myth of Alexander Hamilton is the ideological cornerstone of the American system of crony capitalism financed by a huge public debt and legalized counterfeiting through central banking. It is this system that is the real cause of the current economic crisis — contrary to the false proclamations issued by Forbes.com and the Wall Street Journal.

We live in "Hamilton's republic," as the writer Michael Lind has proudly stated. Americans may like to quote Jefferson, George Will once wrote, but we live in Hamilton's country. This is true, but it is not the blessing that people like Lind, Will, and others proclaim. Just the opposite is true, as I argue in my new book, Hamilton's Curse: How Jefferson's Archenemy Betrayed the American Revolution — And What It Means for America Today.

Hamilton was the intellectual leader of the group of men at the time of the founding who wanted to import the system of British mercantilism and imperialistic government to America. As long as they were on the paying side of British mercantilism and imperialism, they opposed it and even fought a revolution against it. But being on the collecting side was altogether different. It's good to be the king, as Mel Brooks might say.

It was Hamilton who coined the phrase "The American System" to describe his economic policy of corporate welfare, protectionist tariffs, central banking, and a large public debt, even though his political descendants, the Whig Party of Henry Clay, popularized the slogan. He was not well schooled in the economics of his day, as is argued by such writers as John Steele Gordon. Unlike Jefferson, who had read, understood, and supported the free-market economic ideas of Adam Smith, David Ricardo, John Baptiste Say (whom Jefferson invited to join the faculty of the University of Virginia), Richard Cantillon, and Turgot (a bust of whom still sits in the entrance to Monticello), Hamilton either ignored or was completely unaware of these ideas. Instead, he repeated the mercantilist myths and superstitions that had been concocted by apologists for the British mercantilist state, such as Sir James Steuart.

Hamilton championed the cause of a large public debt — which he called "a public blessing" — not to establish the credit of the US government or to finance any particular public works projects but for the Machiavellian idea of tying the interests of the more affluent to the state: being government bondholders, they would, he believed, then support all of his grandiose plans for heavy taxation and a government much larger than what was called for in the Constitution. He was right. They, along with Wall Street investment bankers who have marketed the government's bonds, have always provided effective political support for bigger government and higher taxes. That is why Wall Street investment bankers were first in line for a bailout, administered by one of their fellow investment bankers, Treasury Secretary Paulson.

Hamilton argued for a large standing army not because he feared an invasion by France or England, but because he understood that the European monarchs had used such armies to intimidate their own citizens when it came to tax collection. Evidence of this is the fact that Hamilton personally led some 15,000 conscripts into Western Pennsylvania (with George Washington) to attempt to quell the famous Whiskey Rebellion. He was eventually put in charge of the entire expedition, and rounded up two dozen tax protesters, every one of whom he wanted to hang. They were all pardoned by George Washington, however, to Hamilton's everlasting regret.

In a publication entitled "A History of Central Banking in America" the Fed proudly labels Hamilton as its founding father, boasting that he even spoke just like a contemporary Fed chairman. The First Bank of the United States, which was opposed by Jefferson and Madison, created 72 percent inflation in its first five years of operation, as Murray Rothbard wrote in A History of Money and Banking in the United States. It was not rechartered in 1811, but was resurrected by Congress in 1817, after which it created America's first boom-and-bust cycle, which led to the Panic of 1819, the title of another of Rothbard's great works on American economic history.

After years of generating political corruption and economic instability, Hamilton's bank finally came to an end by the early 1840s, thanks to President Andrew Jackson. This led to the twenty-year "free banking" era. Hamiltonian central banking was resurrected once again in the 1860s with the National Currency Acts. This is an important reason why some historians have labeled the postwar decades as a period of "Hamiltonian hegemony."

When Anna Schwartz, Michael Bordo, and Peter Rappaport evaluated this precursor to the Fed in an academic publication, they concluded that it was characterized by "monetary and cyclical instability, four banking panics, frequent stock market crashes, and other financial disturbances" (see their paper in Claudia Goldin, ed., Strategic Factors in Nineteenth-Century Economic Growth). Naturally, the government's response to all of this economic panic and instability caused by centralized banking was to create an even more centralized banking system with the Federal Reserve Act.

Hamilton is perhaps best known among economists for his Report on Manufactures. In his 1905 biography of Hamilton, William Graham Sumner wrote that Hamilton's report advocated "the old system of mercantilism of the English school, turned around and adjusted to the situation of the United States." Thomas Jefferson also wrote that Hamilton's "schemes" for protectionism, corporate welfare, and central banking were "the means by which the corrupt British system of government could be introduced into the United States." They were right.

Hamilton's reputation as having had great expertise in economics and finance has been greatly exaggerated, wrote Sumner, who also wrote that Hamilton's economic thinking was marred by "confusion and contradiction" and that Hamilton was "befogged in the mists of mercantilism." Unfortunately for us, all of Hamilton's bad ideas "proved a welcome arsenal to the politicians" who succeeded him, noted Sumner.

At the constitutional convention Hamilton proposed a permanent president who would appoint all the governors of the states and would have veto power over all state legislation. His opponents correctly interpreted this as advocating a monarchy and, worse yet, a monarchy based on mercantilism. The reason for consolidating all political power first in the central government, and then in the hands of one man, the permanent president, was so that an American mercantilist empire could be centrally planned and controlled without any dissenters, such as tax protestors or free traders who resided in the various states. Hamilton (and his political heirs) understood that forced national uniformity is the only way in which such a central-planning scheme could work. The socialists of the 20th century understood this as well.

Hamiltonian mercantilism is essentially the economic and political system that Americans have lived under for several generations now: a king-like president who rules through "executive orders" and disregards any and all constitutional constraints on his powers; state governments that are mere puppets of the central government; corporate welfare run amok, especially in light of the most recent outrage, the Wall Street Plutocrat Bailout Bill; a $10 trillion national debt ($70 trillion if one counts the government's unfunded liabilities); a perpetual boom-and-bust cycle caused by the Wizard of Oz–like central planners at the Fed; constant military aggression around the world that only seems to benefit defense contractors and other beneficiaries of the warfare state; and more than half of the population bribed with subsidies of every kind imaginable to support the never-ending growth of the state. This is Hamilton's curse on America — a curse that must be exorcized if there is to be any hope of resurrecting American freedom and prosperity.