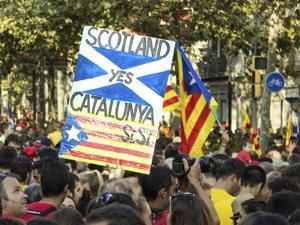 Government authorities in the UK have declared that the “Yes” campaign for secession has failed by a margin of approximately 55 percent to 45 percent. Yet, even without a majority vote for secession, the campaign for separation from the United Kingdom has already provided numerous insights into the future of secession movements and those who defend the status quo.

Global elite institutions and individuals including Goldman Sachs, Alan Greenspan, David Cameron and several major banks pulled out all the stops to sow fear about independence as much as possible. Global bankers vowed to punish Scotland, declaring they would move out of Scotland if independence were declared.

According to one report:

A Deutsche Bank report compared it to the decision to return to the gold standard in the 1920s, and said it might spark a rerun of the Great Depression, at least north of the border.

When it comes to predictions of economic doom, it doesn’t get much more hysterical than that. Except that it does. David Cameron nearly burst into tears begging the Scots not to vote for independence.

The elite onslaught against secession employed at least two strategies. The first involved threats and “for your own good” lectures. Things will “not work out well” for Scotland in case of secession, intoned Robert Zoellick of the World Bank. John McCain implied that Scottish independence would be good for terrorists. The second strategy involved pleading and begging, which, of course, betrayed how truly fearful the West’s ruling class is of secession.

In addition to Cameron’s histrionics based on nostalgia and maudlin appeals to not break “this family apart,” Cameron attempted (apparently successfully) to bribe the Scottish voters with numerous promises of more money, more autonomy, and more power within the UK.

The threats that focused on the future of the Scottish monetary system are particularly telling. The very last thing that governments in London, Brussels, or Washington, DC want to see is an established Western country secede from a monetary system and join another in an orderly fashion. Political secession is bad enough, and is a thorn in the side of the EU which clearly hopes to establish itself someday as a perpetual union with no escape option. A successful withdrawal from a major global currency, even if to join the EMU later, would imply that countries have monetary options other than being absorbed wholesale (and permanently) by the EMU.

While the UK elites were desperate to see the Scotland referendum fail, few argued that the Scots had no right to vote on the matter. Some argued that all of the UK should vote on it, but most observers appeared to simply accept that the Scots were entitled to vote by themselves on Scotland’s status in the UK.

This is bad news for many American and European regimes where traditions of democracy ostensibly run strong, but are manipulated to favor centralization. The United States government, for example, clings to the idea that no secession could possibly take place unless approved by the central government, and most Americans will dutifully denounce any attempt at a secessionist vote as treason. But in Europe, the mere existence of the Scotland referendum calls into question the legitimacy of efforts by central governments to ignore or prohibit local votes on independence. The Italian government has practically refused to even acknowledge the existence of the Venetian referendum, and the Spanish government in Madrid has already reiterated that it will ignore the results of the upcoming Catalonian vote.

It will not go unnoticed that the people who ignore such democratic outcomes when they endanger the elite’s status quo are the same people who extol the virtues of democracy when it suits their centralizing purposes, or when used to justify foreign wars.

Those regimes that deny a vote or which refuse to recognize votes to secede will continue to appear more and more retrograde as time goes on, and much of this will be due to the nearly unchallenged Scottish prerogative to conduct local votes on secession.

Some regimes may attempt to get around this by requiring nation-wide votes on secession. So, in the case of Venice, it is much easier to contemplate a situation in which the government in Rome allowed all of Italy to vote on whether or not Venice could secede. Such a vote would be safe from the central regime’s perspective since it would be highly unlikely to succeed under such conditions. Southern Italians benefit from tax revenues extracted from the Veneto region. Catalan, as well, is one of the more productive regions in Spain, so a nationwide vote would almost certainly lean toward continuing to exploit Catalonia for the benefit of less productive Spaniards.

Some observers have insisted that the relationship between such regions and the central governments in question are like “marriages” and that secession is like a “divorce.” A much better analogy, of course, is of a battered spouse seeking to flee the relationship for a safe house. Giving the full national electorate a vote is like giving an abusive spouse the power to veto any attempt at divorce.

It’s interesting to note, however, that Scotland is not in the same position as Veneto or Catalonia in that it is not a wealthy area of the United Kingdom. Indeed, from the point of view of budgets and tax revenues (ignoring the monetary dimension), England would not see much negative impact from Scotland’s departure. Had things been different, we might not have seen the same accepting attitude toward a referendum. Nonetheless, the precedent has been set.

Lesson 3: American Ideas about Secession Are Unsophisticated and Parochial

For a great many Americans, the concept of secession is meaningless outside the context of the American Civil War. Since it is conveniently never mentioned that the American Revolution was the result of American secession from the British Empire, Americans know virtually nothing of any other secession movement in history in any other context except the Confederacy and slavery. Some Americans of a certain age associate secession with the Yugoslav Wars of the 1990s, wrongly thinking that war to be caused by secession and not by decades of centralizing communist rule.

The Scottish question has made it clear that in the rest of the world, most educated human beings understand that secession has been used in a wide variety of historical and political contexts. Obviously, slavery has nothing at all to do with the secession movements in Quebec, Scotland, Veneto, or Catalonia.

Moreover, Americans in the typical fashion of authoritarians who justify any unjust state of affairs by dogmatically repeating the phrase “it’s the law” act as if the matter of regional autonomy and independence was settled once and for all in 1865 by the Civil War. Presumably, for these people, the matter has been settled until the End of Time, because some other people — all of whom are now long-dead — fought a war about it. It requires truly awe-inspiring levels of philistinism to think that something political is forever settled because of something someone else did a century and half ago. Among more rational and reasonable groups of humans, however, it is recognized that political conditions and allegiances change constantly.

At the same time, the pro-secessionists in America who dogmatically invoke the United States constitution of 1787 as proof of secession’s legality, will continue to fail to win converts. The constitution as envisioned by those who wrote it has been dead and buried for at least a century. The old interpretation is far too limiting in any case, and only applies to full US states, and not to portions of states.

Lesson 4: Secession is a good way to bargain

As we learned from the Scotland experience, centralizers fear secession to the point where they’re willing to throw a lot of bones to the secessionists. Of course, in the case of Scotland, which is a net tax-receiver region, these promises involved a lot of government welfare. In the case of Veneto, for example, things would be different. In any case, threatening secession is a useful tactic in obtaining additional autonomy. Moreover, it is always helpful to force a central government to submit to a referendum on its legitimacy. This should not be done in a one-off election as the Scots have done, but as a regular feature of the political process.

Ultimately, however, what really matters to the regime is that the ability to inflate the money supply and control the financial system. Politicians from the central government will be willing to part with many powers, but the power to inflate and control the banks will never be given up lightly.

As predicted by Martin Van Creveld and a host of other observers of trends in state legitimacy, the state’s status as the central fact in the political order of the world continues to decline with smaller national groups and economic regions breaking up the old order in favor of both local autonomy and international alliances. The Scottish secession effort is simply one of many recent examples. The short-term defeat of the referendum will do little to alter this trend.

In addition, the economic realities of the modern world with constantly-moving capital and labor will continue to undermine the modern nation-state which has been largely built on the idea of economic nationalism and the myth that national economic self-sufficiency can be obtained.

The proliferation of trade among nations with huge national markets, labor forces, and a willingness to trade internationally has broken down the old national claims that only the nation-state can provide the markets, coercive power, and international clout necessary for economic growth. In fact, the Scots, the Venetians, and the Catalonians see access to international markets as something that is quite attainable without the added baggage of the central state to which they are presently beholden. Does Venice need Rome to trade with China? It’s unlikely.

As Peter St. Onge has pointed out, small nations do quite well when it comes to economic performance, and smallness is hardly a liability. This assertion that bigger is better was always easily disprovable, but remained popular for centuries. The success of the Scottish secessionist claims that Scotland could indeed compete internationally has shown that the dominance of the old myth continues to break down.

Some British newspapers have declared that “the dream is over” for Scottish independence. That seems hardly likely, unless by “over,” the newspapers mean “over for the next few years.” Europe-wide, the drive for more regional independence and autonomy will only continue to grow as economies stagnate, and as elites from Brussels or Rome or Madrid continue to maintain that they know best. Eventually, the promises of the centralizers will fall on very deaf ears.