Fires of the Feds: How the Government Has Destroyed Forests | Mises Institute
Skip to main content

GET NEWS AND ARTICLES IN YOUR INBOXPrint
A
A
Home | Mises Library | Fires of the Feds: How the Government Has Destroyed Forests

Fires of the Feds: How the Government Has Destroyed Forests 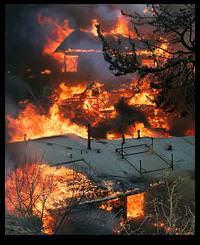 Tags The EnvironmentOther Schools of Thought

As the wildfires in California and elsewhere burn forests, homes, and businesses, and as a Katrina-sized evacuation continues, environmentalists and the media are making new claims: these disasters are the results of global warming.

According to a recent "60 Minutes" broadcast and new claims on CNN, global warming is causing these newest disasters, and if we wish to have fewer fires in the future, we need to "change our lifestyles" now.

But in the years to come, they may become ordinary.

Scientists have already tied increased frequency and intensity of wildfires to the changing climate, and scientists are confident that the conditions that will be brought on by global warming will only make conditions more ripe for wildfire.

At the top of the next hour … the big picture. These fires are really a piece of it. Fire, drought, global warming, climate change, deforestation, it is all connected, tonight, 9:00 p.m. Eastern… "Planet in Peril" starts in just 30 minutes.

There are even scientists providing the "fig leaf" for this new theory of forest fires, like this recent article from Science:

Western United States forest wildfire activity is widely thought to have increased in recent decades, yet neither the extent of recent changes nor the degree to which climate may be driving regional changes in wildfire has been systematically documented. Much of the public and scientific discussion of changes in western United States wildfire has focused instead on the effects of 19th- and 20th-century land-use history. We compiled a comprehensive database of large wildfires in western United States forests since 1970 and compared it with hydroclimatic and land-surface data. Here, we show that large wildfire activity increased suddenly and markedly in the mid-1980s, with higher large-wildfire frequency, longer wildfire durations, and longer wildfire seasons. The greatest increases occurred in mid-elevation, Northern Rockies forests, where land-use histories have relatively little effect on fire risks and are strongly associated with increased spring and summer temperatures and an earlier spring snowmelt.

The translation is this: government forest management has been just fine; global warming is the cause of the modern forest fires that are consuming huge acreage in the American West. Perhaps it is convenient that government-paid scientists tell us that the real problem is private enterprise producing all that carbon dioxide that is supposedly killing us all.

There is this little problem, however, of government management of western forests for more than a century that has given us a situation that has inevitably led to what we are now seeing. A recent paper by Alison Berry of the Property and Environment Research Center points to a much different — but familiar — culprit, the federal government.

For most of the 20th century, U.S. federal fire policy focused on suppressing all fires on national forests. The goal was to protect timber resources and rural communities, but this policy ignored the ecological importance of fire. North American forests have evolved with fire for thousands of years. Fire returns nutrients to soils, encourages growth of older fire-resistant trees, and promotes establishment of seedlings.

Decades of fire exclusion have produced uncharacteristically dense forests in many areas. Some forests, which previously burned lightly every 15-30 years, are now choked with vegetation. If ignited, these forests erupt into conflagrations of much higher intensity than historic levels. Grasses, shrubs, and saplings in the understory now form a fuel ladder, through which flames can climb to the forest canopy, killing entire forest stands.

The fire problem is exacerbated by decreasing federal timber harvests since the late 1980s. In the absence of fire, and with reduced timber harvests and thinning, numerous small diameter trees have proliferated. Stressed trees compete for scarce water, sunlight, and growing space.

To understand how we came to this place, we have to remember that we are dealing with old political legacies. First, the Louisiana Purchase of 1803 placed all new western lands in the hands of the federal government. Even today, the government owns more than half of all western lands.

Second, the presidency of Theodore Roosevelt gave us more than just belligerence and anti-business rhetoric; it also gave us socialistic government land policies. Roosevelt was strongly influenced by Gifford Pinchot, a Progressive who held to the view that the state would be a better manager of lands than private enterprise. According to Wikipedia:

Pinchot sought to turn public land policy from one that dispersed resources to private holdings to one that maintained federal ownership and management of public land. He was a Progressive who strongly believed in the Efficiency Movement. The most economically efficient use of natural resources was his goal; waste was his great enemy. His successes, in part, were grounded in the personal networks that he started developing as a student at Yale and continuing through his career. His personal involvement in the recruitment process led to high esprit de corps in the Forest Service and allowed him to avoid partisan political patronage. Pinchot capitalized on his professional expertise to gain adherents in an age when professionalism and science were greatly valued. He made it a high priority to professionalize the Forest Service; to that end he helped found the Yale School of Forestry as a source of highly trained men.

At the time, loggers were clear cutting large expanses of private forests, and some conservationists expressed alarm, fearing that all US forests could disappear soon. (Like so many other dire predictions, this one had no basis in fact, but was nonetheless a useful rhetorical tool to spread fear among the public, and to empower the state.)

In establishing the US Forest Service, the Roosevelt Administration sought to run a course between outright preservationism as advocated by John Muir, and the movement to sell government lands to private owners, including timber companies. Instead, the government emphasized its own "expertise" against the "short-term" interests of the private interests, and that meant establishing its own policies. Writes Berry:

Also, the Forest Service needed an uncomplicated message with respect to fire in the woods. It would not serve the agency to attempt to educate the public on the differences between appropriate and inappropriate uses of fire; "propaganda does not thrive on close distinctions"…. Thus, the Forest Service adopted an unequivocal anti-fire position. Later, Smokey Bear's anti-fire message — "only you can prevent forest fire" — would become one of the most effective advertising campaigns in history.

This form of management was consistent with the "Efficiency Movement," in which, according to Wikipedia,

Adherents argued that all aspects of the economy, society and government were riddled with waste and inefficiency. Everything would be better if experts identified the problems and fixed them. The result was strong support for building research universities and schools of business and engineering, municipal research agencies, as well as reform of hospitals and medical schools. Perhaps the best known leader was engineer Frederick Winslow Taylor, who proclaimed there was always "one best way" to fix a problem.

Simply put, the state knew best. During much of the 20th century, government forests were "managed" mostly to serve timber interests, and often engaged in outright policies of subsidizing logging firms. While the lumber industry thrived under those conditions, there were two problems. First, there was the issue of economic calculation in which the value of things depended as much on the political whims of Congress and the executive branch as the value that such resources would have in a free market.

Second, and more important to the present-day situation, the politics of forest management and fire suppression underwent important changes. While the Forest Service temporarily suspended its "Smokey the Bear" policy, a spate of huge wildfires in 1988, including the conflagration at Yellowstone National Park in which a "let it burn" policy was in effect, led to a huge public (or more specifically, political) outcry, so the policy was abandoned and Congress once again demanded fire suppression.

During the late 1980s, and especially during the Bush I and Clinton administrations, the government began to aggressively push the Endangered Species Act as a way to "preserve" western forests. Doing an about-face from its policies of permitting lumber firms from logging western forests, the policies were changed to "leave the forests absolutely alone," a policy that changed the character of the forests.

For one thing, no logging meant that trees would grow more closely together, making forests so dense that it became inevitable that once-routine fires would turn into conflagrations. While these policies were popular with environmentalists, they were disastrous for people who once depended on logging for a livelihood. (Let me also point out that many of the anti-logging and anti-mining directives of the Clinton Administration had the effect of impoverishing those counties that had the effrontery of voting for Clinton's political opponents in presidential elections. Whether this was by coincidence or by design is left up to the reader to decide.)

But while the loggers moved out, the millionaires moved in. Wealthy people who wanted to get away from the crowded West Coast cities built new homes in areas adjacent to national forests. However, environmentalist-dominated governments refused permission to these homeowners to clear land near their homes, which meant that if the nearby forests caught on fire, their homes would almost certainly burn down. Application of the Endangered Species Act to prevent homeowners from removing nearby natural fire hazards also helped to ensure that new homes would be vulnerable to fires.

This is especially true in the coastal mountains of Southern California, where the latest spate of fires have occurred. People have built their "dream homes" in the cooler and more scenic higher elevations, hoping that the danger of fire would remain only a danger and not reality. State and federal policies, citing the Endangered Species Act, have specifically prohibited individual landowners from protecting their own homes and property by changing the nearby landscape to lesson fire dangers.

Fires are natural in that they have always occurred on earth, and will continue to occur. The real problem with the current fires, however, is government. Governments — in the name of "scientific" and "ecological" management — have grossly mismanaged the natural environment. Environmental policy has operated on the assumption — as so eloquently stated by Lew Rockwell — that "private ownership is the enemy." He writes that environmentalists believe:

Nature is an end in itself. So it must be owned publicly, that is, by the state. The state, in its management of this land, must not do anything to it. There must not be controlled burning, brush clearing, clear cutting, or even tourism. We can admire it from afar, but the work of human hands must never intervene.

Indeed, we see the handiwork of such policies: utter destruction of human and animal habitat.

Those endangered species that the law was supposed to protect are swallowed up along with the million-dollar houses that environmentalists hate. So much for the state that "protects" nature. In fact, government has dealt with the natural environment in much the same way that the US Armed Forces dealt with Vietnam: they have destroyed it in order to "save" it.