After the stock market collapse of 2008 and a decline of 3.4 percent for U.S. GDP in 2009, investors rushed to stash funds in emerging markets (EM) where economies were growing at a 3.1 percent annual rate. But the US stock market fell in January of this year largely due to financial trouble in emerging markets. The economies of EM nations, such as, Brazil, Russia, India, Turkey, Thailand, and China, have deteriorated in part because of the withdrawal of US dollar investments from them. Here is a chart from the Institute for International Finance (IIF)1 showing the capital flows to EM nations: 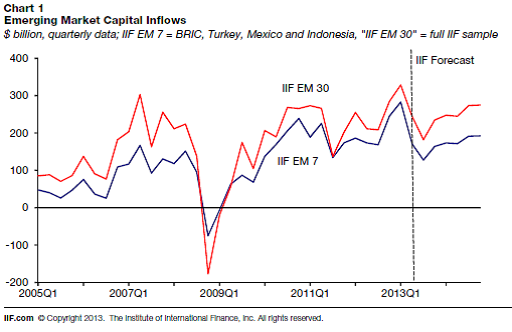 This dynamic confirms the effects of monetary policy as described by the ABCT, the Austrian business cycle theory. The ABCT states that inflationary monetary policies, such as those of the Fed for the past five years, will cause an unsustainable boom as new money pours into the economy and stimulates demand for consumer goods and capital goods, increasing prices and the relative price of capital goods. Usually we think of the ABCT in terms of a single nation, but the EM problems demonstrate that it has international implications as well, especially in a world of increasing trade integration and a currency that other countries use for trade and their banks keep for reserves, such as the US dollar and the Euro.

Mises wrote about the international effects of banks creating more credit money than the domestic population wants to hold:

The role money plays in international trade is not different from that which it plays in domestic trade. Money is no less a medium of exchange in foreign trade than it is in domestic trade. Both in domestic trade and in international trade purchases and sales result in a more than passing change in the cash holdings of individuals and firms only if people are purposely intent upon increasing or restricting the size of their cash holdings. A surplus of money flows into a country only when its residents are more eager to increase their cash holdings than are the foreigners. An outflow of money occurs only if the residents are more eager to reduce their cash holdings than are the foreigners. A transfer of money from one country into another country which is not compensated by a transfer in the opposite direction is never the unintended result of international trade transactions. It is always the outcome of intended changes in the cash holdings of the residents. Just as wheat is exported only if a country's residents want to export a surplus of wheat, so money is exported only if the residents want to export a sum of money which they consider as a surplus.2

What Mises wrote is backward to what mainstream economics and the financial media teach: trade in goods happen first then money follows to square the balances. While Mises wrote about international trade, the same principle applies to international investing. Just as consumers will buy imported goods (export money) if the Fed creates more money than US citizens want to hold, investors will “import” investment opportunities (export money for investment) if the Fed creates more new money than investors want to hold. As a result, the Fed exports its unsustainable boom, often to emerging market countries. That is one reason that the Fed monetary pump has not generated the higher price inflation in the US that the mainstream economists would like.

The export of US investment dollars to EM countries caused a boom in those economies, but the threat of reduced credit expansion by the Fed has brought turmoil. Of course, the Fed had done nothing but nip at the massive bond purchases by cutting back ten of 80 billion dollars in purchases per month. The Fed advertises that it will keep interest rates near zero indefinitely. That means that money flowing to emerging markets may increase in the future as the IIF forecasts. Eventually, the Fed will be forced to raise interest rates and at that time EM nations must pay the price. As Mises wrote:

One of the main objectives of currency devaluation — whether large-scale or small-scale — is ... to rearrange foreign trade conditions. These effects upon foreign trade make it impossible for a small nation to take its own course in currency manipulation irrespective of what those countries are doing with whom its trade relations are closest. Such nations are forced to follow in the wake of a foreign country’s monetary policies.

The emerging market situation reflects another aspect of the ABCT: most emerging market nations export commodities such as metals, food, coal, and oil. In the Austrian taxonomy, they produce higher order goods, consumer goods being the lower order. In another analogy, commodities are at the headwaters of the stream of production and flow through many transformations before becoming consumer goods. Commodities are much more sensitive to changes in the money supply because producing them requires capital intensive processes. Production is much more volatile than consumer goods.

A simplified taxonomy of the worldwide structure of production might categorize the US, Europe, and Japan as producers of capital goods intermediate between the higher order raw material producers of EM nations and the consumer goods producers such as China. This categorization is not clearly defined because most nations have several of the stages of production. Nevertheless, increasing integration has achieved a degree of international specialization in the capital structure. China tends to be a consumer goods producer while the US imports many consumer goods and raw materials for transformation into intermediate capital goods, such as aircraft, electrical generating equipment, and cars.

Internationally, the ABCT might work something like this: the Fed expands credit, and thereby the money supply, during a recession in order to stimulate domestic aggregate demand. But it creates more money than US citizens want to hold, so they buy more imported consumer goods from China and investments from EM countries. The export of investment funds causes the boom in the higher order phases of the capital structure in EM nations instead of the US where the Fed intended the funds to go.

Of course, Europe and Japan add to the world’s stock of reserve currencies and tend to expand credit in sync with the US, thereby multiplying the effects.

At some point, the Fed will begin to cut back on credit expansion in order to head off rising price inflation at home. Investors will repatriate their money from EM nations and cause a decline in the EM foreign exchange rate with respect to the dollar, yen, and euro. The IIF report from October warned that, “... other things equal, if market expectations for the U.S. policy interest rate were to rise from the current 1 percent at end-2015 to 2 percent, this could result in a retrenchment of EM portfolio flows of around $43 billion ...”3

The sliding exchange rate will make debts by EM governments and businesses that are denominated in dollars and euros more difficult to repay and cause some bankruptcies. If EM nations try to defend their foreign exchange rate through higher interest rates to attract more investment, they make domestic borrowing more difficult and run the risk of exacerbating the business slump.

So EM nations face two problems at the same time: (1) the withdrawal of investment funds from the US and (2) a collapse in the demand for commodities as the boom ages and turns into a bust.

If only the Fed could see the damage it causes not just at home, but worldwide.

Roger McKinney is an analyst for an HMO and teaches economics for a small private college.