GET NEWS AND ARTICLES IN YOUR INBOXPrint
A
A
Home | Mises Library | Feel Sorry for BP? 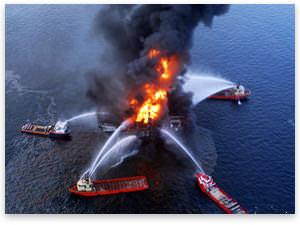 05/05/2010Llewellyn H. Rockwell Jr.
It was 21 years ago that the Exxon Valdez leaked oil and unleashed torrents of environmental hysteria. Rothbard got it right in his piece "Why Not Feel Sorry for Exxon?"

After the British Petroleum–hired oil rig exploded last week, the environmentalists went nuts yet again, using the occasion to flail a private corporation and wail about the plight of the "ecosystem," which somehow managed to survive and thrive after the Exxon debacle.

The comparison is complicated by how much worse this event is for BP. Eleven people died. BP market shares have been pummeled. So long as the leak persists, the company loses 5,000–10,000 barrels a day.

BP will be responsible for cleanup costs far exceeding the federal limit of $75 million on liability for damages. The public relations nightmare will last for a decade or more. In the end, the costs could reach $100 billion, nearly wrecking the company and many other businesses.

It should be obvious that BP is by far the leading victim, but I've yet to see a single expression of sadness for the company and its losses. Indeed, the words of disgust for BP are beyond belief. The DailyKos sums it up: "BP: Go f*** yourselves." Obama's press secretary, Robert Gibbs, said that the government intended to keep "its boot on BP's neck."

How about reality? The incident is a tragedy for BP and all the subcontractors involved. It will probably wreck the company, a company that has long provided the fuel that runs our cars, runs our industries, and keeps alive the very body of modern life. The idea that BP should be hated and denounced is preposterous; there is every reason to express great sadness for what has happened.

It is not as if BP profits by oil leaks, or that anyone reveled in the chance to dump its precious oil all over the ocean. BP gains nothing from this. Its own CEO has worked for years to try to prevent precisely this kind of accident from occurring, and done so not out of the desire to comply with regulations, but just because it is good business practice.

In contrast to those who are weeping, we might ask who is happy about the disaster:

The environmentalists are thrilled because they get yet another chance to wail and moan about the plight of their beloved marshes and other allegedly sensitive land. The loss of fish and marine life is sad, but it is not as if it will not come back: after the Exxon Valdez disaster, the fishing was better than ever in just one year.

The main advantage to the environmentalists is their propaganda victory in having yet another chance to rail against the evils of oil producers and ocean drilling. If they have their way, oil prices would be double or triple, there would never be another refinery built, and all development of the oceans would stop in the name of "protecting" things that do human beings not one bit of good.

The core economic issue concerning the environment is really about liability. In a world of private property, if you soil someone else's property, you bear the liability. But what about in a world in which government owns vast swaths, and the oceans are considered the commons of everyone? It becomes extremely difficult to assess damages to the environment at all.

"The liability for environmental damage should be 100% at least."

There is also a profound problem with federal government limits on liability. That is central planning gone mad. The liability for environmental damage should be 100% at least. Such a system would match a company's policies to the actual risk of doing damage. Lower limits would inspire companies to be less concerned about damage to others than they should be, in the same way that a company with a bailout guarantee faces a moral hazard to be less efficient than it would be in a free market.

But such a liability rule presumes ownership, so that owners themselves are in a position to enter into fair bargaining, and there can be some objective test. There is no objective test when the oceans are collectively owned and where huge amounts of territory are government owned.

And it is precisely the government and the Obama administration that gain from the incident. The regulators get yet another lease on life. They are already sending thousands of people to "save" the region. "Every American affected by this spill should know this: your government will do whatever it takes for as long as it takes to stop this crisis," Obama said.

Are we really supposed to believe that government is better able to deal with this disaster than private industry?

Meanwhile, the Obama administration must be thrilled to have an old-fashioned change of subject, so that we don't have to notice every single day that its economic stimulus has been an incredible flop, with unemployment higher today than a year ago and the depression still persisting.

And why, by the way, when every natural disaster is hailed by the Keynesian media for at least having the stimulative effect of rebuilding, is nothing like this said about the oil spill? At least in this case, losses seem to be recognized as losses.

The abstraction called the "ecosystem" — which never seems to include mankind or civilization — has done far less for us than the oil industry, and the factories, planes, trains, and automobiles it fuels. The greatest tragedy here belongs to BP and its subsidiaries, and the private enterprises affected by the losses that no one intended. If the result is a shutdown of drilling and further regulation of private enterprise, we only end up letting the oil spill win.