GET NEWS AND ARTICLES IN YOUR INBOXPrint
A
A
Home | Mises Library | The Fed Did It, and Greenspan Should Admit It

The Fed Did It, and Greenspan Should Admit It 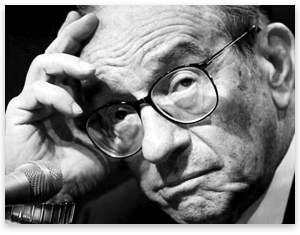 03/19/2009Frank Shostak
In his Wall Street Journal article from March 11, 2009, former Fed chairman Alan Greenspan rejects the idea that the Fed's low-interest-rate policy between December 2000 and June 2004 fueled the housing bubble, which in turn laid the foundation for the current economic crisis.

Greenspan holds that what matters for the housing market is long-term and not short-term interest rates. The Fed, however, doesn't control long-term rates, argues the former Fed chairman.

According to Greenspan, the decline in long-term rates and mortgage rates took place while the Fed had been tightening its interest-rate stance. The federal-funds-rate target was raised from 1% in June 2004 to 4.25% in December 2005.

How in the world, asks Greenspan, can the Fed be blamed for the housing bubble and the current economic crisis?

Who, then, is to blame for this fall in long-term interest rates and for the present economic crisis?

According to Greenspan, the culprit is the savings glut from emerging economies, such as China. This glut of savings was channeled to long-term US Treasuries and other US financial assets thereby depressing their yields, argues the former Fed chairman.

Ben Bernanke concurs. In his speech at the Council on Foreign Relations on March 10, 2009 he said,

Like water seeking its level, saving flowed from where it was abundant to where it was deficient, with the result that the United States and some other advanced countries experienced large capital inflows…

What Greenspan and Bernanke call "savings" is nothing more than the amount of US dollars that emerging economies accumulated.

The accumulation of these dollars by emerging economies cannot increase the pool of dollars. The accumulated dollars are part of the existing pool of US money.

When a Chinese exporter sells goods to an American importer, he is paid with dollars. This means that the ownership of dollars is changed here, not their quantity.

However, if the accumulated dollars of emerging economies are only invested in US Treasuries, then it is tempting to suggest that a sustained fall in long-term rates without an expansion in the pool of dollars is possible.

We suggest that this is highly unlikely. If the pool of dollars remains unchanged while the quantity of goods and assets continues to expand, then this will lead to the fall in the average price. (Remember, a price is the number of dollars per unit of a good or asset.)

This means that explicit and implicit yields will come under upward pressure. (As a result, investors from emerging markets are likely to shift their funds from less-yielding Treasuries to a higher-yielding asset if the pool of dollars remains fixed, thus pushing yields on Treasuries higher.)

It is only the monetary policy of the Fed — and not the accumulation of dollars by emerging economies — that can set in motion changes in the pool of dollars. Hence, the fall in long-term interest rates and mortgage rates has to be the result of the Fed's loose monetary stance.

If what we are saying is valid, then how are we to reconcile the fact that in 2005 long-term rates had been falling while the Fed was tightening its stance?

The emergence of a discrepancy doesn't imply that suddenly the Fed's policies have nothing to do with the housing bubble or boom-bust cycles.

(Recall that, because of a discrepancy during June 2004 and June 2005 between the federal funds rate and long-term rates, Greenspan has concluded that his loose monetary policy between December 2000 and June 2004 had nothing to do with the housing bubble.)

Various discrepancies between the movement in the federal funds rate and the mortgage rate are the result of a variable time-lag effect from changes in monetary policy on various markets.

Because of the variable time lag, a situation can emerge where long-term rates may ease despite the central bank's tighter interest-rate stance.

As a result, more money becomes available for financial markets, which puts downward pressure on long-term rates, all other things being equal.

In November 2004, the yearly rate of growth of the Fed's balance sheet jumped to 6.9% from 4.3% in June 2004. Note that this increase in the pace of monetary pumping took place while the federal-funds-rate target was lifted from 1% in June to 2% in November.

Also note that between December 2004 and June 2005 the average yearly rate of growth of Fed assets stood at a still-elevated 6%.

Contrary to Greenspan and other commentators, we suggest that what sets in motion a boom-bust cycle is not a boom in a particular market such as the housing market but the increase in money supply out of "thin air."

Now let us say that the dollars accumulated by emerging economies were to be invested solely in Treasuries. while this might push long-term interest rates temporarily lower, all other things being equal, it is not going to set in motion a boom-bust cycle as long as the pool of US dollars remains unchanged.

In our writings we have shown that the main source of boom-bust cycles is the Fed itself. Thus, by aggressively lowering interest rates between December 2000 and June 2004 — and accompanying this with monetary pumping — the Fed set in motion an economic boom.

(Note that these activities cannot stand on their own — they cannot fund themselves. They are funded by diverting — by means of new money created "out of thin air" — real savings from wealth-generating activities.)

From June 2004 through September 2007, the Fed adopted a tighter stance, which slowed the diversion of real funding to nonproductive activities.

As a result of this, various nonproductive activities came under pressure. (Without real funding, these activities are forced to go under.)

Now, when money is injected, it doesn't instantly affect all the activities in an economy. The money starts with the first recipients and then moves to other recipients. It moves from one market to another market — there is a time lag.

(The percentage of nonproductive activities — the product of the boom — determines the severity of an economic bust in a particular sector of the economy.)

It follows, then, that a bubble in a particular market cannot emerge without the preceding increases in money supply. This in turn means that a bubble cannot emerge without a preceding loosening of monetary policy, which means it cannot occur without money pumping by the Fed. Hence, what matters for the economic boom, i.e., the emergence of bubbles, is the creation of money "out of thin air" and not the level of long-term interest rates.

Contrary to Greenspan, we can conclude that it is not long-term rates as such that fueled the bubble but the loose monetary policy of the Fed.

We can also conclude that the so-called savings glut in emerging economies had nothing to do with the last economic boom or the current economic crisis.

The only institution that can set in motion the expansion of money and a false boom is the Fed.