The Fed and the Ratchet Effect 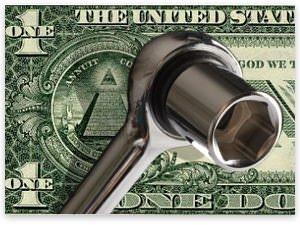 09/06/2010Robert P. Murphy
One of economic historian Bob Higgs's outstanding contributions is the "ratchet effect." During a crisis, the size and scope of government grow tremendously. After the crisis subsides, government shrinks, but not to the precrisis level. In consequence, leviathan expands over the decades, leaping from one crisis to the next.

We see Higgs's thesis of the ratchet effect on brilliant display with the Federal Reserve in the wake of the financial crisis of 2008. The recent Fed announcement, signaling a major shift in policy, shows that Ben Bernanke has no intention of giving up his newly acquired influence.

It's difficult to imagine it now, but just three years ago it would have been inconceivable that the Fed would quickly double the monetary base, or would start buying nongovernment assets in an attempt to rescue specific markets. Most homeowners wouldn't have expected that Fed chairman Bernanke would be buying their mortgages, either.

Yet all of this came to pass, largely spurred by the worldwide financial panic of September 2008. Since then, the Fed has started a wide range of new programs,

and it has been busy creating and testing its arsenal of "unconventional policy measures," or what are simply called the Fed's "tools."

I can remember in October 2008 when bloggers began circulating images of the monetary base and the excess reserves in the banking system. Many of us were in a state of shock; we thought there was a glitch in the St. Louis Fed's graphical system. Glenn Beck eventually showed the chart on his TV show, à la Al Gore pointing to rising carbon dioxide levels.

Seeing such a massive expansion in the Fed's balance sheet, many people (including me) were very alarmed about runaway price inflation. In order to calm markets and hysterical bloggers, the Federal Reserve and its apologists pooh-poohed the alarmists. They claimed that the Fed had taken its unprecedented steps in order to avert global financial meltdown.

Crucially, Fed officials and their cheerleaders reassured everyone that the Fed had an "exit strategy," and that it would eventually go back to the boring old central bank that we've known and loved since 1913.

One of the key components of this return to normality was the "natural unwinding" of many of the emergency measures. For example, here is Ben Bernanke himself, testifying in February 2010 to the House Committee on Financial Services (he said similar things throughout the crisis):

To help stabilize financial markets and to mitigate the effects of the crisis on the economy, the Federal Reserve established a number of temporary lending programs. … The Federal Reserve believes that these programs were effective in supporting the functioning of financial markets and in helping to promote a resumption of economic growth. … The exit from these programs is substantially complete: Total credit outstanding under all programs, including the regular discount window, has fallen sharply from a peak of $1 1/2 trillion around year-end 2008 to about $110 billion last week. …

I currently do not anticipate that the Federal Reserve will sell any of its security holdings in the near term, at least until after policy tightening has gotten under way and the economy is clearly in a sustainable recovery. However, to help reduce the size of our balance sheet and the quantity of reserves, we are allowing agency debt and MBS to run off as they mature or are prepaid. The Federal Reserve is currently rolling over all maturing Treasury securities, but in the future it may choose not to do so in all cases. In the long run, the Federal Reserve anticipates that its balance sheet will shrink toward more historically normal levels and that most or all of its security holdings will be Treasury securities. Although passively redeeming agency debt and MBS as they mature or are prepaid will move us in that direction, the Federal Reserve may also choose to sell securities in the future when the economic recovery is sufficiently advanced and the FOMC has determined that the associated financial tightening is warranted.

In this context, we now see the true significance of the Federal Open Market Committee's policy shift, announced August 10, 2010:

In other words, the Federal Reserve wants to prevent its balance sheet (and the monetary base) from falling as people pay their mortgages off. As those payments roll in, the Fed will replace its maturing assets with more bonds issued by Uncle Sam. This will prop up the Fed's influence in the economy, giving us an excellent graphical illustration of Higgs's ratchet effect:

Say what you will about Bernanke, he's one crafty fellow. (As Bob Wenzel warns, "Don't play poker against Bernanke.") Whether through luck or design, he has managed to hand over hundreds of billions of dollars to some of the most powerful people on the planet, and he has maneuvered the Fed into a position to hold $2 trillion in Treasury debt, all without spooking the markets into expecting massive price inflation.

This last point is important: If Bernanke ever announced, "I just talked with Tim Geithner, and he tells me the Fed needs to loan the government $1 trillion to pay for healthcare reform," then US interest rates would spike. Investors around the world would scream, "The Fed's monetizing the debt!!"

Yet somehow, Bernanke has managed to implement this exact policy, without anyone blinking an eye. In fact, the usual suspects — on both the left and the right — are upset at the Fed's timidity.

It's always risky to speculate on what such a shrewd player will do next. But my guess is that Big Ben won't like being confined to holding boring old government bonds again. When the next shoe drops in our so-called recovery, I expect the Fed to rush to the rescue through yet more unconventional policies. For example, perhaps the Fed will have no choice but to buy up hundreds of billions of assets tied to commercial real estate, credit cards, or — if he's feeling bold — bonds issued from California, Illinois, and other debt-plagued states.

And if this does happen, don't expect Bernanke to clean off the books of the mom-and-pop organizations holding the bad securities. No, Bernanke and the other macro wizards will just so happen to find that their models point them toward bailing out the major bankers and other politically connected titans of finance.