GET NEWS AND ARTICLES IN YOUR INBOXPrint
A
A
Home | Mises Library | Father James A. Sadowsky, SJ, RIP No one who met Jim Sadowsky could ever forget him. I first saw him at a conference at Claremont University in California in August 1979; his great friend Bill Baumgarth, a political science professor at Fordham, was also there. His distinctive style of conversation at once attracted my attention. He spoke in a very terse way, and he had no patience with nonsense, a category that covered much of what he heard. If you gave him an argument and asked him whether he understood what you meant, he usually answered, "No, I don't." He once said to a fellow Jesuit, "that's false, and you know it's false."

Behind that gruff exterior was a very kind and warm person, with a delight in humor. I knew I would get along with him at that conference when he said to a small group of people, "I may not look like a cup of coffee, but I certainly feel like one." I was the only one who laughed, and he said to me, "You have a discerning sense of humor." We were friends from then on.

He delighted in paradoxical remarks, such as "The word philosophy comes from the Greek word philosophia, which means philosophy." "We wouldn't have the concept of free will, unless we had it." "A student of mine once objected to Ockham's razor, on the grounds that it's unnecessary."

He told me that a student in one of his philosophy classes at Fordham wore a tee-shirt that said, "I don't need your drugs." He said that he asked him, "Does this mean you get enough of your own?" The student answered, "Drugs are a very serious subject; you shouldn't tell jokes about them." He said to me, "I don't understand. If he didn't think it was funny, how did he know it was a joke?" After he told me that he sometimes played contract bridge, I asked him whether he was a good player. "Yes," he answered, "but I play with better players." One of my favorites among his comments was, "I like to get to the desserts first, ahead of all the greedy and selfish people."

As one might expect of someone with this cast of mind, his specialty was logic, and he taught this subject at Fordham for over 40 years. He began teaching there in 1960 and continued giving courses in logic long after his retirement; he also taught logic for several years at Blackfriars Hall in Oxford University. He was very popular with the Oxford dons and once brought down the house with his instant response to the question "What would be the appropriate penalty for attempted suicide?" "Execution," he said.

As many readers of Mises Daily will know, he was in political philosophy and economics a follower of Murray Rothbard, who esteemed him highly. He had come across Rothbard's America's Great Depression shortly after its publication in 1963. He soon sought out the book's author and became part of a group that frequently gathered at Rothbard's Manhattan apartment. 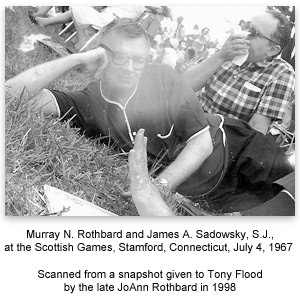 What attracted him to the libertarian point of view was its individualism: libertarianism rejects the notion of a collective interest apart from that of individual persons. In this he found echoes of one of his favorite thinkers among the scholastics, Francisco Suarez, who maintained that political authority rests on consent. If this idea were followed to its full implications, Sadowsky thought, it would lead to anarchism, an implication he fully accepted. Once, sitting on the floor on Rothbard's living room, he said, "I hear that Roy [Childs] is in danger of lapsing into archy." He would never be in this danger.

Sadowsky's distinctive approach to political thought is best summed up in the last paragraph of his most influential article among libertarians, "Private Property and Collective Ownership." He says, "If there is a lesson to be learned from this paper it is that the only enlightening way of analyzing economic and property problems is by always returning to the individual who, alone, is real. People are ill-served by the manufacture of spurious entities." (A number of other papers by Sadowsky are available on this site, maintained by Tony Flood. It was Tony who telephoned me on the morning of September 7 with the sad news of Jim's passing, and he has his own memorial notice here.)

Sadowsky's article first appeared in the Autumn 1966 issue of Rothbard's journal Left and Right, under a slightly different title and under the pen name "Eric Dalton." Jim was somewhat crestfallen when he showed the article to his great friend and colleague in the Fordham philosophy department, Father W. Norris ("Norrie") Clarke. Clarke said, "It sounds just like you, Jim."

He had extremely high standards of rigor and as a result did not publish very much, but he held distinctive opinions on a wide variety of philosophical topics. One of the most important to him was "strict finitism," a position he had learned from his friends Morris and Alice Ambrose Lazerowitz. In this view, there cannot be an actually existing infinite number of physical objects. As he often said to me, "the world is a totality." He used this view to support an argument for the existence of God called the "kalamcosmological argument"; but it was the standard cosmological argument that he deemed the strongest proof for God. He rejected the design argument but argued in a paper he deemed one of his most important — "Did Darwin Destroy the Design Argument?" — that the theory of evolution was irrelevant to its truth. He also held that it was possible to know what someone will in future freely decide to do: there is, he held, no difference in principle between knowledge of the past and knowledge of the future. He also rejected "middle knowledge," but I don't think this is the place to explain the idea to those unfamiliar with the controversy.

In the fall of 2011, he had surgery to relieve the pressure of blocked arteries in his neck. Owing in part to his advanced age — he was then 87 — he never fully recovered from this operation; but he was still anxious to discuss philosophy in our almost daily telephone conversations. In the last few months, I could tell that a lung complaint was causing him severe difficulty, and he was unable to talk over the telephone very much. In our last talk, he complained that broadcasts of the London Olympics were interfering with Days of Our Lives, his favorite soap opera, but he was still looking forward to his two scoops of chocolate ice cream after lunch and dinner every day. Now my dear friend is gone, and I'll never be able to tease him about the ice cream again.