The Fallacy of "Buy Land — They’re Not Making Any More" 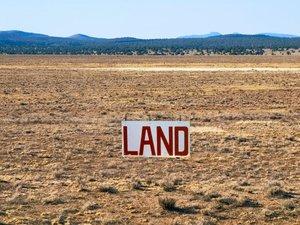 “Buy land — they’re not making any more!” is an old investing chestnut, and a common sense one to boot. Economically, it’s also completely false.

As counterintuitive as it may seem, we make land all the time. It just doesn’t look like land.

Why? Because land’s value doesn’t come from its ability to cover up the naked earth. Land’s value comes from its economic usefulness. From the value of things that can be done using that land (Rothbard’s “marginal revenue product” of the land). And that value is, indeed, changing all the time. Economically, from a price perspective, then, we make land all the time.

Step back a moment and ask why land has value anyway. Why do people want land? Well, obviously, because you can put stuff there — including yourself — plus buildings, swimming pools, and factories.

Now, anybody who’s visited West Texas knows there is plenty of building space in the world. You could drive for hours and meet nobody. There’s lots of space for that factory of yours. But it’s not really space itself that makes land valuable. It’s location. As in, there’s only so much room in Manhattan. Or Central London.

Once again, though, it’s not the actual space that matters. It’s the access. Put a strip mall on Manhattan surrounded by crocodile-filled moats and snipers and it will have low value. The value is in access. So Manhattan is valuable because it’s easy to get to other parts of Manhattan. And it’s easy for other people to get to you. Customers, partners, and friends can all easily visit you if your apartment or office is in Manhattan, moatless and sniperless.

So if it’s the access that matters, are they making new access? Of course. They’re doing it all the time.

What are some of the meta-trends on land as investment, then?

First: roads. This was a bigger value-driver a generation ago in the US, as new roads made the suburbs more accessible, helping to drain many cities even as US population grew. Outside the US (Mexico, Thailand, Russia), new roads are still a big deal, and even in the US, new highways can reshape values — draining old neighborhoods and building value in new ones. The decline of cities like Baltimore or Detroit are partly thanks to those beautiful roads that redistribute access to the suburbs.

Second: population. In the US “rust belt” of declining manufacturing, many regions have dropped in price simply because people are leaving. Detroit homes for $100 is emblematic, although of course there are also political reasons some cities are so cheap — in particular, taxes and crime.

And that brings us to politics. Real estate can be cheapened shockingly quickly by taxes and crime, and those traditional drivers have been joined in recent decades by environmental politics.

Environmentalists, by taking land off the market, effectively squeeze the remaining accessible locations. Driving up the price. Regions like Seattle or San Francisco are poster children of this environmental squeeze, with modest homes even in remote suburbs costing upward of a million dollars. On the other extreme, cities like Dallas or Houston have kept prices down despite exploding populations by allowing farmland to be converted to residential, commercial, or industrial use.

Beyond the access and political angles, land is also vulnerable to “network effects.” In other words, the neighbors matter. Gentrification or urban decay can be hard to predict. Even in a compact city with rising population like Washington, DC, it can be hard to predict where the middle class or rich want to colonize, and where they want to flee.

There are clues, of course — in large US cities, gays moving into a neighborhood, new coffee shops or art galleries are some leading indicators that property prices might swing up. But gentrification has it’s own mind; even in a booming city it might go into some other neighborhood. New York’s Harlem or Silicon Valley’s East Palo Alto are two very accessible locations with low prices because of perceptions of the neighbors.

So, while they’re not “making” land, they are constantly making things that affect land price. Access, regulations, changing neighbors. These are the kinds of factors that make land valuable, not it’s ability to cover the earth.

And so land comes back to earth, joining boring old commodities like wheat or copper. Just as vulnerable to changing supply and demand factors.

And if you are looking for something they’re not “making more of?” Well, gold does come close. Hence its appeal. They do mine new gold all the time, but the costs are high enough that gold is a very “inelastic” commodity. It comes close to “they’re not making more.”

Beyond that? Develop your ultimate resource: yourself.