GET NEWS AND ARTICLES IN YOUR INBOXPrint
A
A
Home | Mises Library | Faith in Free Markets – According to Mr. Bernanke

Faith in Free Markets – According to Mr. Bernanke Federal Reserve Chairman Ben Bernanke considers it to be time for more fund transfers to the coffers of struggling financial institutions here in the United States. The details seem to be basically more of the same proposed solutions from the fall of 2008. If you are interested in reading some of his thoughts as portrayed in the common news media, see his comments quoted in this recent CNN.com article.

In short, while speaking in London recently, he cautioned that the proposed funds for the economic stimulus plan — supported by the robbing of American citizens— are "unlikely to promote a lasting recovery unless they are accompanied by strong measures to further stabilize and strengthen the financial system." This means he is priming for a request for more government funds in exchange for government equity positions in the banks.

There is no mention of the fact that no lasting recovery can possibly come from (1) misallocation of the factors of production, (2) inflation of the money stock in massive proportions, and (3) the squeezing out of capital (in addition to the already-misallocated production factors) from more appropriate, entrepreneurial lines demanded by the free market.

It is interesting to see the psychology at play here: give the banks more money or else the massive stimulus will fail due to "instability."

It is unclear whether this type of scare tactic will ever stop working, but if the recent past is any indicator, Mr. Bernanke will get his wish for more funds. Additionally, Bernanke is calling for global central-bank cooperation. This can be construed to mean global inflation in concert, the bank controllers reaping the benefits while the dollar and other centrally planned currencies are inexorably plundered of purchasing power.

Anyone who has studied free-market economic principles even briefly will have strong concerns regarding these statements. At a deeper level, one hopes that common sense would make it clear to even those who have not been fortunate enough to learn about sound-money principles that these ideas propose a dangerous path.

Perhaps an even bigger problem, however, is that Mr. Bernanke conveys these ideas while professing to be a strong believer in the free markets! It is unclear how this should be taken: is it an outright lie, or does he expect that the average citizen is not capable of understanding the difference between a free market and what we have instead? Indeed, is it Bernanke's wish that the average citizen not understand? This confusion on the citizens' part is, after all, what gives those in power the ability to stay there.

It is hard to imagine a more blatant push towards nationalization of the banks (already a legalized cartel). Further guarantee of the debt of financial institutions — already overburdened with high-risk debt in exchange for the government taking equity positions — is preposterous. The notion of privatized profits combined with losses guaranteed by the taxpayers is usually not what comes to mind when someone touts their strong beliefs in a free-market economy.

Yet these ideas are openly set forth as a solution to the economic problems currently faced in America and around the world. Paul Krugman has commented that President-elect Obama's proposed stimulus plan will not go far enough, i.e., the level of expropriation is not deemed to be high enough to succeed. These ideas, dominated by Keynesian economic thought, are openly discussed — and proposed by the most recent laureate of the Prize in Economic Sciences in Memory of Alfred Nobel, no less — and it seems that the vast majority of the American citizenry pay no attention as the man behind the curtain steers our nation ever more rapidly along the road to socialism.

When thinking through the current situation, the average citizen would do well to consider the teachings of F.A. Hayek, economics Nobel laureate in 1974. An exposition in the mainstream media presenting the competing ideas side by side would be a great start. The hope, ultimately, is that the ideas of liberty and prosperity would be too hard to resist.

Unfortunately, the general idea portrayed by the mainstream media is that the free market has failed and, as Mr. Bush remarked recently, must be abandoned in order to be saved. 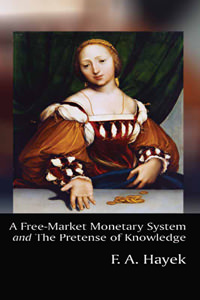 "Faith in free markets can only be established after showing the world what can be accomplished by having true freedom in the marketplace to begin with."

In this light, Mr. Bernanke's conclusion to his recent remarks, reaffirming his strong belief in the free markets, is ludicrous. His actions — supported by the current administration and sure to be supported by the following administration — speak so much louder than his words. But it seems the vast majority do not hear or understand — believing, as they've been told, that our economy is failing because of insufficient regulation. This open attack on capitalism and the corresponding lack of understanding of the truth is a great hindrance to the struggle for liberty.

It is long past time for this to change. As sound economic policies are fundamental to the ideals of freedom, the fallacies inherent in the doctrine preached by Mr. Krugman and Mr. Bernanke, and perpetuated by President Bush, must be brought to light and dispelled. For real change to come to America, this is imperative.

Faith in free markets can only be established after showing the world what can be accomplished by having true freedom in the marketplace to begin with. Mr. Bernanke would do well to keep this in mind as he proposes ever more socialistic measures to correct problems induced by the very organization he is charged to lead.