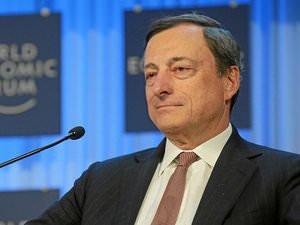 Just as Professor Bernanke exits center stage at the end of Act I of the monetary comedy he created, the scene shifts to Frankfurt. The star of Act II is European Central Bank (ECB) chief Mario Draghi. As we pick up the story, Mr. Draghi has been launching a defense against a phantom threat of deflation.

Meanwhile, our retired star is busy collecting top fees from appreciative “fans,” especially from Wall Street, an area where he once admitted “he had to hold his nose.” What are these fans hoping to gain from their fawning of ex-superstar Bernanke in this new world of monetary transparency, which he proudly claims to have created? Is it the privileged insights that come from networking and knowing how the replacement actor will handle the Fed’s machinery for manipulating long-term interest rates? It has been said that the new chief, rising star Janet Yellen, is “joined at the hip” to her predecessor.

Mario Draghi has yet to acknowledge how much the success of Act II depends on the quantitative easing from Act I, as written and choreographed by Professor Bernanke. The ECB illusionist scored his first big ovation from center stage by proclaiming he would do “whatever it takes to save the euro.” The global asset price inflation plague created by the Bernanke Fed turned those words into immediate virtual reality. Irrationally exuberant investors in their search for yield have been chasing any half-plausible story. Europe with its onetime array of high-yielding markets has been fertile ground for such speculative hypotheses, including Draghi’s boast.

The ECB president is impervious to the critics who say his new strategy of injecting an added strain of asset price inflation into the veins of the European economy, though bolstering the European Monetary Union (EMU) in the short-term, could be fatal in the longer term. That is no laughing matter, because the collapse of EMU in the next great asset price deflation in global markets could bring a monetary revolution.

The essence of comedy is inflexibility, not the volume of the laughter. Don Juan is comic because even when granted a last chance of repentance, or else face death by fire, he cannot change his ways. In the present Bernanke authored comedy, the central bank actors cannot stop trembling for fear of deflation. Yet there has been no actual or threatened monetary deflation during all the years of this long-running show (and well before then).

Under a hypothetical regime of monetary stability the invisible hand of market forces would cause there to be periods of falling and rising prices. The determination of the Federal Reserve to fight those natural down-waves in prices such as occur in business contractions, or under the influence of technological change, has been the source of outbreaks of asset price inflation culminating in great recession and in long-run diminution of economic dynamism.

The Bernanke-ite comedic characters, though, remain convinced that any episode of falling prices would mean economic catastrophe and they have conjured a whole folklore, spanning from the Great Depression to Japan’s Lost Decade, to demonstrate this misleading assertion. ECB chief Mario Draghi cites the fight against deflation as the principal reason for introducing negative interest rates on deposits at the ECB, and a further package of below market cost loans to weak banks.

Yes, prices, and even some wages have been falling in Spain and Italy. But this is simply a result of the unsustainable high levels that resulted from the asset and credit inflation of the last decade, and are now falling slowly in line with real equilibrium tendencies. In Germany, goods-and-services inflation is running at over 1 percent per annum and real estate price inflation is at 10 percent-plus in many cities.

Understandably the German media is voicing complaints by savers being penalized for the camouflaged purpose of aiding crony-capitalist bankers in southern Europe. Mario Draghi gives the standard response of the deflation phobic central banker: Non-conventional policy tools will stimulate a strong recovery which should ultimately benefit the rentier. Who is he kidding?

It appears he is kidding many. The boom in carry trade (the assumption of currency, credit, or maturity risk in the pursuit of higher yields), a key symptom of the asset price inflation disease which ECB and Fed deflation fighting created, now features 10-year yields on Spanish government bonds, below those on US bonds.

Many in the marketplace now question whether there ever really was a crisis in the European Monetary Union. The David Low cartoon comes to mind, John Bull rubs his eyes on March 13, 1939, asking whether the Munich crisis of the previous November was just a bad dream. No wonder the euro stays at high levels.

Back on stage, the Bernanke-ite comedians are now puppeteers, pulling the strings of their puppets, donning their Emperor’s new clothes (in the form of rate manipulation machinery the effectiveness of which depends on market irrationality), and waving their wands. The question of whether the comedians are themselves puppets does not cloud the minds of those in the audience mesmerized by the show, and expecting to cash their profits before speculative temperatures drop. The retired actor and author, in the twilight of his career, knows his appearance fees depend on the show’s continued power to mesmerize the crowd.