Employer-Provided Health Care Is Not a Religious Issue 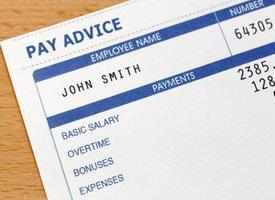 The fact that opponents of private property rights have managed to frame the debate over health-care mandates as some sort of religious issue is one of the great public relations coups of our time.

Note below, for example, the top of a full page ad in the New York Times taken out by a group called the Freedom From Religion Foundation.

After approvingly quoting eugenicist Margaret Sanger, the ad goes on to claim that the Supreme Court’s Hobby Lobby decision is a Catholic plot to impose “dogma” on the United States legal system. Further down (not pictured), the ad then claims that allowing employers to choose what sort of compensation they give their employees in exchange for labor is proof that the United States is becoming a “theocracy.” 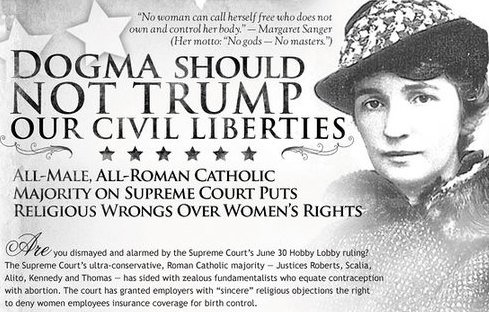 This sort of thinking is part of a larger, and truly bizarre, assertion that a respect for freedom or civil liberties demands that employees use the power of the state to force one’s employer to provide certain types of health care. Some opponents of the Court’s decision go on to argue that allowing a religious exemption for one group of religious people is “inconsistent, dangerous, and unfair to other religious Americans.” The implication is that by allowing employers some modicum of freedom in negotiating with employees, the employer is somehow imposing the religion of the employers on the employees.

Following this same logic, Hillary Clinton went on to say that refusing to pay for contraception coverage is a “slippery slope” toward religious extremism and that freedom of choice for employers in providing health care is akin to imposing Islamic Sharia Law.

It is unfortunate that the issue of employer-provided health care has been framed as a religious matter. As a political ploy, it is quite a savvy move, however, since by casting the dispute over health-care mandates as a type of religious debate, the proponents of government-regulated health care have successfully distracted the public from noticing that the dispute is only a debate over wages and contracts, which are of interest to all employers and business owners, and not just religious or conservative ones.

Part of the blame for this focus on religion lies with the Supreme Court itself. Hobby Lobby challenged the mandate using 1993’s Religious Freedom Restoration Act. In turn, the Court’s majority, which sided with Hobby Lobby, applied the act to “closely-held” private companies, including for-profit ones. This court’s decision was indeed a victory for freedom of choice for business owners, but it is an extremely limited one, and amounts to a very small bone being tossed to employers by the court. Why should employers need to have a religious problem with some aspect of a government regulation to be exempt from it? Should not employers be allowed to offer employees wages and benefits that conform to what the business and laborer freely agree upon? Certainly, workers who do not care for any particular benefits package offered by an employer are free to reject it. If an employer wishes to pay only for New Age health care services based on “crystal healing” he should be free to do so. Likewise, if an employer subscribes to some unusual sex cult and provides health care benefits in the form of vouchers for brothels, he or she should also be free to do so. Likewise, if an employer wishes to provide no health care benefit at all, for whatever reason, based on whatever religion, philosophy, or ideology, he or she should also be able to do so. To object to this is to argue that it is right and moral for the state to use violence or the threat of violence to force employers to provide only certain types of state-approved compensation to employees.

And why the obsession with health care coverage? Employer-provided health care coverage, after all, is simply a type of wage paid to workers in exchange for work. The now-widespread practice of offering health-care benefits to employees is an accident of history:

The very existence of the system is itself a very strange occurrence and a big hint that government intervention played a key role in its creation. After all, employers do not pay for food or gasoline; why do they pay for health care?

Employer-provided health insurance has its origin in a tax policy passed in 1943, which made insurance provided by employers tax free. At the time the United States was engaged in World War II and had enacted wage and price controls, preventing employers from competing for scarce labor using the normal mechanism of offering a higher salary. Instead, businesses used the availability of newly tax-subsidized health care as a means of differentiating themselves.

The tax advantages were made even more attractive and fully codified in the 1954 Internal Revenue Code. Over the next few decades, the government’s subsidization of employer-provided health insurance lead to the dominance of that model of health care delivery, as the data from the 1965 Sourcebook of Health Insurance Data makes clear.

Federal health-care mandates are nothing more than federal diktats on how employers shall pay employees, but the way that an employer pays employees, or what type of health care services are covered, has nothing at all to do with imposing a Catholic Theocracy or Sharia Law or any other value system. It is simply compensation traded for labor.

It is unfortunate that Hobby Lobby had to resort to invoking the Religious Freedom and Restoration Act, although it is likely that Hobby Lobby’s lawyers saw no other avenue of legal defense.

If the Congress or the federal courts had any regard for private property, Hobby Lobby would not have been forced to make an argument about religious freedom, but could simply have appealed the mandate as an unwarranted attack on the right of employers and employees to freely negotiate wages.

During the Lochner era of the Supreme Court, when the court correctly viewed the right to freely enter into contracts as an extension of basic property rights, the Court routinely struck down laws mandating minimum wages and other regulations on the grounds of a right to freely contract. If this far-more-reasonable view of property rights were still popular with federal courts today, Hobby Lobby’s case against the Obamacare mandates would have been easy to make on totally non-religious grounds. Since the end of the Lochner era during the New Deal, however, the prerogative of government to meddle in even the smallest aspects of the employer-employee relationship has become so indisputable that those seeking exemptions from federal laws over such matters are forced to fit their legal arguments within the little box known as “religious freedom.”

Just as the federal government has literally reduced free speech to little boxes in the form of “free speech zones,” the right to use one’s private property freely is now constrained to the realm of religious freedom only. If you can prove that your objection to some government regulation is connected to some widely-held belief system, you may be able to gain a few scraps of freedom from the table of the federal courts. If you subscribe to a belief system that is not recognized as a religion by the federal courts, however, you are surely still on your own. Also note how the courts have constrained the reach of the Religious Freedom Restoration Act only to certain types of employers. Individual taxpayers, such as the Quakers, who object to their tax dollars being used to bomb people, for example, are still completely out of luck, and the Supreme Court was careful to make tax law immune from any religious-freedom claims in the Hobby Lobby case.

In the wake of the decision, interventionists are outraged that any group of people, for any reason, have obtained a small amount of freedom of choice in dealing with people who wish to trade some labor for money. This particular freedom is likely to be the nose of the camel under the tent, they fear. One can only hope. It’s nice that religious freedom has been protected in a very small way, but there’s no reason for true friends of freedom to stage a victory parade just yet.