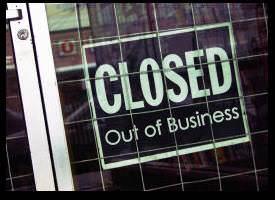 Creative destruction (Joseph Schumpeter's phrase) occurs when innovations — new technologies or business models — demolish the capital structures of well-established industries, industries that have lost the ability to satisfy the urgent wants of consumers.

This process can happen almost over night, such as when the vinyl record industry collapsed in the wake of digital music. Or, the process can slowly run its course, similar to the decades-long crumbling of a building's foundation. Here the process is akin to the way moss attaches to surface imperfections and degrades — over decades — the strength and resilience of concrete.

Just a few weeks ago, I saw a possible crack develop in an established capital structure. I found some moss on the massive concrete structure that is the lawn-care business.

The lawns of central Ohio suffered this summer due to heat and drought. Lawns were dry and brown by the end of August. Cooler, wetter weather did not arrive in September as usual; the warmth and clear skies prevailed.

To help lawns return to health, many residents hired lawn-care services to aerate their lawns. Aeration is an interesting process; a machine — the size of a stand-up, professional lawn mower — pulls plugs of turf and soil from the yard. The resulting holes reduce soil compaction and thatch, allowing water and nutrients to get to the roots of lawns that suffered for months.

In my area, there is a host of established lawn-care providers. These full-service companies have large capital investments in machines, fleets of vehicles, etc. The companies provide quality services at a price that beats my real costs plus the alternative cost associated with my free time. Being frugal — what some call cheap — I always look for the best deal in aeration.

A month or so ago, someone left a simple flyer on my mailbox advertising an inexpensive aeration service. Though I had never heard of the company before, I knew that aeration is a simple process where almost nothing can go wrong. So, I called and scheduled an appointment.

A couple of weekends later, two young men pulled up in a truck and trailer, dropped the gate, and backed two aeration machines onto the ground. They quickly started the motors and began their work. Not a moment wasted.

From the comfort of my home, cup of espresso in hand, I watched these two perform their task. After a while, I noticed that the machines and trailer had stickers that advertised a local rental store. Then it hit me: These machines were rented, as was the trailer. Rented?! I thought about for a bit, and then concluded that I just might be witnessing creative destruction firsthand.

When one of the men came to the door to be paid, I asked him about his business model. Turns out that he and his friend advertise their service, and, only when they can schedule a full day's worth of customers, they rent a trailer and aeration machines. For this, they each clear $800 per day (less taxes of course).

Beautiful. No risk and no capital investment — other than paper for flyers and a couple of bucks in gas. And, since they aerate only on weekends, they are able to keep their day jobs and associated incomes.

The men are looking to expand their business and provide additional services. As with aerating, the model they plan to use is based on renting equipment only when they have a full schedule. With a stripped-down delivery system and no real overhead, the men will be able to undercut the big players in the lawn-care market. I fully expect their business to take off, challenging the big boys and stealing their market share.

Just like bleach to moss, government regulations can destroy new ideas before they can begin to crack the foundation. You see, the two men aerating my lawn are currently only a minor annoyance to existing firms. Yes, they capture a small share of the market, but never enough to cause concern — that is, until they grow in size and become real market players.

At some point, these guys will cross a line, and at that point, government will step in.

Governmental regulations are typically created through the political pressure of existing companies, companies that want to protect themselves from the impertinent upstart. As always, as if on cue, the useful idiots stand alongside the government regulators, becoming the public face for regulation while crying for the need for government in all things. The useful idiots whine, and the regulators step in to protect, while the established businesses snicker in the background.

Our lawn-care friends cannot incrementally grow their business. At certain thresholds, regulatory and legal roadblocks appear. Once the lawn guys hire their first employee, they will enter the world of red tape. In essence, their company and capital will no longer be exclusively theirs; it becomes the property of the collective we.

I witnessed the strong arm of government firsthand as a neighbor tried to grow her casual baking business one small step at a time. You see, she produced excellent goods, and people desired them. However, once some agent of the state spotted too many cars in her driveway, the hammer of zoning came crashing down. So, she moved to a small shop in a local strip mall, going from a freewheeling baker of wedding cakes and other goodies to a regulated place of public convenience.

No longer was she the nimble entrepreneur. She was now burdened with licenses, compliance, and mall-sized rent. It was no wonder that her business failed in the end — not because her product was undesired, but because she could not make the leap from casual sales to established business in one bound. Maybe she could have grown her business over time in an unregulated environment, but the government-created hurdles are set much too high to be leaped in one bound.

So we will never again enjoy those cakes and assorted goodies, except, just maybe, every now and again on the sly.

And, most likely, we will never see if a business model based on rented equipment is able to crack the existing foundation of the lawn-care business, not because the idea is known ex ante to be inefficient, but because government stands ready to squash creativity and protect existing capital structures, all to the detriment of the consumer.

Creative destruction is required for a vibrant economy. Allowing government to stop change and innovations through regulations hurts the consumer and squashes both new products and improvements. Embrace creative destruction; with it, we will all be much better off, lawns and taste buds included.