The Economics of Tipping 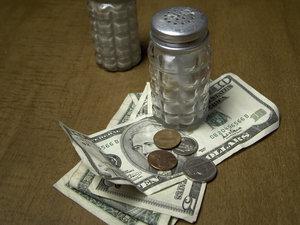 My dinner companion sounded indignant. “It’s a shame we have to tip the waitress,” she said. “The restaurant owner ought to pay the staff enough to live on.”

I imagine that is a common attitude among those steeped in our current cultural climate of envy and dislike of economic success — the anti-capitalist mentality, as Mises put it. It’s easy to fall into the trap of thinking that we tip waiters out of sympathy, due to their misfortune of having to work in an industry full of greedy restaurant owners who won’t pay a “living wage.” In fact, tipping is an elegant market solution to a particular set of circumstances, often present in service jobs, that makes determining an appropriate wage extremely problematic. The practice of tipping used to be more common, applying to many more service positions than at present, when it is largely restricted to waitstaff and skycaps. Part of the reason for its partial demise is just the wandering course of economic change, but many jobs that used to be paid primarily by tips came to be covered by minimum wage legislation and simply disappeared.

So why do we tip? At first glance it seems rather odd that a waiter should be paid by two different people — employer and customer — for the same job. But in fact we, as tipping customers, are paying for a very different aspect of the waiter’s job than is the employer. The restaurant owner needs a way to get the customer’s order to the kitchen and the food out to the customer. Most anyone who can walk a straight line and operate a pencil can perform that task. But the restaurant owner also wants happy customers, and customers are happy when they have a waiter who can solve problems, handle special requests, and generally make their meal a pleasant experience, and that is a special skill set indeed. Coordinating these two different, and not closely connected, aspects of the job is what tipping is all about.

The employer wants happy customers, but he has a twofold information problem. As a practical matter it is difficult for him to observe interactions between waitstaff and customers. In addition, the customers’ expectations regarding the quality of service are impossible to observe. This is further complicated by the fact that staff members are heterogeneous; they are different in terms of skill levels, personalities, and other characteristics that affect the customer’s experience of quality service. Thus the employer doesn’t have the information he needs to arrive at an appropriate wage for each member of his staff. The customer, however, is a participant in these interactions and as such has as complete information as is humanly possible. If the customer pays the server directly for that aspect of the job, the decision of the appropriate pay is made by the person with the most information about job performance.

Employers generally want their employees to give their best, and presumably are willing to pay for that. However, the aforementioned information problem inhibits his ability to do so. Ideally, tips make the server’s compensation directly proportional and immediately responsive to the quality of service provided. This aligns the employee’s incentives with the employer’s; both now want to provide high-quality service to the customer, each for their own benefit.

Hiring a new employee entails risk. For the new employee, there is the risk that the job may not turn out as he had hoped. It could turn out to be a dead end with no future, or unsatisfactory in innumerable other ways. The employer, however, has a financial risk. The new employee’s skill set is unknown to the employer to at least some degree, regardless of how thorough the interview process might be. There is even more uncertainty with an inexperienced new hire; there is no history for the employer to work from. The employer has to pay the agreed upon wage, and if the new employee doesn’t perform as hoped he is losing money. If the new employee accepts a lower guaranteed wage and makes part of his compensation contingent on performance — the tip — this relieves risk in two ways. First, the employer is more willing to take a chance on a young, inexperienced worker. If the wage is lower, the minimum performance level needed to make the employee worth the wage is also lower. Second, since the employee can increase his earnings directly and immediately by improving his performance the job is not so much of a dead end. The low paying job becomes a valuable stepping stone, allowing the young, inexperienced employee to learn job skills, establish a performance record, and move on to something better. (It should be obvious that minimum wage legislation short-circuits this entire arrangement, making the employer much less willing to hire someone unless he is certain they are worth the higher wage. This is how lower-skilled individuals get shut out of the job market. But that’s the subject of another essay.)

That is the magic of the market. Even mundane habits like leaving a tip for a waiter play an important role in social cooperation and coordination. It is an elegant solution to a knowledge problem, developed spontaneously through the actions of a myriad of market participants. When left alone, people are pretty darn resourceful.