The Economics of the Rose Market 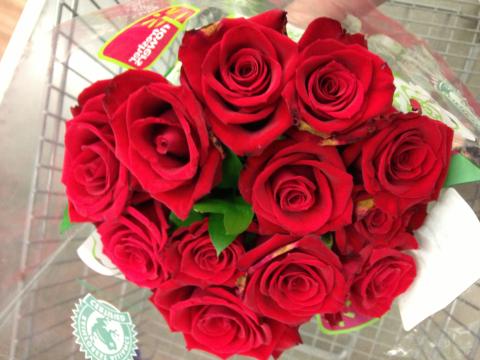 A day of love, romance, and of course, the market process.

Today, lovers across the U.S.—and Canada, Mexico, Australia, New Zealand and much of Europe—bought roses for their sweethearts.  A beautiful gift, roses are.  Pricey too, especially on Valentine's Day.

Nationwide, rose prices are often double on Valentine's Day from what they are on most other days of the year.

Why are rose prices so high on Valentine's Day?

The real reason?  It's the consumers.

The growers make a case that sounds convincing. They point out that consumers have some rather exacting preferences when it comes to roses. More than 60 percent of the roses Americans buy during the year are for three days: Valentine's Day, Mother's Day and Christmas.

Valentine's Day is the most popular rose day of all. It typically accounts for 25 to 30 percent of a rose grower's annual sales.

Getting 130 million roses to the market for one day is neither easy nor cheap, say the growers.  Roses can't be cranked out like hamburgers or oil changes.  Roses require time, care, warmth and sunlight.

Most of the roses on the market are grown in greenhouses.  According to Roses Incorporated, a rose growers trade association, commercial rose growers in the U.S. operate nearly 900 acres of greenhouse area at a capital investment of about $1 million per acre.

In summer, a greenhouse can grow a rose in about 30 days.  But in the cold, dark months of December, January, and February it takes between 50 and 70 days to grow a rose.

Keeping the Valentine's Day rose crop warm while it grows requires a lot of heat.  So much that the winter heating bills of large, California greenhouses typically exceed $200,000 a month.

And the production logistics are daunting.  At the same time growers are filling the Christmas season demand, they must gear up to produce a huge Valentine's Day crop.

The distribution logistics are no less daunting. The timing must be perfect. Growers and wholesalers must get the rose crop to 26,000 florists and 23,000 supermarkets within five days of Valentine's Day. Any sooner is too early, for the roses may perish. Any later is too late. Not many people buy roses the day after Valentine's Day.

No question about it, the obstacles that rose growers must surmount to get more than one hundred million roses to the market for one day are substantial.

The gigantic demand for roses creates a gigantic demand for the land, labor and capital that are used to grow roses. Rose prices rise, and the cost of growing roses follows suit. Producers can only pay these costs so long as consumers are willing to pay the price.

Consumers are sovereign on Valentine's Day. Just as they are on every other day.