GET NEWS AND ARTICLES IN YOUR INBOXPrint
A
A
Home | Mises Library | Economics: It's Simpler Than You Think

Economics: It's Simpler Than You Think 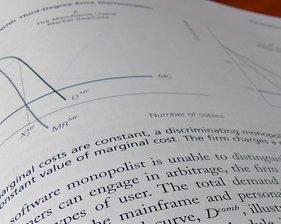 In the view of John Tamny — an editor at Forbes and RealClearMarkets — economics as it is usually studied and taught in universities is unnecessarily complicated. The basic truths of economics are simple and require no difficult mathematics to understand. Readers will be reminded of Hazlitt’s great Economics in One Lesson.

The book is animated by a controlling vision. A successful economy depends on innovative entrepreneurs who are willing to take large risks in return for the chance at great profits. It is essential to prosperity not to hamper the efforts of these entrepreneurs through governmental efforts to tax and regulate the economy. Tamny illustrates his thesis with many stories about famous persons, as the subtitle of the book suggests.

The government, Tamny emphasizes, produces nothing on its own. It operates by taking resources away from the productive. To the objection that the government may itself use money it takes in taxes for purposes beneficial to the economy, Tamny answers that people successful in business are highly likely to be better judges of what is beneficial than bureaucrats in the government. If the bureaucrats were better able to discern profit-making opportunities, they themselves would be entrepreneurs. High level bureaucrats may earn substantial salaries, but the wealth of those in business is far greater. “If you’re so smart, why are you a bureaucrat?”

To this, one can imagine someone objecting: Even if it is right that successful entrepreneurs will raise economic productivity, does this not bring with it a great danger? What about inequality? What if the successful entrepreneurs do so well that they accumulate vastly more wealth than others? Thomas Piketty has notoriously made much of this point; but Tamny has an effective and simple answer to it. Great accumulations of wealth are desirable: the rich will invest their money, and everyone will benefit. “When the rich ‘hoard’ their wealth, it is loaned to those who need money for cars, clothes, and college tuition, not to mention the next generation of Bill Gateses, full of ideas but in need of the capital that will abound if some of society’s richest keep their wealth intact so it can pass to future generations.”

If high investment is the key to prosperity, the capital gains tax is especially to be deplored. “Investors who might risk their capital in the private sector know they might lose it all, and they face a 20 percent tax on whatever return they do get on their investment. Those same investors have the option of buying government bonds, and, though the returns are small, they’re reliable and, in the case of municipal bonds, tax-free. ... Our tax code ... puts entrepreneurs at an enormous disadvantage when they compete with the government for investors.”

Taxation is of course not the only way the government hampers the free market. Attempts by government to regulate the economy face exactly the problem that Tamny finds with taxation. Antitrust laws, for example, purport to prevent companies from gaining monopoly control of important commodities; but are not those on the scene better qualified than government “experts” to assess whether market conditions make mergers desirable? Once more, it is entrepreneurs, not government officials, who are skilled at anticipating future demand. “Mergers are ultimately about survival. Companies must adjust to an uncertain future business climate, and restraining the ability of larger businesses to act in the best interests of shareholders is counter-productive. Antitrust regulation does not foster competition so much as it reduces successful companies to sitting ducks.”

“Capitalist Societies Can Rebound from Anything”

We have so far omitted a key part of Tamny’s argument. Skilled entrepreneurs succeed, but many in business fail. The market operates by sorting out of the successful from the failures by the test of profitability. Given this fact, it is as essential that the failures be allowed to fail as it is that those who succeed be allowed to keep their profits. Attempts to prop up failures disable the market.

This vital point can be used to answer a common objection to free trade. Many people object to free trade because, in some cases, foreign competition drives domestic companies out of business, causing unemployment. To the response that expanded trade creates jobs elsewhere in the economy, the reply oft en given is, what about the workers who do lose their jobs? They are often unable to secure new jobs as good as those they had previously. The fact that others are better off is small solace to them.

Tamny’s account of the way the free market works makes it impossible to accept the objection just given. “In a free economy, capital migrates to talented entrepreneurs eager to pursue profitable opportunities. Innovations like the automobile, computer, and online retail services destroy jobs, but the process leads to better, higher-paying jobs ... to create jobs in abundance, we must allow the free marketplace to regularly annihilate them.” Tamny acknowledges that “the progress of job creation through job destruction does not make losing your jobless agonizing. ... Yet getting laid off is not cause for despair. Good often comes from losing your job.” Workers, like capitalists, need to be alert to new opportunities.

In a manner showing great insight, Tamny applies the point about falling businesses to the financial crisis of 2008. According to Ben Bernanke, Timothy Geithner, and many others, only the massive bailouts of financial institutions in response to the collapse of the housing market saved the economy from disaster. Tamny reverses this contention. It was essential to the proper working of the market to allow the businesses that had acted recklessly to fail. Had this been done, the economy could have quickly readjusted. “Capitalist societies can rebound from anything. In particular, they can bounce back from bank failures that do not exterminate human capital or destroy their infrastructure. An interfering government is the only barrier to any society’s revival, and that is why the global economy cratered amid all the government intervention in 2008.”

Gold, Money, and the State

So far there has been little reason to dissent from the author’s principal arguments. In monetary theory though, he makes what seems to me an incorrect claim; but fortunately, his main policy prescription can be restated in a better way. Tamny rightly calls for sound money. He rejects as misguided inflationary efforts to reduce our “unfavorable” balance of trade. As he points out, a trade deficit is not at all to be feared. “All trade balances. Trade ‘deficits’ with producers from near and far away are the rewards for everyone’s productivity.”

So far, so good; but he errs when he compares the dollar to a measuring rod that must not change. “Just as the foot is never long or short, money should be neither strong nor weak. The foot is a standardized tool to measure actual things, and money should have the same constancy.” What is his argument for this view? As he points out, people want money, not for its own sake, but in order to purchase goods and services. (We set aside a few exceptions.) He thinks that from this fact, if the government follows the proper policy, the value of money can be kept constant. Relative prices of goods and services will change, to reflect changes in their supply and demand. Money can then serve as a measuring rod, to enable people to assess these changes in relative prices. It does not follow, though, that because money is demanded as a means to get other things, there is no independent demand for money at all. In the free market, money is a commodity whose price can change.

Even if Tamny is wrong on this point, though, his main message can be salvaged. It is entirely desirable that the monetary commodity be one unlikely to be subject to substantial fluctuations in price. The gold standard abundantly meets this requirement, and this gives Tamny all that he can reasonably want. To speak of measuring rods merely darkens counsel, as Mises long ago pointed out. “Although it is usual to speak of money as a measure of value and prices, the notion is entirely fallacious. So long as the subjective theory of value is accepted, this question of measurement cannot arise.” (Mises, Theory of Money and Credit, chapter 2.)

The book’s many insights far exceed in importance this disagreement about money as a measure of value. Popular Economics is an outstanding book that, if read widely, will greatly improve public understanding of basic economic truths.

David Gordon, "Economics: It's Simpler Than You Think." Review of Popular Economics: What the Rolling Stones, Downton Abbey, and LeBron James Can Teach You About Economics by John Tamny." The Austrian 2, no. 2 (March-April 2016): 12–14.