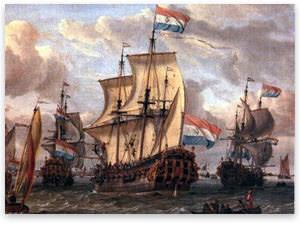 The Dutch West India Company began operations in 1623, and in the same year the first party of permanent Dutch settlers landed in the New World — apart from a settlement near Cape May on the Delaware Bay in 1614. The new colonists landed in Manhattan. Others in the party settled in Fort Orange. The settlers, significantly, were a party of Walloon émigrés. Appointed governor, or director general, of New Netherland was Capt. Cornelis May. Under May's aegis the Dutch quickly began to expand over the vast virgin territory. Fort Nassau was built on the east bank of the Delaware River (now Gloucester, New Jersey, opposite Philadelphia). Another Dutch party built Fort Good Hope on the Connecticut River, and we have seen the fate meted out to it by the English "planters" of Connecticut. Still other Dutchmen settled on what is now the coast of Brooklyn and on Staten Island.

Why didn't the English, who had laid claim to the whole coast, seriously molest the Dutch settlements? For the first decade the English were busy fighting with Spain and France. After that came the troubles and distractions of the Puritan Revolution. It was only the advent of the Restoration period that enabled England to turn serious attention to exerting its power over New Netherland — as well as over Massachusetts.

In the spring of 1626 Peter Minuit took over as director general, and it was he who, in a series of fateful decisions, laid the pattern of social structure for New Netherland. In the English colonies the chartered companies and proprietors tried to gain immediate profits by inducing rapid settlement. The need for these inducements led to the inevitable dissolution of original attempts to maintain feudal land tenure, as lands were divided up and sold, and halfhearted attempts to collect feudal quitrents from the settlers were abandoned in the face of their stubborn evasion and resistance. Moreover, the need for inducing settlement also led the companies or proprietors to grant, from the beginning, substantial rights of democracy and self-government to the colonists. Happily, none of the English settlements began as royal colonies; either they were settled by individuals, for individual temporal or spiritual gain, or they were governed by profit-seeking companies or proprietors who were induced by hopes of profit to grant substantial or even controlling rights of property and self-government to the settlers. North Carolina, New Hampshire, Maine, Rhode Island, and Connecticut began as individual self-governing settlements; Virginia and Massachusetts as chartered companies; Maryland and South Carolina as proprietorships.

But the Dutch West India Company and Minuit decided quite differently. As profit seekers they first concentrated on their monopoly of the lucrative fur trade, and for this trade extensive settlements were not needed. Whether by design or not, the effect of Dutch policy was to discourage settlement greatly, and to hamper the development of the vast area over which the Dutch West India Company had been assigned its monopoly. For example, one of Minuit's first actions was to order the colonists back, to concentrate them around the fort in New Amsterdam on the tip of Manhattan, which had been purchased from the Indians. This arbitrary policy left only a few traders at Fort Orange and only one vessel on the Delaware, Fort Nassau being completely abandoned. This action stemmed from the company's high-handed decision to retain its exclusive monopoly of trade; to leave too many individuals in the interior would foster illegal, competitive trading. Second, the Dutch perpetuated a feudal type of land tenure by insisting on leasing, rather than selling, land to the settlers. It is no wonder that with no settler permitted to own his land and thus help to dissolve feudalism and land monopoly — and with no one permitted to trade on his own account — the pace of settlement was very slow.

Furthermore, the form of government was by far the most despotic in the colonies. There was no self-government or democracy, no limitation whatever on the arbitrary rule of the company and its director general. The director, along with a Council of Five appointed by the Amsterdam Chamber, ran the entire government: its legislative, executive, and judicial functions. They were joined by two other officials appointed by the company: the schout-fiscal, who made arrests and collected revenue, and the koopman, the secretary of the colony. There were no legislatures or town meetings of any sort.

By 1629 it was evident that the colony was growing very slowly; only 300 persons, for example, lived in New Amsterdam. The company therefore decided to spur settlement, but instead of dissolving its land monopoly into a system of true private property for landed settlers, it decided to make the monopoly into a more elaborate feudal structure, sub-land monopolists placed over large particular areas in New Netherland. In the Charter of Privileges and Exemptions of 1629, the company decided to grant extensive tracts of land to any of its members who should bring over and settle 50 or more families on the tract. The tracts were required to lie along the banks of the Hudson (or other navigable rivers) and were granted in huge lots of 16 miles along one shore of the Hudson, or 8 miles on both shores. The depth on either side of the Hudson was indefinite. The grantee was termed a "patroon," or lord of the manor. In imitation of the feudal lord, the patroon was to possess civil and criminal jurisdiction over his tenants, or "peasants." The tenants had the formal right of appeal from the patroon's manorial courts to the feudal overlord — the company's government — but in practice the tenants were forced to forgo this right. The property of any tenant dying intestate reverted to the patroon, and the tenant was forced to grind his grain at his patroon's mill. The tenants were exempted from colonial taxation for ten years, but in return they were compelled to stay on the original estate for the entire period. To leave was illegal — an approximation of medieval serfdom.

Aside from being a temporary serf and having no hope of owning the land he tilled, the tenant was also prohibited from weaving any kind of woolen, linen, or cotton cloth. Even the patroons were prohibited from weaving, in order to keep the monopoly of the trade in the hands of the company government and to maintain a monopoly of the colonial market for Dutch textiles. This provision, however, was continually evaded and led to numerous conflicts. Neither tenant nor patroon could engage in the fur trade, which was still reserved to the company and its agents. Apart from these commodities, the patroons were at liberty to trade, but were required to pay a 5 percent duty to the government at New Amsterdam for exporting their goods. The use of slaves in domestic service or in tilling the soil was also sanctioned. The patroons were required, however, to purchase the granted land from the local Indians. It should be noted that Manhattan Island was exempted from the granting of patroonships: the land of that valuable island was to be reserved for the direct monopoly of the company government of the province.

While the incentive to become a tenant remained minimal, the incentive to become a patroon was now considerable. It should not be surprising that the receivers of these handsome grants of special privilege were leaders or favorites of the company itself. Thus, the first patroonship was granted by the company to two members of its own board of directors, Samuel Godyn, president of the Amsterdam Chamber of the Company, and Samuel Blommaert, who granted themselves a large chunk of what is now the state of Delaware, as well as 16 square miles on Cape May across the Delaware Bay. Godyn and Blommaert took five other company directors into partnership to expand the capital of the patroonship, and one of the partners, Capt. David De Vries, was sent with a group of settlers to found the patroonship of Swanendael (now Lewes), near Cape Henlopen in Delaware.

The Swanendael manor was settled in 1631, but the settlement soon ran into difficulties. For one thing, it was chiefly designed as a whaling station, but De Vries soon found that whales were scarce along the Delaware coast. Furthermore, the Swanendael settlers managed to provoke the Indians into attacking and massacring them. The settlers had emptied a pillow, leaving the remains as waste, which happened to contain a piece of tin embossed with the emblem of the States-General of New Netherland. An Indian chief found the abandoned tin and used it for his tobacco pipe, whereupon the settlers, in an act unexcelled for stupidity even in the sordid history of white treatment of Indians, executed the hapless chief for "treason" to the Netherlands. It is hardly puzzling that the Indians proceeded to attack and wipe out the settlement. In addition to these calamities, the patroons then quarreled and dissolved their partnership. They sold the land back to the company government in 1634 for a handsome 15,000 guilders. The first patroonship in New Netherland had proved to be a failure.

The second patroonship was also a failure. Michael Pauw, another of the grasping company directors, managed to obtain a grant for himself of the area that now includes Hoboken, Jersey City, and the whole of Staten Island. Pauw called his colony Pavonia, which he organized on the site of Jersey City for a few years. The Indians, however, proved troublesome and the patroonship was losing money, and so in 1637 Pauw sold the land back to the obliging company for 26,000 guilders (land, of course, that the company had originally granted Pauw as a gift).

The first successful patroonship — and the only one that continued past the demise of New Netherland and through the 18th century — was the grant to yet another Amsterdam Chamber director, the wealthy jeweler Kiliaen van Rensselaer. Van Rensselaer's domain, Rensselaerswyck, prospered because of superior management and because its area was strategically located for fur trade with the Iroquois. It included virtually the entire area around Albany (now Albany and Rensselaer counties) except Fort Orange itself, which remained the property of the company government.

Immediately there began conflicts between the Hudson River patroons and the government. For the patroons began to ignore the Dutch West India company's legal monopoly of the highly lucrative fur trade, and the company began to tighten its regulations to enforce its monopoly. The patroons' illegal fur trade not only endangered the company monopoly; it also led them to concentrate on furs rather than encourage a large agricultural population, which the company government was now trying to foster. As a consequence, Peter Minuit was fired as director general by the company in 1632, on charges of being too soft on the patroons.