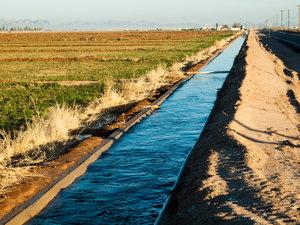 California Governor Jerry Brown has announced that private citizens and small businesses — among others — will have their water usage restricted, monitored, and subject to heavy fines if state agents determine that too much water has been used. Noticeably absent from the list of those subject to restrictions are the largest users of water, the farmers.

Agriculture accounts for 80 percent of the state’s water consumption, but 2 percent of the state’s economy. To spell it out a little more clearly: Under Jerry’s Brown water plan, it’s fine to use a gallon of subsidized water to grow a single almond in a desert, but if you take a shower that’s too long, prepare to be fined up to $500 per day.

There Is No Market Price for Water

The fact that the growers, who remain a powerful interest group in California, happen to be exempt from water restrictions reminds us that water is not allocated according to any functional market system, but is allocated through political means by politicians and government agents.

When pressed as to why the farmers got a free pass, Jerry Brown was quick to fall back on the old standbys: California farms are important to the economy, and California farms produce a lot of food. Thus, the rules don’t apply to them. If translated from politico-speak, however, what Brown really said was this: “I have unilaterally decided that agriculture is more important than other industries and consumers in California, including industries and households that may use water much more efficiently, and which may be willing to pay much more for water.”

In California, those who control the political system have ensured that water will not go to those who value it most highly. Instead, water will be allocated in purely arbitrary fashion based on who has the most lobbyists and the most political power.

Numerous economists at mises.org and elsewhere (see here and here and here) have already pointed out that the true solution to water shortages lies in allowing a market price to determine allocation — and in allowing there to be a market in water — just as there is a market in energy, food, and other goods essential to life and health. Supporters of government-controlled water claim that billionaires will hoard all the water if this is allowed, although it remains unclear why the billionaires haven’t also hoarded all the oil, coal, natural gas, clothing, food, and shoes for themselves, since all of these daily essentials are traded using market prices, and all are used daily by people of ordinary means.

For a clue as to how divorced from reality is current water policy in California, we need only look at the government-determined “price” of water there. Even under current conditions, water remains very inexpensive in California, but for the record, city dwellers have historically paid much, much higher prices for water than growers.

For example, according to this study, water for residents of San Francisco rose by 50 percent from 2010 to 2014, but residents were still paying about 0.8 cents per gallon for water. In Los Angeles, the price growth was a little less over the same period, but the Los Angeles price was also low, coming in a little over 0.6 cents per gallon. City dwellers are told that water is incredibly scarce, but as Kathryn Shelton and Richard McKenzie have noted, the price of water is so low that virtually no one even knows the per-gallon price.

But how much do growers pay for their water? In a recent LA Times article contending that growers “aren’t the water enemy,” it was noted that growers are now paying $1,000 per acre foot. This is supposed to convince us that water prices are incredibly high. But how does this compare to city prices? An acre-foot is about 326,000 gallons of water, so if we do the arithmetic, we find that growers who pay $1,000 for an acre-foot are paying about 0.3 cents per gallon for their water. That’s a little less than half as much as the city users are paying.

Now, city water is treated potable water, so we might expect a premium for city water. Historically, however, the gap between city prices and agricultural prices is much, much greater. Bloomberg notes that as of 2014, the price of water had risen to $1,100 “from about $140 a year ago” in the Fresno area. Going back further, we find that in 2001 many farmers were paying $70 per acre foot. Prices well below $1,000 are far more typical of the past several decades than the $1,000 to $3,000 per acre-foot many growers now say they pay. In fact, if we see what the per-gallon price would be for a $140 acre-foot of water, we find that a city dweller could use fifty gallons per day at a monthly price of 64 cents per month, or a per-gallon price of 0.04 cents.

At prices like these, it is no wonder that there is now a shortage of water. The price of water has for years been sending the message that water is barely a scarce resource at all.

In many cases, the low prices are enabled by decades of taxpayer subsidization of water infrastructure. A year round flow of water to both cities and growers is ensured in part by huge New Deal-era projects like Shasta Dam, and Hoover Dam, which the State of California could not afford to build, but which today California largely relies upon for water, care of the US taxpayer.

In central and northern California, the primary beneficiaries of federal water projects are growers, although it’s the city dwellers, who use a relatively small amount of water, who get lectured about conserving water. Were an actual market in water allowed, however, growers would have to compete for water with city dwellers, whose industries are far more productive than agricultural enterprises and who are likely to be willing to pay higher prices. Even when the private sector owners of water are old farming families (a legacy of prior appropriation), the water would still tend to go to those who value it the most as reflected in the per-unit prices they are willing to pay. That is: city dwellers

What Will We Do Without California Growers?

The fact remains that much California farmland is in a desert where it rains under twelve inches per year. Massive irrigation projects have made farming economical in the region, but it’s unlikely that the status quo can continue forever if California dries up and cities begin to compete for more water.

When crops like pecans, which are native to Louisiana where it rains over fifty inches per year, are being grown in central California, we will have to ask ourselves if there is true comparative advantage at work here, or if the industry is really sitting upon a shaky foundation of government-subsidized and -allocated resources.

The rhetoric that’s coming out of the growers, of course, is that California growers are essential to the American food supply. Some will even suggest that it’s a national security issue. Without California growers, we’re told, we’ll all starve in case of foreign embargo.

But let’s not kid ourselves. North America is in approximately zero danger of having too little farmland for staple crops. In fact, one can argue that some of the best farmland in the world — in Iowa for instance — is underutilized because policies like Jerry Brown’s farm favoritism send the message that California will prop up its desert agriculture no matter what.

No, if California farmland continues to go dry, this only means that Americans will have to turn to other parts of the US or imports. After all, many of the crops grown in dry parts of California are much more economically grown in more humid environments, including citrus plants, avocadoes (which are native to Mexico), and various tree nuts. And of course, it’s these crops, which are already fairly expensive and water-intensive that get mentioned when we’re told that California growers must be given what they want until the end of time. This will likely mean higher prices for some of these crops in the short run, the correct response is not government favoritism, but free trade, and letting comparative advantage work. In a world with market prices, it’s simply not economical to grow everything under the sun in the California desert. If markets were allowed to function, with real water prices and free trade, this would quickly become abundantly clear.