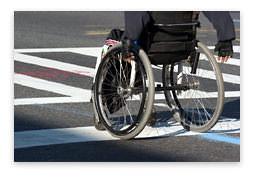 Consider that employment among disabled people had reached a high in 1989, after years of economic expansion, rising in compassion for the disabled, and advances in technology that permitted their more thorough integration into the workforce. Then something awful happened: the government granted the disabled special rights (the ADA) and thereby made them more expensive and dangerously litigious to hire. What followed was a human rights disaster: the longest slide in disabled employment ever recorded, according to five different measures used to record unemployment among the disabled.

Disability lobbyists have done their best to wriggle out of the uncomfortable conclusion that their greatest achievement turns out to be the worst enemy ever confronted by persons with disabilities. But in the real world, disabled people sense it, anytime an employer tenses up when a disabled person applies for a job. The watchword used to be charity. Now it is fear. Neither is it good for the self-esteem of a disabled person to know that they are regarded as a threat and a potentially expensive legal time bomb.

Yet the precedent was established and no one seems to be able to think outside the box. A scene from the theater of the absurd: the US Supreme Court has heard a case concerning whether the Americans With Disabilities Act applies to foreign cruise ships porting in US harbors. It seems that some disabled people sued a Norwegian company because it discriminated against them. The case was batted around several courts until it landed in the hands of America's own Wizards of Oz, as if anyone can unweave such a tangled web of nonsense.

You can guess where the Departments of Justice and Transportation stand on the question. Let's just say that deferring to foreign countries, declining to accumulate power, or being humble in the face of conflicting laws, are not exactly fashionable virtues in DC these days. So there you go: Washington is utterly convinced of the need to apply the ADA here, there, and everywhere.

A cruise liner from any country has every incentive to keep its passengers happy, particularly disabled passengers, who make up a disproportionate percentage of its customers. The idea that there needs to be a special law that says "don't you dare treat people badly" makes no sense; in any case, if such a law were consistently applied, we can readily imagine that the government itself, not exactly known for great customer relations, would be in a heap of trouble.

Of course, this point is a case not just against applying the ADA to foreign ships, but having an ADA at all. This I readily grant. The whole assumption of this law that private enterprise is conspiring to shut out disabled people makes no sense, especially when you consider the forces of competition (which lead enterprise to never pass up a good customer or laborer) and the impulse of human compassion (the disabled population can count on good will that extends beyond capitalist motivations).

The ADA has somehow managed to brand every disabled person as a pariah, made them more expensive to hire, and caused the truly disabled to experience even more discrimination relative to the less disabled. The law itself has mandated vast amounts of physical configurations of every building to public access with nary a thought to the relationship between cost and benefit.

So if we were thinking rationally, we wouldn't just refuse to apply the ADA to foreign ships. We would repeal the whole act forthwith. If you find that thought to be an appalling heresy against all decency and good will, consider that this act was only passed in 1989, so we aren't exactly talking about the Apostles Creed. If you find the thought of repeal shocking, you might examine the extent to which your definition of political orthodoxy is fully under the control of the present regime.

What's more, the assumption that foreign ships picking people up and letting them off in the US should have to obey every jot and tittle of US law is an extreme imperialist idea. It's the US government saying: if you have commercial relations with any US citizen, you are thereby brought under the US code and jurisdiction. As Ruth Bader Ginsburg indignantly asked the lead attorney for the plaintiffs: "You are in effect saying, 'The US rules the world.' No matter what the other ports say, US law is going to govern."

It's true that the American civic religion somehow approves of the idea that all American laws ought to be exported to the world by fair means or foul, and that most Americans do not care in the slightest about the plight of suffering Norwegian yacht companies. Even so, there is something un-American (think 18th century here) about the proposition that the US must dictate every last regulation to every last institution that has any commercial engagement with our country.

One can only imagine the outrage if Norway demanded that US ships dropping people off or picking people up had to pay triple the minimum wage or offer a lifetime supply of toothpaste and soda water or whatever other kinds of welfare benefits are available to all in Norway.

We can make light of these kinds of intervention, but the truth is that they are very unsporting. They bring about conflicts between nations and make the world less friendly and cooperative. They even bring about wars and bloodshed. It is a good principle of government that its laws should pertain only to its own citizenry in the geographically relevant area and none other.

What the Court will do is rule based on their personal opinions, which are no better than yours or mine, and back it up with loads of belligerent language, qualifications, and footnotes to precedents of which they personally approve. Why these people rule has nothing to do with their wisdom. It is due solely to their power. And if you think about the level of silly back and forthing that goes on in these Supreme Court hearings, you can get the sense that they know far less about the Constitution than the local high-school civics teacher. Truly, they sometimes seem to be making it up as they go along.

As to where the justices will come down on this case, that is anyone's guess. Is it right wing to demand that foreign ships obey the US and do our bidding or is it right wing to be skeptical of regulatory overreach? Is it left wing to doubt the merit of US imperial impositions or to favor the compassionate use of law to assist the least among us and protect them from exploitation? None of it makes any sense any more.

There is no more coherence in the age of welfare-warfare imperialism. The Court is as likely to do the right thing as disability lobbyists are likely to call for the repeal of their crown jewel. So the justices, just like the lawyers and the government itself, just keep keeping on. Bash private enterprise even at the expense of those it serves the best? Sure. That's what you do when your most damaging and dangerous disability is ideological blindness.