GET NEWS AND ARTICLES IN YOUR INBOXPrint
A
A
Home | Mises Library | Does Military Defense Require Large States? 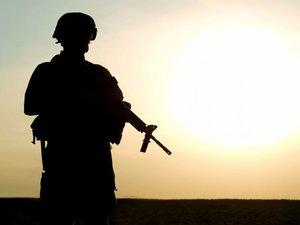 Earlier this year, Lithuania reinstituted the military draft, which the Lithuanian state claimed was in response to threats from Russia. Ukraine has also recently reinstituted the draft, with mixed political results, and for similarly stated reasons.

Regardless of how one gauges the magnitude of Russian aggression, the problem faced by small states like Lithuania is an important one.

How can a small state with a small population — and thus a small military — ever hope to defend itself against a much larger state?

This is an important question for libertarians especially, since, as Hans-Hermann Hoppe has noted, if we must have states, a system of small, independent states (i.e., Monaco, Lichtenstein, Luxembourg, and arguably Switzerland) is much more ideal than a system of medium-sized or large states.

As illustrated here and here, we find that small states are less able to impose strong coercive state monopolies since small states face greater competition from surrounding states, and the more abusive states (if small) are at greater risk of losing their most productive citizens to emigration. Thus, small states have an incentive to pursue more laissez-faire policies.

The natural implication of this is that libertarians and other proponents of laissez-faire should seek a world of small states through secession, or through radical decentralization which leads to de facto local autonomy.

In response to this, opponents of secession and decentralization claim that only large and strong states can provide adequate military defense in the face of illiberal and large foreign regimes. “We can reduce the Americas and Europe to regions of small, weak states,” they may say, “but that would leave them defenseless against domination by some future equivalent of China, or Russia, or the United States.”

But are small states really defenseless?

War-making is an expensive and capital-intensive endeavor. Ironically, some of the most warlike states often have their genesis in relatively laissez-faire economies (e.g., those of the American and Imperial British economies) because those economies are able to provide more tax revenue.

The other side of coin, however, is the fact that wealthier societies have a greater ability to defend themselves from aggressors. Wealthier societies can afford important and expensive armaments such as anti-aircraft defenses and related defensive technologies. They can afford to pay for specialized highly-trained troops instead of resorting to a 100-percent conscription tax on people with no particular skill for soldiering. Wealthier societies can also more easily obtain nuclear weapons technology which has clearly been shown to deter war-making by large aggressive states.

Also, wealthier societies can buy defense from neighbors in a variety of other ways. They can employ foreign mercenaries, and they can simply bribe unfriendly foreign regimes. Potential foreign aggressors will also be reluctant to bomb wealthy foreign cities that are sources of lucrative trade and investment.

And finally, in a wealthier society, residents at an individual and small organizational level, are more capable — if the state permits it — of arming themselves, which has the effect of adding another layer of resistance to foreign aggression.

The Advantages of Decentralization

This latter advantage of economic wealth brings us to the tactical advantages of political and military decentralization. Hoppe writes:

As a monopolist of ultimate decision-making, the state decides for everyone bindingly whether to resist or not; if to resist, whether in the form of civil disobedience, armed resistance or some combination thereof; and if armed resistance, of what form. If it decides to put up no resistance, this may be a well-meaning decision or it may be the result of bribes or personal threats by the invading state — but in any case, it will certainly be contrary to the preferences of many people who would have liked to put up some resistance and who are thus put in double jeopardy because as resisters they disobey now their own state as well as the invader.

On the other hand, if the state decides to resist, this again may be a well-meaning decision or it may be the result of pride or fear — but in any case, it too will be contrary to the preferences of many citizens who would have liked to put up no resistance or to resist by different means and who are entangled now as accomplices in the state’s schemes and subjected to the same collateral fallout and victor’s-justice as everyone else.

The reaction of a free territory is distinctly different. There is no government which makes one decision. Instead, there are numerous institutions and individuals who choose their own defense strategy, either independent of or in cooperation with others, each in accordance with one’s own risk assessment. Consequently, the aggressor has far more difficulties gathering information and conquering the territory. It is no longer sufficient to “know” the government, to win one decisive battle or to gain control of government headquarters from where to transmit orders to the native population. Even if one opponent is “known,” one battle is won or one defense agency defeated, this has no bearing on others.

Moreover, the multitude of command structures and strategies as well as the contractual character of a free society affect the conduct of both armed and unarmed resistance. As for the former, in state-territories the civilian population is typically unarmed and heavy reliance exists on regular, tax-and-draft-funded armies and conventional warfare. Hence, the defense forces create enemies even among its own citizenry, which the aggressor state can use to its own advantage, and in any case there is little to fear for the aggressor once the regular army is defeated. In contrast, the population of free territories is likely heavily armed and the fighting done by irregular militias led by defense professionals and in the form of guerilla or partisan warfare. All fighters are volunteers and all of their support: food, shelter, logistical help, etc. is voluntary. Hence, guerrillas must be extremely friendly to their own population. But precisely this: their entirely defensive character and near-unanimous support in public opinion can render them nearly invincible, even by numerically far superior invading armies. History provides numerous examples: Napoleon’s defeat in Spain, France’s defeat in Algeria, the U.S. defeat in Vietnam, Israel’s defeat in South Lebanon.

Rothbard explored these same themes in his work on the American Revolution, in which he noted the essential role of guerilla warfare in that conflict. Simultaneously during the war, the “United States” functioned as a group of independent states that had come together for the purposes of collective defense. The coalition was successful against the most powerful state of the era, and the Americans states remained de facto independent small entities, even if they functioned internationally under a single diplomatic banner.

Consequently, we find that effective military defense does not necessitate a centralized state or political unity. There is no compelling reason to believe that had there been twenty or thirty colonies instead of thirteen, that the outcome or conduct of the war on the side of the Americans would have been any different.

These facts remain relevant even today since other regions of the world could take advantage of the same dynamics, were they able to overcome their commitments to nationalism and authoritarianism. For example, if Lithuania were serious about military defense, it might look to the fact that the former states of the Soviet Bloc, from Estonia to Bulgaria (not including the former SSRs, such as Ukraine), have a combined population of over 100 million people and populations spread out over a large area. In other words, the region has the potential to mount a credible and effective military defense to foreign invaders through decentralized, collective defense.

Defensive military capability would also be greatly enhanced by a commitment to economic growth through deregulation and laissez-faire. Not surprisingly, though, most of the states of the region are unwilling to free their economies from government intervention. At the same time, those same states are committed to disarming the local populations and centralizing military capability while palming off their defense costs on the American taxpayer via NATO. That is, they remain committed to old models of state defense that have failed them spectacularly in the past.

The region (like most of the world) remains mired in the idea that a centralized state and a defenseless private sector are the best option for defense. The number of privately owned-firearms in Bulgaria, for example, is six guns per 100 people. In Poland, the number is 1.3 private guns per 100 people. There are even fewer private guns in Lithuania (0.7 per 100), which has decided that enslaving young men via conscription is better than letting citizens have guns. When we compare these numbers to gun ownership in Switzerland, which has a rate of forty-five guns per 100 people (the rate is eighty-eight per 100 in the United States), it becomes abundantly clear that the regimes of eastern Europe are not serious about any type of military defense that does not prioritize protecting the state’s monopoly of coercion over its own citizens.

Economics, size, and the quality of war materiel all matter, but none of these factors can overcome the power of ideology. Hoppe writes:

[H]ow is one to explain, for instance, that France has not long ago conquered Monaco, or Germany Luxemburg, or Switzerland Liechtenstein, or Italy Vatican City, or the U.S. Costa Rica? Or how is one to explain that the U.S. does not “finish the job” in Iraq by simply killing all Iraqis. Surely, in terms of population, technology and geography such are manageable tasks.

The reason for these omissions is not that French, German, Swiss, Italian or U.S. state rulers have principled moral scruples against conquest, occupation, expropriation, confiscation, enslavement and the imprisonment or killing of innocents — they do these things on a daily basis to their “own” population. ... [W]hat constrains the conduct of state rulers and explains their reluctance to do things that appear feasible from a “technical” point of view is public opinion, domestically, but also abroad.

As La Boétie, Hume, Mises, Rothbard have explained, government power ultimately rests on opinion, not brute force. Bush does not himself kill or put a gun to the head of those he orders to kill. Generals and soldiers follow his orders on their own. Nor can Bush “force” anyone to continue providing him with the funds needed for his aggression. The citizenry must do so on its own, because it believes that, by and large, it is the right thing to do. On the other hand, if the majority of generals, soldiers and citizens stop believing in the legitimacy of Bush’s commands, his commands turn into nothing more than hot air.

Ultimately, no governmental structure can prevent war if the prevailing ideology is one that prefers violence to peace and nationalism to international laissez-faire. Likewise, Sweden and Norway (for example) no longer come to blows, not because peace is imposed on them by NATO or the US, but because the people of the region view war as an untenable option. There is peace (for now) throughout most of the West because few of the productive taxpaying citizens of the West are inclined to make war on other citizens of the West. This is an ideological triumph, not a military one.