GET NEWS AND ARTICLES IN YOUR INBOXPrint
A
A
Home | Mises Library | Do We Need a Weak Dollar?

Do We Need a Weak Dollar? 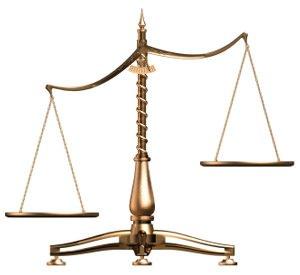 Last week I testified before a Congressional subcommittee on the Fed's role in rising gasoline prices. All of the economists on the panel agreed that oil prices were rising (partly) because of the dollar's fall against other currencies. However, Dean Baker — prominent Keynesian pundit and codirector of the Center for Economic and Policy Research — testified that the dollar's fall was inevitable, and even a good thing in light of the US trade deficit.

At the time, I knew I disagreed with Baker, but I didn't get a chance to explain why. A few days later, while working on the Mises Institute's study guide to The Theory of Money and Credit, I was amazed to discover that Mises had devoted an entire section to this very issue.

As Mises's analysis makes clear, an "unfavorable balance of trade" isn't a good argument for weakening the currency. This fact is important because Mises was recommending the currency be tied to a precious metal such as gold, which in turn implies fixed exchange rates against all other currencies that are likewise tied to gold. The crucial point is that trade flows are self-regulating in such a system. The gold standard still "works" even for a country running a large trade deficit.

Mises goes further still, and points out that even for a country with a fiat money, trade balances are not facts of nature to which the exchange rate must adapt. A central bank's monetary policies affect domestic prices, which in turn influence trade flows. Contrary to Dean Baker's assertions, Mises's analysis shows that policy makers today don't have to choose between a high trade deficit and high oil prices. A return to sound money would reduce both.

To set the context, the reader should watch a few minutes of the testimony starting at the 50:00 mark. The chair of the subcommittee, Republican Jim Jordan, tries to back Baker into a corner regarding his earlier statement about the dollar. Here's the relevant exchange:

BAKER: In effect, by having a large trade deficit, which is associated with an overvalued dollar, we're subsidizing our consumption of oil and all imports, and paying for that with money that we've borrowed from foreigners.

JORDAN: Which raises the question, do you think rising fuel costs are a good thing?

BAKER: I think that they're an inevitable thing.

Later in the hearing Baker said, "When you look at trying to rebalance the economy, the only way I see to do that in the long-term involves net exports, which involves a falling dollar. I don't know any other way to do that."

"Mises's analysis shows that policy makers today don't have to choose between a high trade deficit and high oil prices."

Baker's analysis is conventional; I don't mean to single him out for criticism. In a world of floating exchange rates, where the dollar's price against the euro, yen, etc., is constantly moving, many economists would instinctively say that the "solution" to an unsustainably high trade deficit is a weaker dollar.

After all, a trade deficit occurs when Americans collectively spend more on goods imported from abroad than foreigners spend on goods exported by American producers. If the dollar falls against other currencies, other things equal, American-made goods will suddenly appear cheaper, while foreign goods will become more expensive. Thus, American consumers will switch some of their purchases away from foreign goods and will "buy American," while foreign consumers will import more goods made in the USA as well. The result will be a shrinking trade deficit.

There's nothing wrong with this analysis, as far as it goes. What is surprising is Dean Baker's statement, "I don't know any other way to do that [i.e., reduce the trade deficit]." As Mises will explain, the other option is for the currency to retain its strength while domestic prices directly fall. This isn't simply a theoretical possibility, either; it's in fact the route I would recommend in the present environment, as opposed to Dean Baker's complaisance with the steadily eroding dollar (and the higher commodity prices it implies). 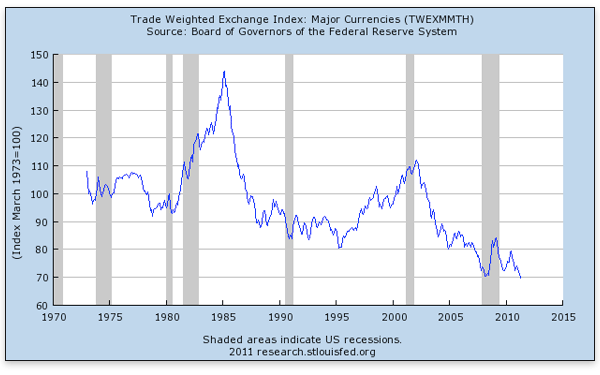 The above chart shows that on an index tied to other major currencies, the US dollar is now at the lowest level since the series began in 1973. (Different indices show steep declines in the last ten years but do not put the dollar at historic lows.) The question for policy makers becomes, Is this eroding dollar inevitable, as Dean Baker suggests? Mises argued no a century ago.

As I noted in the opening of this article, after I returned home from my trip to Washington I resumed working on the study guide to Mises's Habilitation dissertation, The Theory of Money and Credit, originally written in 1912. With Dean Baker's remarks fresh in my mind, I was pleasantly surprised to see that Mises devoted an entire section of the book (pp. 249–52) to the issue. He begins,

According to the current view, the maintenance of sound monetary conditions is only possible with a "credit balance of payments." A country with a "debit balance of payments"1 is supposed to be unable permanently to stabilize the value of its money; the depreciation of the currency is supposed to have an organic basis and to be irremediable except by the removal of the organic defects. (p. 249)

To demonstrate that a so-called negative trade balance can be turned around without depreciating a nation's currency, Mises breaks the problem into two parts. First, he goes over the obvious scenario where a nation is using actual metal, such as gold coins, as the money. In that case, the excess of imports over exports (and here we are including even investment flows, not just merchandise trade) would mean a net outflow of gold coins from the country. Then "the tightness in the domestic market called forth by the efflux of part of the stock of money reduces the prices of commodities, and so restricts importation and encourages exportation."

Because currency exchange can be a particularly difficult topic, Mises's insight is most easily seen in a world in which there are no domestic currencies at all. Rather, suppose the people of the United States, Britain, Europe, and so on all carry actual gold coins as money, and that the prices in all countries are quoted not in dollars and pounds, but in grams or ounces of gold.

In such a world, if Americans spent more (counting goods and assets) on foreign items than vice versa, then the amount of physical gold in the possession of Americans would fall, barring the production of gold from mines. In other words, on net gold would leave the country. But with a lower stock of gold domestically, the demand for American goods and services would fall, so that their prices (quoted in grams or ounces of gold) would fall too.

The opposite would occur in the countries to which the gold had been flowing. The residents of those countries would see their stockpile of cash (which is gold in this scenario) growing, and they would be able to bid more on goods and services in their countries. They would see rising prices, quoted in gold.

Eventually, American goods would be so cheap relative to foreign goods that the trade flows would reverse. Foreigners would start spending more on American exports than Americans were spending on foreign imports. The net drain on US gold stocks would come to a stop, and perhaps reverse. This entire process is referred to as David Hume's price-specie flow mechanism.

This simple example, though based on an unrealistic assumption of countries all using gold as money, shows what was wrong in Dean Baker's thinking. A trade deficit need not reverse itself through the depreciation of a country's currency relative to others. In our example, all the countries used gold, so there was no question of one currency falling. In fact, since prices (quoted in gold) fell in the United States in our example, if anything we would say that Americans saw their money's purchasing power go up because of the original balance of payments deficit.

Extending the Argument to Fiat Money

Mises himself goes on to extend his argument to handle countries with currencies that are not tied to the precious metals:

When a country has substituted credit money or fiat money for metallic money … it is often asserted that the balance of payments determines the rate of exchange. But this also is a quite inadequate explanation. The rate of exchange is determined by the purchasing power possessed by a unit of each kind of money; it must be determined at such a level that it makes no difference whether commodities are purchased directly with the one kind of money or indirectly, through money of the other kind. … The balance-of-payments theory forgets that the volume of foreign trade is completely dependent upon prices; that neither exportation nor importation can occur if there are no differences in prices to make trade profitable. (p. 250)

This is a quintessentially "Austrian" point about individual prices, as opposed to Baker's Keynesian focus on aggregate trade figures. To the extent that one agrees that US trade deficits are unsustainable,2 it is simply not true that a weaker dollar is the only solution. On the contrary, falling US prices could work just as well, because that too would make US goods more attractive to foreign buyers.

The Distortionary Impact of Fed Inflation

If pressed, I imagine Dean Baker would agree with Mises's analysis as far as it goes. But he would probably object that the worst thing for our depressed economy right now is falling prices. After all, that was the whole reason Ben Bernanke has injected more than a trillion dollars into the financial sector since the crisis really set in — he was trying to avoid the dreaded (price) deflation.

And thus we see that the modern Keynesians — whether on the "left" like Dean Baker or even on the right like Greg Mankiw — are trapped by their own policy recommendations. My testimony at that hearing (written version here) summarized the ways in which Bernanke's inflationary policies themselves have fuelled skyrocketing commodity prices, and hence (ironically) a growing trade deficit as Americans spent more on oil imports.

More generally, America's special place as issuer of the world's reserve fiat currency is partly to blame for its decades of trade deficits, though the issue is nuanced. If the United States returned to a sound currency — either with the dollar linked back to gold or, better yet, getting the government out of money and banking altogether — then all of these alleged "imbalances" would solve themselves.

In closing I can do no better than to quote once again from Mises:

"No country … need abandon the hope of sound currency conditions. It is not the poverty of individuals and the community, not the indebtedness to foreign nations, not the unfavourableness of the conditions of production, that force up the rate of exchange, but inflation." (pp. 251–252)