GET NEWS AND ARTICLES IN YOUR INBOXPrint
A
A
Home | Mises Library | Do Central Banks Really Inflate? No, Say the Post-Keynesians

Do Central Banks Really Inflate? No, Say the Post-Keynesians 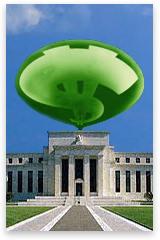 According to traditional economics textbooks, the current monetary system amplifies initial monetary injections of money. The popular story goes as follows: if the central bank injects $1 billion into the economy, and banks have to hold 10% in reserve against their deposits, this will cause the first bank to lend 90% of this $1 billion. The $900 million in turn will end up with the second bank, which will lend 90% of the $900 million. The $810 million will end up with a third bank, which in turn will lend out 90% of $810 million, and so on.

Consequently the initial injection of $1 billion will become $10 billion, i.e., money supply will expand by a multiple of 10. Note that in this example the central bank has actively initiated monetary pumping of $1 billion, which in turn banks have expanded to $10 billion.
But does all this make much sense given that the central banks in the world today don't target money supply but rather set targets for the overnight interest rate like the federal funds rate in the United States and the call rate in Japan? Additionally, in some economies like Australia banks are even not compelled to hold reserves against their deposits. Surely then the entire multiplier model in the economics textbooks must be suspect.

Indeed economists from the post-Keynesian school of economics (PK) have expressed doubt about the validity of the popular framework1. In the present monetary framework, it is held that the job of the central bank is to ensure that the level of cash in the money market is in tune with the interest-rate target.

For instance, if on a particular day the government intake of cash exceeds outlays, this leads to a deficiency of cash on that day. To prevent a scramble for cash in the money market and a subsequent increase in the overnight interest rate, the central bank must inject an appropriate amount of cash in order to keep the interest rate at the target. Note that the central bank here is performing a balancing act, or so it is held.

The PK school of thought maintains that, as opposed to the popular money multiplier model, central banks do not actively pursue monetary pumping to influence various economic data in the economy; as we have seen, the central bank is just aiming at keeping the money market well balanced.

In fact, it is held, the textbook multiplier story is an impossible fiction. They claim that the pumping of cash reserves by the central bank in order to raise the pace of credit expansion will create excess reserves, which in turn will push the overnight interest rate to zero almost instantly.

The supply of loans, in this way of thinking, is never independent of demand — banks supply loans only because someone is willing to borrow bank money by issuing an IOU to a bank. To conclude, then, according to this way of thinking, the driving force of bank-credit expansion and thus money-supply expansion is the increase in the demand for loans and not the central bank as the money multiplier model presents.

Is the Money Multiplier a Myth or Reality?

Superficially it does make sense to conclude that central bank policies are of a passive nature: the central bank just aims at keeping the money market in balance. A careful investigation of all this does, however, reveal that the central bank's so-called passivity is just a spurious label. In reality, central banks are very far from being passive. In fact without the central bank being active it would be impossible for banks to expand lending and set the multiplier process (the creation of credit out of "thin air") in motion.

Let us say that for whatever reason banks are experiencing an increase in the demand for loans. Also, let us assume that the supply of loanable funds is unchanged. According to PK, banks will oblige this increase. The demand-deposit accounts of the new borrowers will now increase. Obviously the new deposits are likely to be employed in various transactions. After some time elapses, banks will be required to clear their checks and this is where problems might occur. Some banks will find that to clear checks they are forced either to sell assets or to borrow the money from other banks (remember the pool of loanable funds stays unchanged).

Obviously, all this will put an upward pressure on money market interest rates and in turn on the entire interest-rate structure. Higher interest rates in turn are likely to force marginal borrowers "out of the game." Also, some banks will go belly up as a result of not being able to honor their checks. Ultimately this will put downward pressure on bank lending, which in turn will offset the initial expansion in credit.

It follows then that the so-called multiplier, or the expansion of credit out of "thin air" cannot emerge in its own right without the support from the central bank.

If the multiplier process requires the support of the central bank then one can infer that, in a free market without the central bank, the likelihood of such a process emerging is not very high.

In a free market, if a particular bank tries to expand credit without backup from a genuine lender — i.e., practicing fractional-reserve banking — it runs the risk of not being able to honor its checks, which raises the risk of bankruptcy.

Also, it must be realized that in a free market, we should expect that the likelihood of a bank being "caught" practicing fractional-reserve banking is going to be high, as there are many competitive banks. As the number of banks rises and the number of clients per bank declines the chances that clients will spend money on the goods of individuals that are banking with other banks will increase. This in turn raises the risk of a bank that is practicing fractional-reserve lending of not being able to honor its checks.

In a free market then, without the central bank, the fact that banks must clear their checks is likely to be a sufficient deterrent to the practice of fractional-reserve banking.

We can thus conclude that it is irrelevant for the multiplier process whether the central bank targets the quantity of money or the interest rate. What matters here is that the central bank is always ready to accommodate commercial banks' expansion of credit out of thin air. Without the central bank's support the likelihood of a sustained multiplier process taking place is close to nil. Hence the notion of the money multiplier is not applicable to a truly free-market economy. Additionally, in a fractional system, money that is created out of nothing can also disappear just as quickly, and this sets in motion serious disruptions to economic activity.