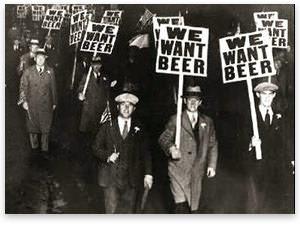 12/27/2011Ludwig von Mises
"The objective of prohibition was to encroach upon the individuals' freedom to spend their dollars and to enjoy their lives according to their own fashion."

In investigating the economic problems of interventionism we do not have to deal with those actions of the government whose aim it is to influence immediately the consumer's choice of consumers' goods. Every act of government interference with business must indirectly affect consumption. As the government's interference alters the market data, it must also alter the valuations and the conduct of the consumers. But if the aim of the government is merely to force the consumers directly to consume goods other than what they would have consumed in the absence of the government's decree, no special problems emerge to be scrutinized by economics. It is beyond doubt that a strong and ruthless police apparatus has the power to enforce such decrees.

In dealing with the choices of the consumers we do not ask what motives induced a man to buy a and not to buy b. We merely investigate what effects on the determination of market prices and thereby on production were brought about by the concrete conduct of the consumers. These effects do not depend on the considerations which led individuals to buy a and not to buy b; they depend only on the real acts of buying and abstention from buying. It is immaterial for the determination of the prices of gas masks whether people buy them of their own accord or because the government forces everybody to have a gas mask. What alone counts is the size of the demand.

Governments, which are eager to keep up the outward appearance of freedom even when curtailing freedom, disguise their direct interference with consumption under the cloak of interference with business. The aim of American prohibition was to prevent the individual residents of the country from drinking alcoholic beverages. But the law hypocritically did not make drinking as such illegal and did not penalize it. It merely prohibited the manufacture, the sale and the transportation of intoxicating liquors, the business transactions which precede the act of drinking. The idea was that people indulge in the vice of drinking only because unscrupulous businessmen prevail upon them. It was, however, manifest that the objective of prohibition was to encroach upon the individuals' freedom to spend their dollars and to enjoy their lives according to their own fashion. The restrictions imposed upon business were only subservient to this ultimate end.

The problems involved in direct government interference with consumption are not catallactic problems. They go far beyond the scope of catallactics and concern the fundamental issues of human life and social organization. If it is true that government derives its authority from God and is entrusted by Providence to act as the guardian of the ignorant and stupid populace, then it is certainly its task to regiment every aspect of the subject's conduct. The God-sent ruler knows better what is good for his wards than they do themselves. It is his duty to guard them against the harm they would inflict upon themselves if left alone.

Self-styled "realistic" people fail to recognize the immense importance of the principles implied. They contend that they do not want to deal with the matter from what, they say, is a philosophic and academic point of view. Their approach is, they argue, exclusively guided by practical considerations. It is a fact, they say, that some people harm themselves and their innocent families by consuming narcotic drugs. Only doctrinaires could be so dogmatic as to object to the government's regulation of the drug traffic. Its beneficent effects cannot be contested.

However, the case is not so simple as that. Opium and morphine are certainly dangerous, habit-forming drugs. But once the principle is admitted that it is the duty of government to protect the individual against his own foolishness, no serious objections can be advanced against further encroachments. A good case could be made out in favor of the prohibition of alcohol and nicotine. And why limit the government's benevolent providence to the protection of the individual's body only? Is not the harm a man can inflict on his mind and soul even more disastrous than any bodily evils? Why not prevent him from reading bad books and seeing bad plays, from looking at bad paintings and statues and from hearing bad music? The mischief done by bad ideologies, surely, is much more pernicious, both for the individual and for the whole society, than that done by narcotic drugs.

These fears are not merely imaginary specters terrifying secluded doctrinaires. It is a fact that no paternal government, whether ancient or modern, ever shrank from regimenting its subjects' minds, beliefs, and opinions. If one abolishes man's freedom to determine his own consumption, one takes all freedoms away. The naïve advocates of government interference with consumption delude themselves when they neglect what they disdainfully call the philosophical aspect of the problem. They unwittingly support the case of censorship, inquisition, religious intolerance, and the persecution of dissenters.

This article is excerpted from chapter 27 of Human Action (1949).