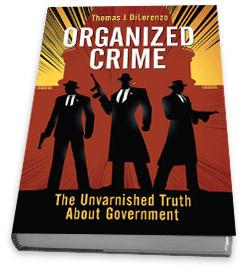 Thomas DiLorenzo is probably best known to the public for his revisionist studies of Lincoln, but he has a wide range of economic and historical interests.1 Organized Crime, a collection of 52 short articles by him, shows again and again his keen eye for the striking historical detail that exactly illustrates the point he wants to make.

It will come as no surprise to readers of the Mises Daily that price control does not work. But DiLorenzo still manages to come up with an unexpected point about this familiar topic. The Nazi leader Hermann Goering warned the American occupation authorities that they stood in danger of repeating the mistakes of his own recently fallen regime. Speaking to the American correspondent (and, by the way, later American Ambassador to Switzerland) Henry Taylor, Goering said,

Your America is doing many things in the economic field which we found out caused us so much trouble. You are trying to control peoples' wages and prices — peoples' work. If you do that you must control peoples' lives. And no country can do that part way. I tried and it failed. Nor can any country do it all the way either. I tried that too and it failed. You are no better planners than we. I should think your economists would read what happened here. (p. 5)

Unfortunately the American government has not managed to equal the level of insight here displayed by the late and unlamented Reichsmarschall. The Obama administration brought suit against

a proposed merger between AT&T and T-Mobile USA. According to the New York Times on August 31, 2011, stopping the merger would supposedly "help save jobs of American workers." (p. 24)

To this contention, DiLorenzo offers a brilliant riposte. Just as the mercantilists wrongly thought that the way to national wealth was to amass gold and silver, so do the modern opponents of economic progress falsely believe that full employment requires that existing jobs be conserved: "The Obama mercantilists apparently believed that existing jobs, not gold, must be hoarded" (p. 25).

They [the Obama administration] failed to recognize that the economy is dynamic, with jobs constantly being created and destroyed as new-and-improved industries and business practices replace the older and less efficient ones (efficient in serving consumers, that is). (p. 25)

DiLorenzo supports the Austrian analysis of the business cycle over the monetarist view of Milton Friedman, but this fact does not prevent him from making use of Friedman's apt insights on other topics. Thus, writing about the current healthcare crisis, he calls attention to an important study Friedman published in 1992:

Friedman noted that 56 percent of all hospitals in America were privately owned as for-profit enterprises in 1910.… It took decades, but by the early 1990s government had taken over nearly the entire hospital industry.… Friedman's key contention was that, as with all bureaucratic systems, government-owned or government-controlled healthcare created a situation whereby increased "inputs" such as expenditures on equipment, infrastructure, and the salaries of medical professionals, actually led to decreased "output" in terms of the quantity and quality of medical care.… This kind of result is present in all government-run bureaucracies because of the absence there of any kind of market feedback mechanism. Since there are no profits in an accounting sense in government, there is no reliable mechanism for rewarding good performance and penalizing poor performance. (pp. 26–7, emphasis in original)

if the average tariff rate in America were a few percentage points lower than it would otherwise be thanks to influence of academic economists, that would more than justify all of their salaries and then some because of the wealth-enhancing effects of freer trade. (p. ix)

In order fully to benefit from free trade, peaceful relations among nations are obviously desirable if not outright essential. There have been cases of warring nations that continued to engage in trade; but, obviously, states engaged in war are concerned with other things than social cooperation through the free market. If a nation wishes to gain as much as possible from trade, then, it seems well-advised for it to pursue a foreign policy of peace.

So much seems simple commonsense; but those who advocate such a policy are often smeared as "isolationists." DiLorenzo quite properly points out that this name entirely reverses the truth. It is the supposed isolationists who favor the greatest attainable commerce with other nations, and it is their interventionist opponents who disrupt trade by involving us in unnecessary wars. He suggests calling such people "instigationists":

War leads to isolationism. People interact peacefully and beneficially in the free market; they kill each other when they are at war.… The real "isolationists" who seek to destroy the peaceful cooperation among the people of the world are a group of people who might be called "instigationists." They are the egomaniacs and rent seekers … who instigate wars with their lying, conniving, and manipulating behavior. They typically have never participated in a war, or even the peace-time military, themselves, and are deservedly labeled as "chickenhawks" by many commentators.2 (pp. 45–47)

Readers of the book who expect DiLorenzo to say something about Lincoln and his war policy will not be disappointed. In pursuit of his policy of imposing the American System of Alexander Hamilton and Henry Clay on the recalcitrant Confederacy, Lincoln ruthlessly suppressed opposition. In such stifling of dissent, he was joined by the Radical Republicans in Congress.

In telling the story "of how the Republican Party engaged in a Stalinist spasm of political repression" (p. 91), DiLorenzo makes apt use of a book by the Lincoln scholar William Marvel, Lincoln's Darkest Year: The War in 1862. In one respect, I fear, he has been misled by his source. The Republican-controlled Senate in 1862 expelled one of its most senior members, the Democrat Jesse Bright of Indiana. Following Marvel, he says,

Using the excuse that, in the years before the war, Senator Bright "had known and admired [fellow Senator] Jefferson Davis of Mississippi," the Republican Party accused Senator Bright … of "retroactive treason" and expelled him with a bare two-thirds majority vote. (p. 91, quoting Marvel)

There was rather more to it than that. An arms dealer had been apprehended who had on his person a letter of introduction to Davis, written by Bright. This was the principal charge that led to the expulsion.

Nevertheless, Marvel and DiLorenzo are on firm ground in their general condemnation of the Republican policy of repression.

Even Democrats running for Congress were imprisoned before election day.… Republican Party thugs were not above beatings and murder of Northern civilians who dissented from the "Grand Ole Party" line. (p. 92, emphasis in original)

Unfortunately, matters only worsened as the war continued.

DiLorenzo views with shrewd skepticism attempts by his fellow economists to provide theoretical justifications for interference with the free market. The much-ballyhooed area of "happiness research" has proved a fertile source of such justifications, and DiLorenzo rejects them all.

Regardless of the success of the free market in generating an ever-increasing abundance of material goods, happiness researchers such as the Swiss economist Bruno Frey complain that increases in wealth do not always carry with them increases in happiness. Instead of exclusive concentration on raising production, policymakers should endeavor more directly to address the sources of unhappiness. For example, even if poor people get more money, they may find upsetting the still-greater wealth of the rich. Do we not have here a reason for remedial action by the state? The negative externalities that result from disparities in wealth should not be ignored.

DiLorenzo responds that the

assertions about the supposed ability of happiness researchers to finally measure utility simply ignore all the reasons that have been accepted for decades by the economics profession as to why utility is "ordinal" instead of cardinal and not measurable. (p. 186)

Happiness researchers often make use of public-opinion surveys in their attempts to determine levels of happiness, and against them DiLorenzo invokes the weighty authority of Murray Rothbard:

Not only will a person's valuation differ when talking about them [choices] from when he is actually choosing, but there is also no guarantee that he is telling the truth. (p. 187, quoting Rothbard)

As to the supposed negative external effects on the poor imposed by the wealthy, DiLorenzo makes a penetrating observation:

The supposed "negative external effect" is the envy by poorer people. But it has always been true that intellectuals, not the poor, have been the chief advocates of egalitarianism. Most poor people want to become richer. It is the intellectual class that is so often obsessed with envy and hatred of people who are more financially successful than they are. That they can manipulate survey questions that are used to make it appear that this view comes from "the poor" and not themselves does not make this statement untrue. (p. 189)

Organized Crime is an outstanding presentation of the main themes of DiLorenzo's career as a scholar. Anyone who values a historically informed and well-written defense of freedom will gain a great deal from reading the book and absorbing its lessons.